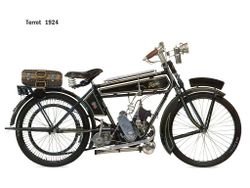 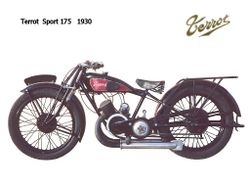 Terrot was a motorcycle manufacturer in Dijon, France.

Charles Terrot and Wilhelm Stücklen had founded a machinery factory in Cannstatt, Germany in 1862, and Terrot added a branch factory in Dijon in 1887, and in 1890 the Dijon factory added bicycles to its products.

In 1902 the Dijon factory made its first motorcycle, powered by a 2 bhp engine supplied by Zédel of Switzerland. Thereafter Terrot built motorcycles with engines from 173cc to 498cc from proprietary engine suppliers including the Swiss manufacturers MAG and Dufeaux, and the English makers Chater-Lea, Givaudan and JAP.

After the Great Depression a new vehicle class, motorized bicycles, was launched. In 1932 Terrot entered motorcycle racing and won a triple championship, winning the French 250cc, 350cc and 500cc classes. In the Second World War Terrot supplied the French Army with sidecar outfits, the model GT from 350cc to 750cc and the model DT from 500cc to 750cc.

In 1951 Terrot made its first motor scooter, and in the 1950s the company concentrated on the market for mopeds and lightweight motorcycles. In 1958 Peugeot took over the company, and in 1961 production at the former Terrot factory was terminated.