Trail, or caster, is the horizontal distance from where the steering axis intersects the ground to where the front wheel touches the ground. The measurement is considered positive if the front wheel ground contact point is behind (towards the rear of the bike) the steering axis intersection with the ground. Most bikes have positive trail, though a few, such as the Python Lowracer have negative trail. 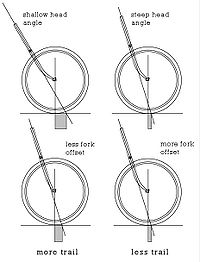 The relationship between head angle, rake and trail in a bicycle

Trail is often cited as an important determinant of bicycle handling characteristics [1], and is sometimes listed in bicycle manufacturers' geometry data, although Wilson and Papodopoulos argue that mechanical trail may be a more important and informative variable.

Trail is a function of head angle, fork offset or rake, and wheel size. Their relationship can be described by this formula:[1]

where <math>R_w</math> wheel radius, <math>A_h</math> is the head angle measured clock-wise from the horizontal and <math>O_f</math> is the fork offset or rake. Trail can be increased by increasing the wheel size, decreasing or slackening the head angle, or decreasing the fork rake or offset. Trail decreases as head angle increases (becomes steeper), as fork offset increases, or as wheel diameter decreases.

Trail can vary as the bike leans or steers. In the case of traditional geometry, trail decreases (and wheelbase increases if measuring distance between ground contact points and not hubs) as the bike leans and steers in the direction of the lean.[2] Trail can also vary as the suspension activates, in response to braking for example. As telescopic forks compress due to load transfer during braking, the trail and the wheelbase both decrease.[3] At least one motorcycle, the MotoCzysz C1, has a fork with adjustable trail, from 89 mm to 101 mm.[4]