The engine was a liquid cooled in-line three, four-stroke. A 79.0mm bore x 65.0mm stroke result in a displacement of just 955.0 cubic centimeters. The engine featured a 12.0:1 compression ratio. Fuel was supplied via a double overhead cams/twin cam (dohc).

The bike has a 6-speed transmission. The final drive was via chain. Power was moderated via the wet. multi-plate.

It came with a 120/70-zr17 front tire and a 190/50-zr17 rear tire. Stopping was achieved via double disc in the front and a single disc in the rear. The front suspension was a 45mm forks with dual rate springs and adjustable preload. compression and rebound damping while the rear was equiped with a monoshock with adjustable preload. rebound and compression damping. The Daytona 955i was fitted with a 5.28 Gallon (20.00 Liters) fuel tank. The bike weighed just 421.08 pounds (191.0 Kg). The wheelbase was 56.14 inches (1426 mm) long.

The bike has a Gears transmission. Power was moderated via the Wet, multiplate.

It came with a 120/70 ZR 17 front tire and a 190/50 ZR 17 rear tire. Stopping was achieved via Twin 320mm floating discs, 4 piston calipers in the front and a Single 220mm disc, 2 piston caliper in the rear. The front suspension was a 45mm forks with dual rate springs and adjustable preload, rebound and compression damping while the rear was equipped with a Monoshock with adjustable preload, rebound and compression damping. The Daytona 955i was fitted with a 5.28 Gallon (20.00 Liters) fuel tank. The bike weighed just 421.08 pounds (191.0 Kg). The wheelbase was 56.1 inches (1425 mm) long. 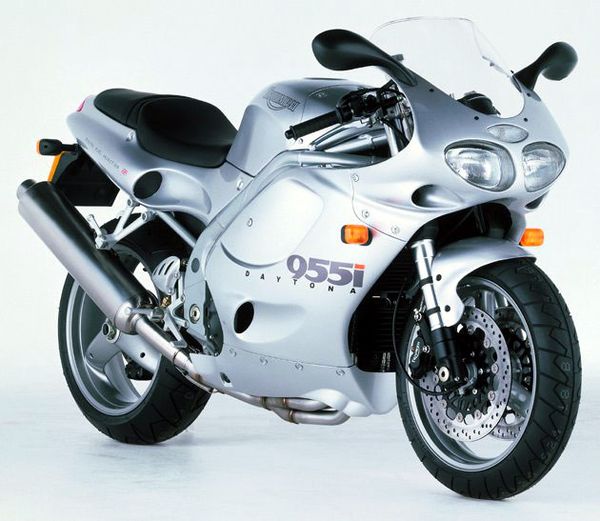 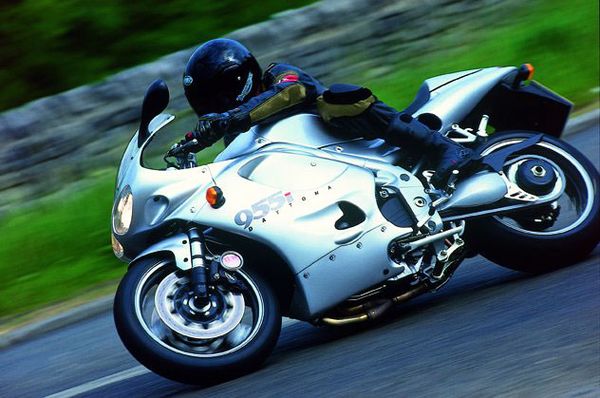 The Daytona 955i was one of the first Triumphs which moved away form the classic modular design, and introduced a sporty, performance-focused frame. While the Daytona 955i had to be able to deliver top-notch performance mimicking the race bikes, Triumph did not neglect the practicality required for everyday riding.

This is why the 1999 Daytona 955i boasts such exhilarating power and torque delivery to match other liter-class bikes on the track and is equally rewarding on the road. With the racing-derived frame complemented by powerful and manageable brakes, the bike also comes with great stability. The 1999 model comes with a shorter wheelbase, revised gear shifting and a new ECU. 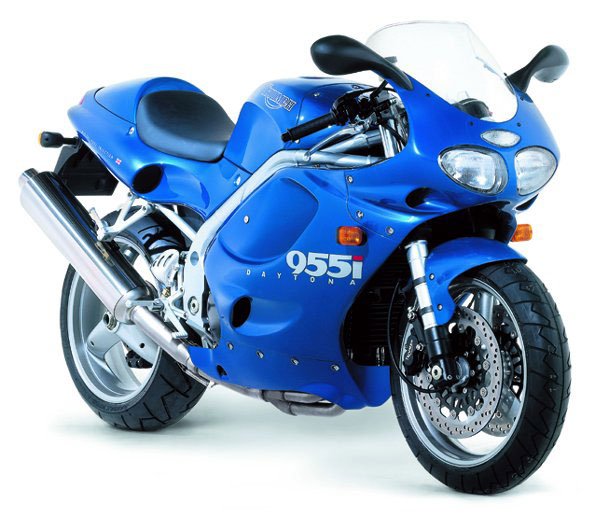 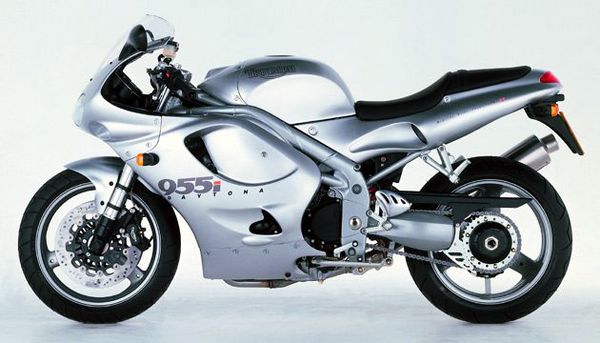 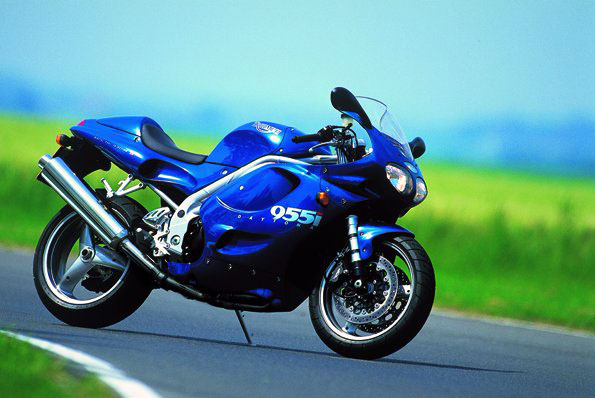 The 955cc 3-cylinder engine of the 2000 Daytona 955i has been developed by Triumph with support from another British motoring icon, Lotus. Boasting one of the most advanced designs in the two-wheeled sport, this engine packs significant power while remaining lightweight. A race track-specced motorbike, the Daytona 955i comes with exceptional handling, yet its streetability remains intact.

Great for racing on the track, the 2000 Daytona 955i is a bike with daily practicality, too. And if you want to add high-performance aftermarket parts, such as high-flow exhausts, the programmable ECU is easy to tune for optimal power deployment and reliability. 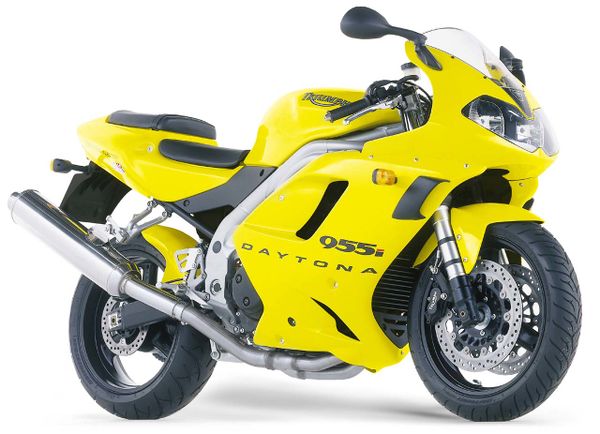 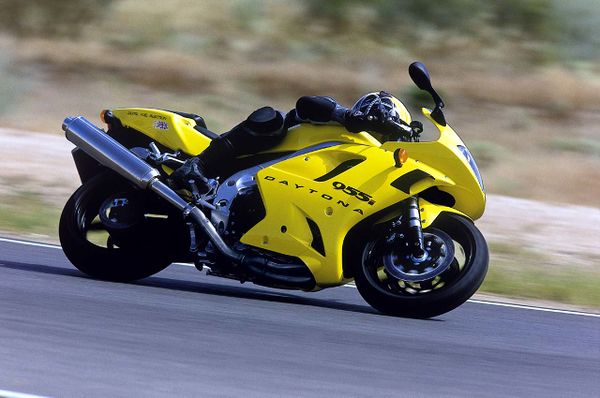 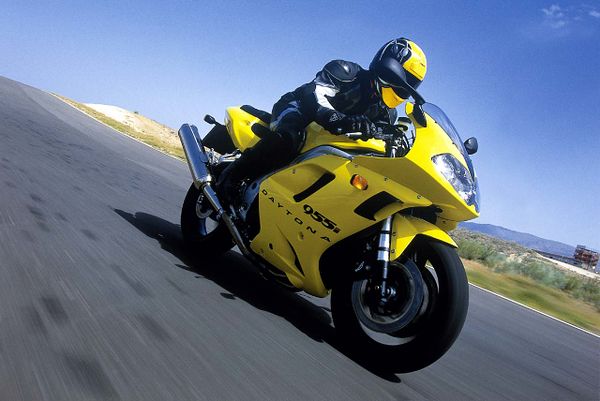 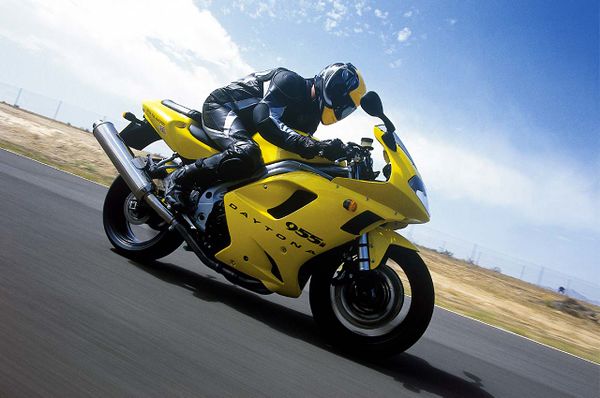 The Daytona is the flagship sport bike in triumph's roster, and the 2001 iteration of the 955i machine stands proud and proves things are for real. A superbike designed to put riders in control of track-derived performance, the 2001 Daytona 955i comes with subtle bodywork revisions, while chassis updates add a steeper steering geometry for precise cornering.

Fully-adjustable suspensions, a shorter wheelbase and a lighter swingarm add to the maneuverability of the 2001 Daytona 955i, and the new Acidic Yellow color option makes sure you won't go unnoticed. 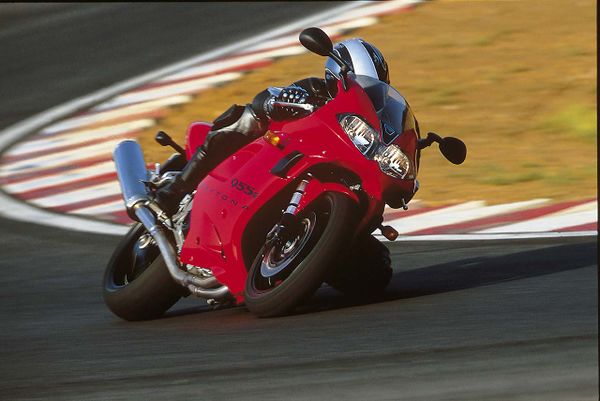 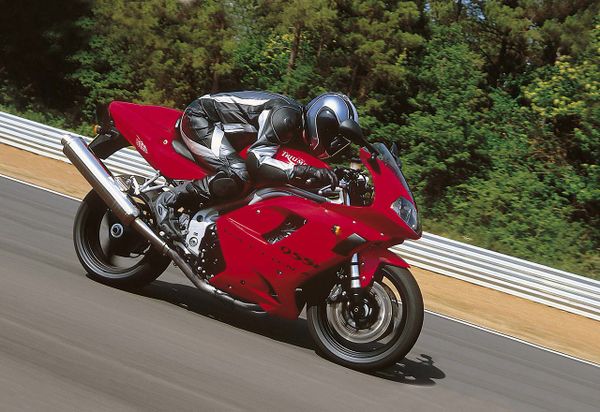 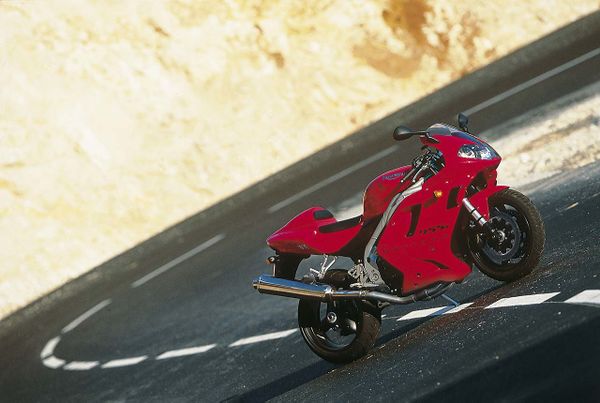 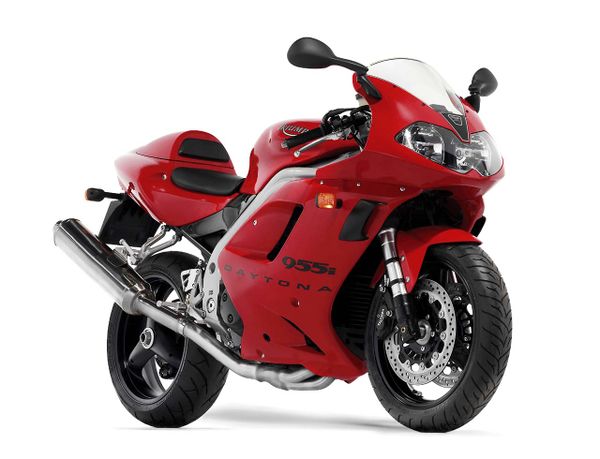 With its liter-class 3-cylinder engine, the 2002 Daytona 955i is Triumph's endeavor to add as much streetability as possible to a race-bred motorcycle. With the geometry and steering being both rewarding for hard riding on the track and usable for the casual rider on the open road, the 2002 Daytona 955i also comes with a wide range of sport accessories, racetrack-only ones included.

The 2002 model year also sees the Daytona 955i coming back to the single-sided swingarm, while a new Jet Black color for the carbon fiber fairing adds even more character to this superbike. 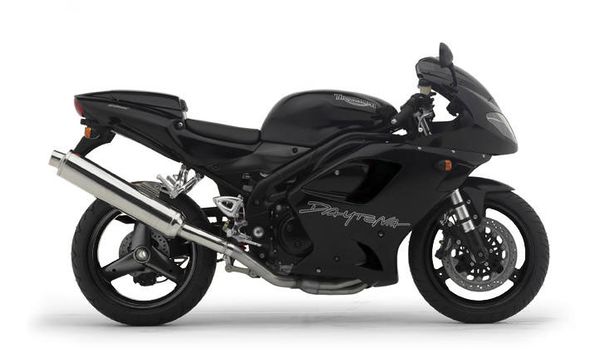 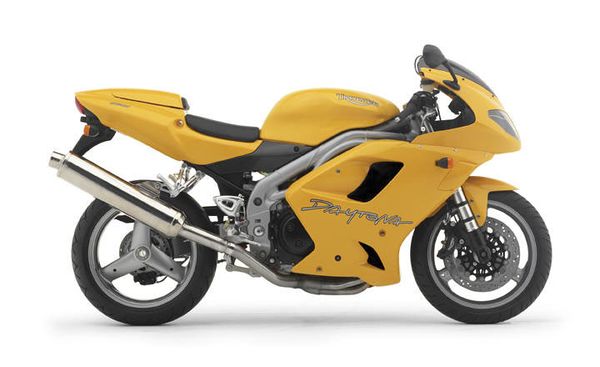 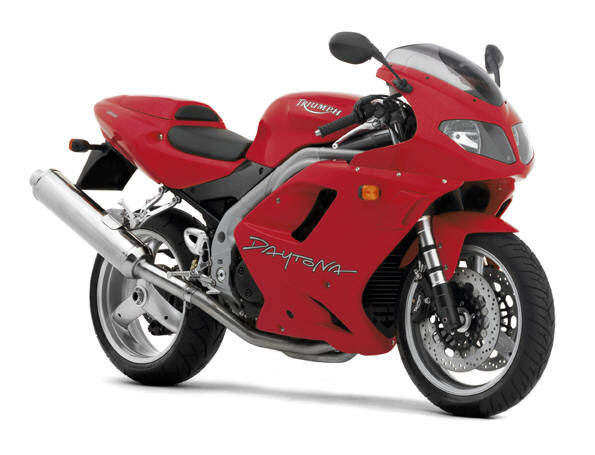 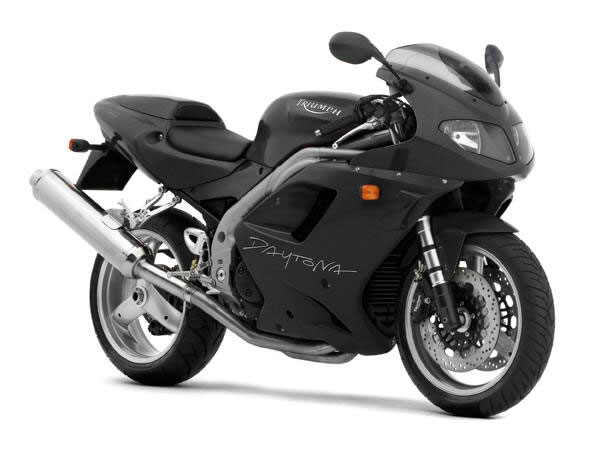 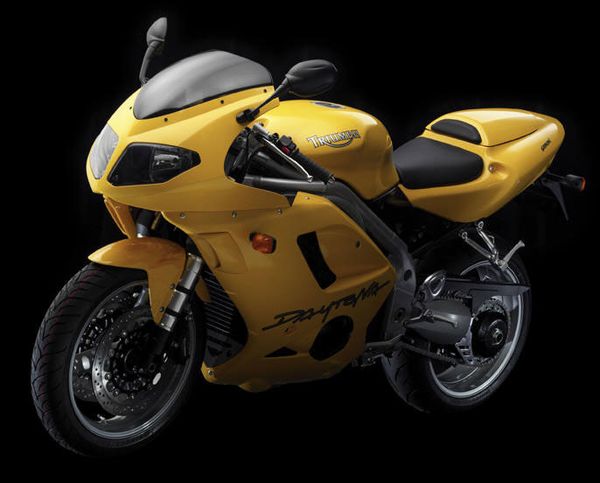 2003 brings a lot of revisions to the Triumph Daytona 955i, making this bike look sleek and add even more tho the already nifty aesthetics. Aerodynamics have been improved by means of a redesigned cockpit and seat hump, while the cockpit infill was also updated. The air intakes are now color-matched, and the headlights have received a new shape. 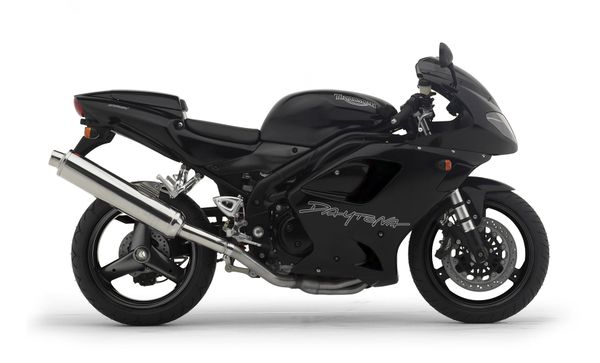 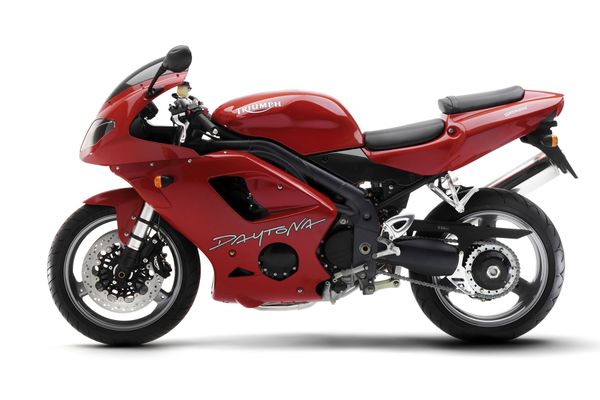 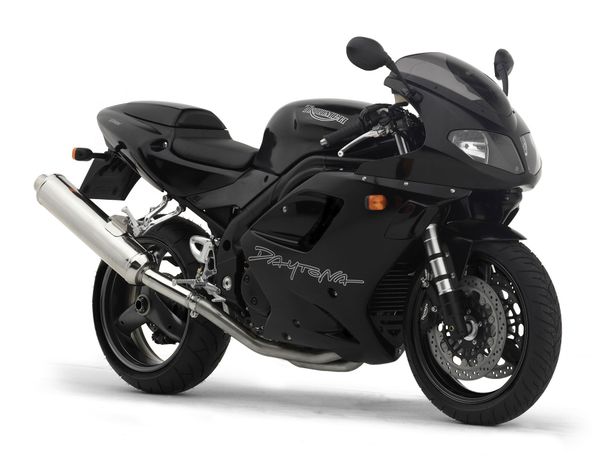 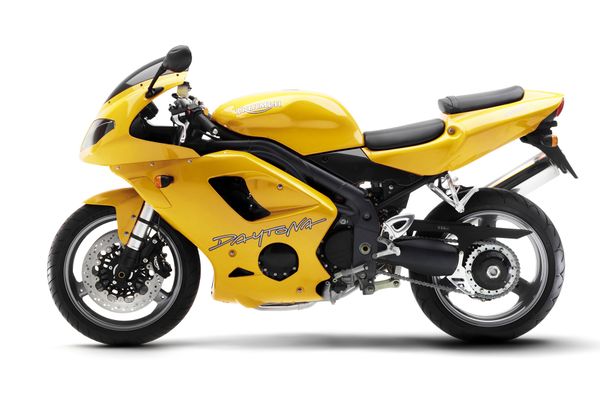 The bigger brother of the 2004 Daytona 650, the 955i also comes with all the race-worthy character of a liter-class in-line 3-cylinder engine. created to deliver exceptional power delivery on the track and on the streets alike, the Daytona 955i boasts on an impressive mix of sport performance and rewarding riding experience, balancing brute power and streetability for an exquisite overall character

Add in the more comfortable riding position, adjustable suspensions and the optional touring-oriented accessories for an even more surprising long-distance real-world sports bike. 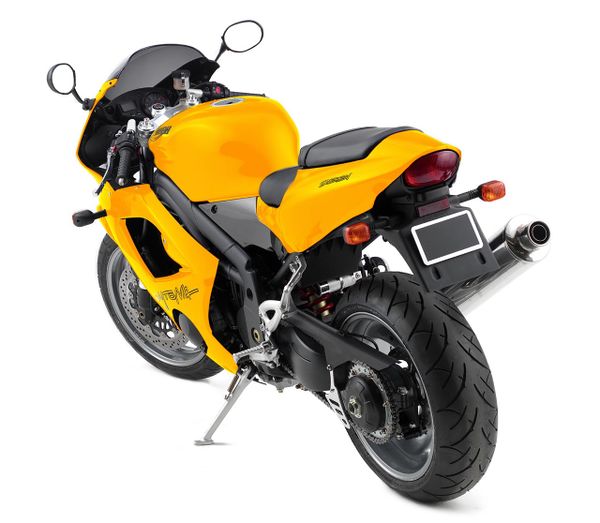 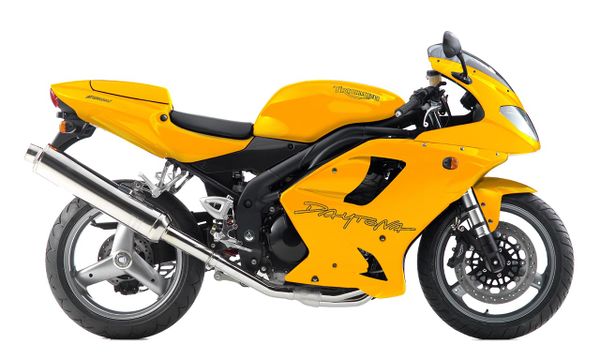 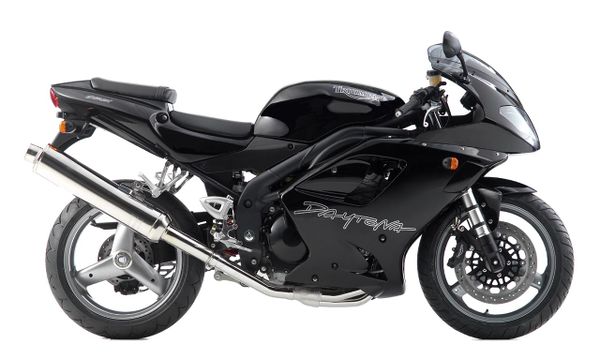 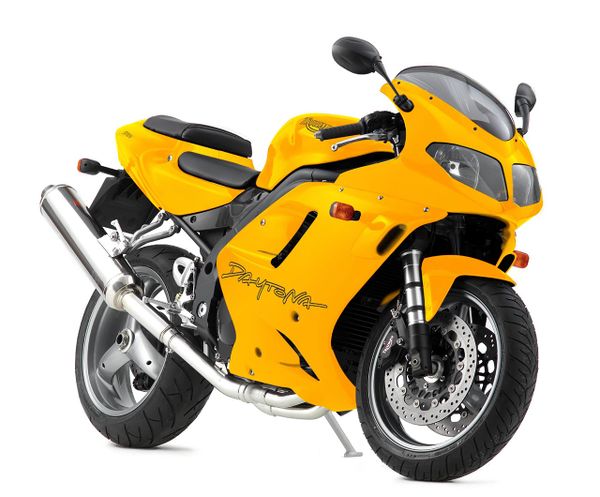 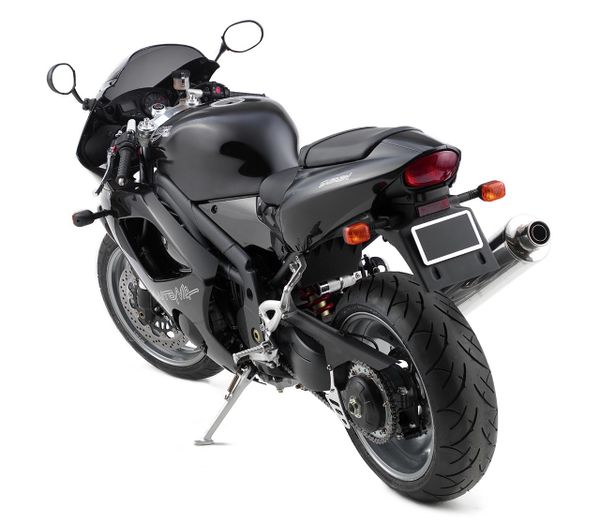 This is the last version of the 955cc Daytona Triumph produced, and then the series moved down to the superport-class displacement (675cc). However, even this final model got a lot of new things, such as new cylinder heads and new crankcases, with relocated coolant routing for a neater-looking engine.

The gear change internals were also updated, just like the swingarm, while the backlash eliminator gear was added for reduced noise and less vibrations. Scorched Yellow was added to the color roster.