The bike has a 3-speed semi-automatic transmission. 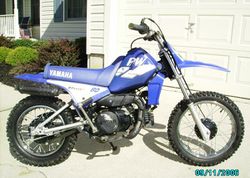 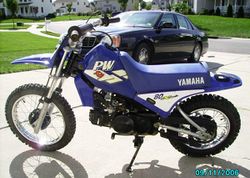 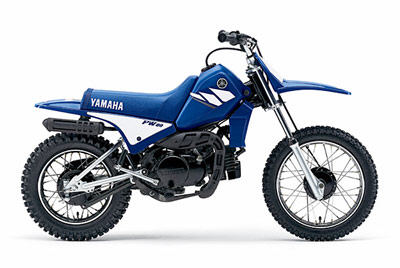 The PW80 is step two in a young rider's career, but in case your kid starts riding a bit later, it will be an awesome first bike, as well. This machine introduces shifting, as it comes with a 3-speed transmission, but operation is easy, since it comes with an automatic clutch making take-offs smooth and reassuring.

Adults can adjust the throttle limiter to provide youngsters with a progressive learning curve and puts them in control of one of the mot important feature in motorcycling: safety.

The PW80 ups the ante a bit, packing even more punch for the young riders, while retaining the automatic clutch and a smooth-shifting 3-speed transmission, allowing riders to focus on control rather than on clutch work, and providing an excellent introduction to shifting. The power deployment can be easily controlled by adults thanks to the adjustable limiter, while the Autolube fuel and oil injection system eliminates the need to pre-mix them.

Low and rugged, the 2003 Yamaha PW80 is built to take a lot of abuse and still run great for generations to come. 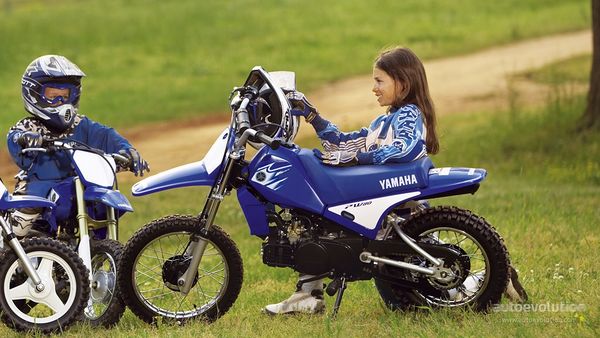 The 2005 PW80 is Yamaha's offer to those who have outgrown the entry-point PW50 bike. Alongside the increased displacement and power, the PW80 also brings a 3-speed transmission. Shifting is smooth as the clutch is automatic, allowing the young riders to focus on learning how to use the different power and torque deployment schemes and forget about the clutch work for a while.

PW80 also comes with a 2-stroke engine which packs plenty of punch despite its small displacement and the same adjustable exhaust restrictor to allow adults to tailor the engine power according to the rider's skills.

A step up from the PW50 entry-level machine, the PW80 packs some extra displacement and slightly bigger dimensions, plus a 3-speed transmission with an automatic clutch. The semi-automatic gearbox is teaching kids about the various power and torque delivery scenarios for different sections, providing a highly educational environment to have them prepared to use a manual clutch in the future.

The bike retains its bulletproof engineering and is ready to take massive abuse. Which it will, too, as kids will definitely want to spend as much time as possible in the saddle.

Rugged, reliable, fun to ride and by all means, unintimidating and easy to operate, the 2011 Yamaha PW80 comes with a brawny 80cc 2-stroke engine which delivers quite a punch. A 3-speed semi-automatic gearbox makes riding this bike very intuitive, thanks to the clutchless shifting, while allowing the youngsters to get used to the various power and torque needs for different terrains.

The chassis is sturdy but light, made from high-grade tensile steel, but still keeping the weight of the bike in the small numbers. Strong steel rims and knobby tires make sure the 2011 PW80 is ready to tackle both dirt tacks and forest pathways, while still be a great ride for the backyard.