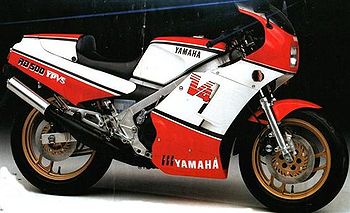 The RD 500LC was the first real racer on the road. It debuted in June 1984 and few people had seen anything like it, a V4 500cc two stroke with 2 pipes coming out under the seat. Built around a box-section steel frame "witch we in the UK were cond with as others had a nicer Alloy framed one". The bike had a horazontel shoker and operated via bell-crank. Up front were slab yokes and anti-dive forks "whitch dont work very well at all as it turned out". Braking was by 3 solid faced but ventealated discs, " theys are the same fitmets as the 350 YPVS and the same bolt holes, they can be inter-changed". The brake callipers are the same as well, which left it a litle short in braking. The 350 could do with a bit more so you can imagine what a 500 felt like with the same stopers. "Scary".

The expanshons ran the same as any others from the front pots but the rear chambers ran under the seat and side panels and exited either side of the tail light. This made the 500 instantly recognisable if you camr across one from behined.

Although short lived in the UK enough RD500's were sold to make them a reasonably common site on the roads at that time. The RG 500 stole the thunder out of the RD as it was imported with an alloy frame and was a little faster and a slightly better bike. But the brakes wre still crap and the Suz anti dive was just as slopy as the RD , so it realy all came down to looks, and the RD500 YPVS wins hands down there.