Difference between revisions of "Yamaha Stryker"

The engine was a liquid cooled v2, four-stroke. A 100.0mm bore x 83.0mm stroke result in a displacement of just 1304.0 cubic centimeters. Fuel was supplied via a single overhead cams (sohc). 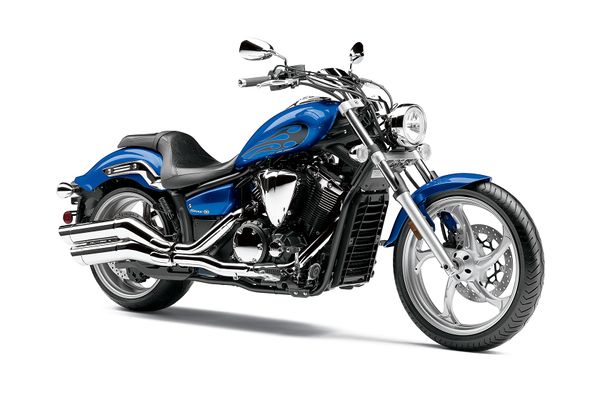 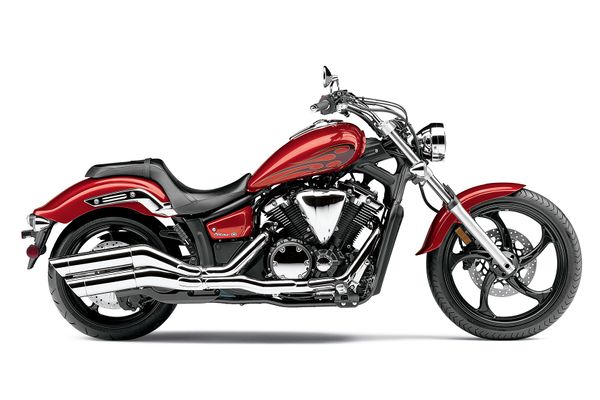 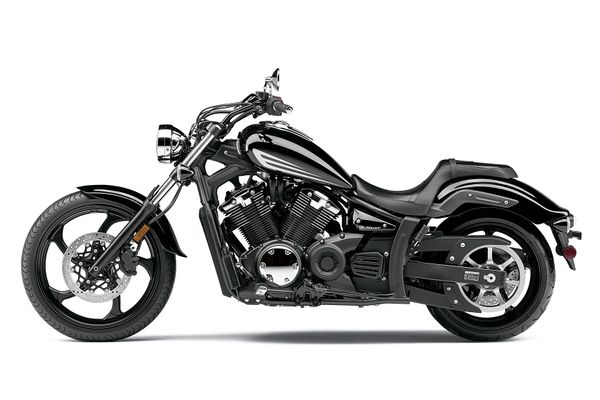 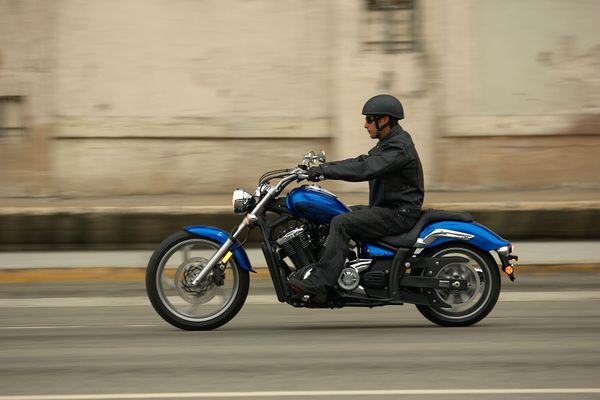 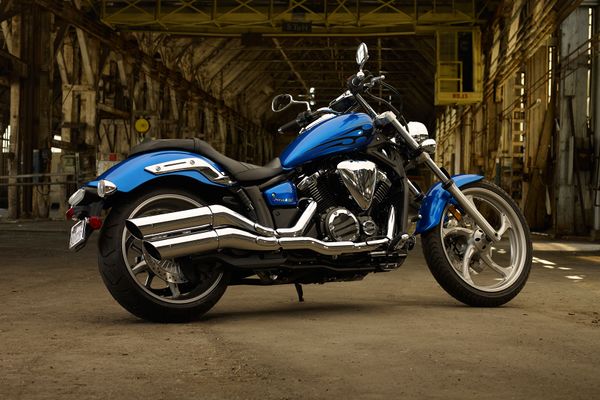 Newly introduced, the 2011 MY Stryker is the perfect machine for those who long for the cool custom looks of the Raider, but are looking for a more moderate displacement and lighter build. Sporting the same head-turning effect, the Stryker looks awesome straight from the box.

Unlike its bigger siblings, the Stryker has a liquid-cooled engine with a shorter stroke, but the looks are all-traditional air-cooled, while the EFI system provides crisp acceleration and optimized fuel consumption. The bike retains the hardtail looks, but the premium suspensions provide a plush ride in great style. 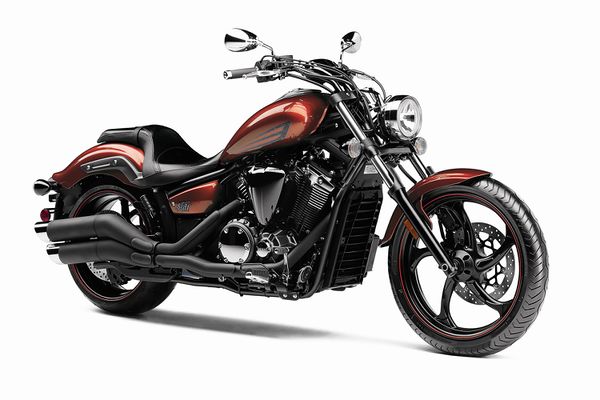 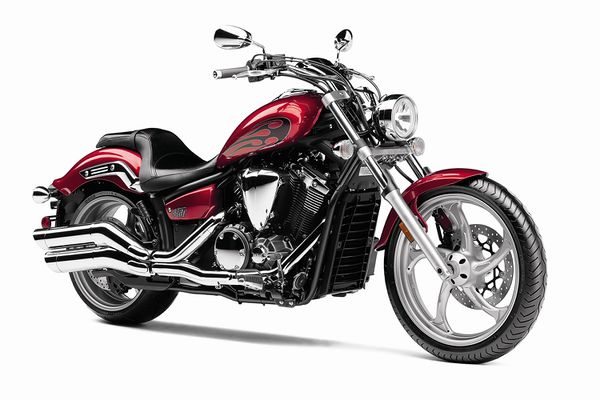 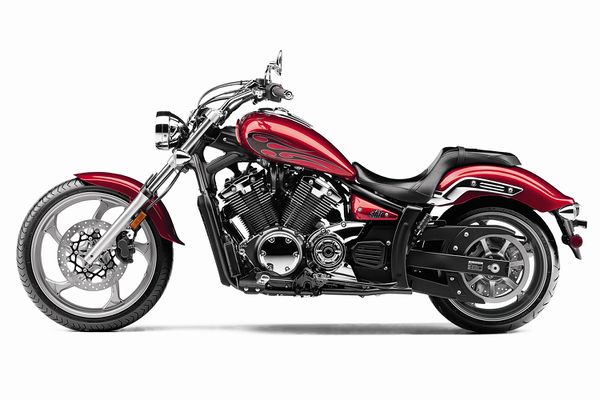 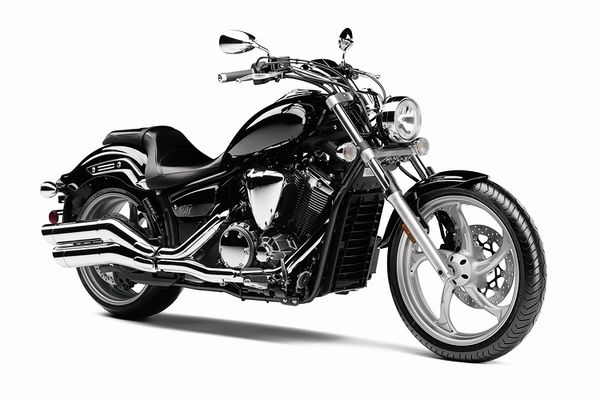 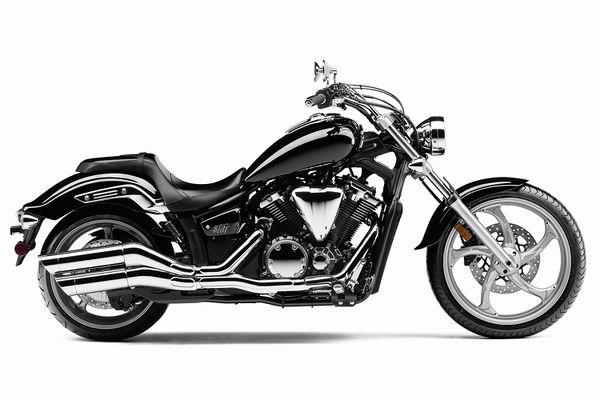 The 2012 MY Yamaha Stryker is a reinterpretation of the iconic chopper, only using 21st century materials, engineering and design ideas. While this bike screams its modern-era emblematic character, it still retains the heritage of old-school choppers and the radical road aggressiveness. The 34-degree fork rake is complemented by some 6 extra degrees of the yoke for a killer look.

Massive and compact, the 2012 MY Yamaha Stryker is the perfect street carver: it boasts a zero-compromise attitude and the 21” front wheel leaves no room for jokes. Together with the 1304cc V-twin ending in dual fat exhausts and the classic pulled-back handles, this bike has clearly been built for hard riding, and not for slow show-off cruises.

And the tall fuel tank seems to dwarf the generous headlight for an even more aggressive look. A wide range of accessories is available for an even meaner look. 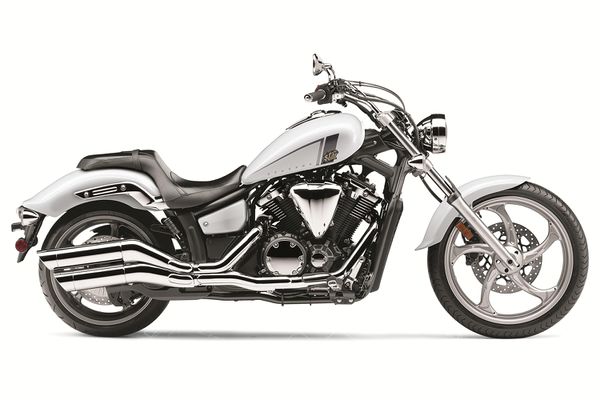 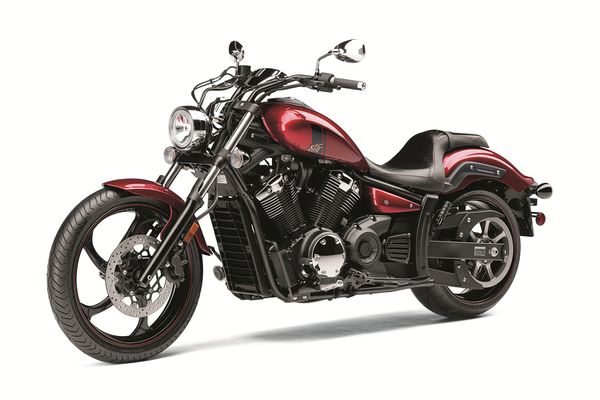 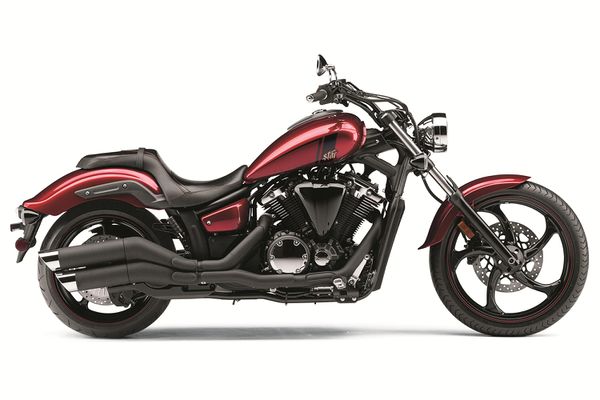 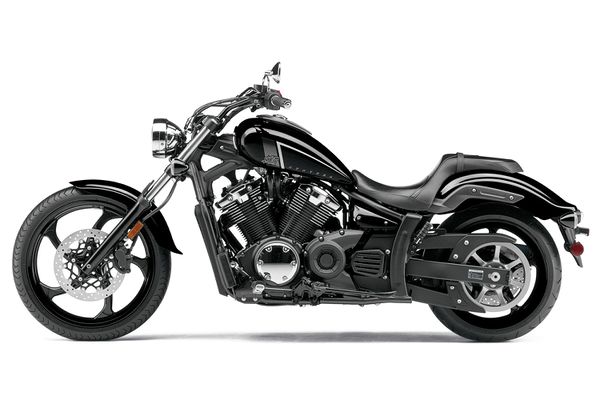 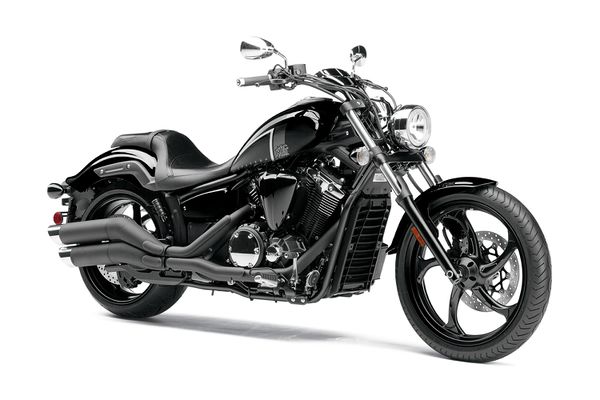 The 2012 Yamaha Stryker is all about creating a 21st century chopper retaining the iconic styling of the classic ones, but using the modern-era technology and materials. The resulting bike is a stunning combination between the two ideas, sporting a jewel-like finish and impeccable Star-grade craftsmanship, while boasting top-drawer components and tons of aggressive character.

With a 40-degree rake (6-degree yoke) and massive pulled-back handles matching the sculpted low seat, the 2012 Yamaha Stryker makes no compromise in terms of character. An old-school 21” front wheel is a nice complement for a 1304cc V-twin engine and the tall tank which seems to dwarf the headlight. 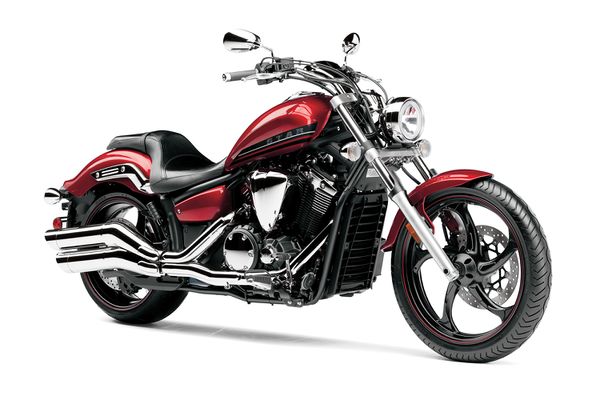 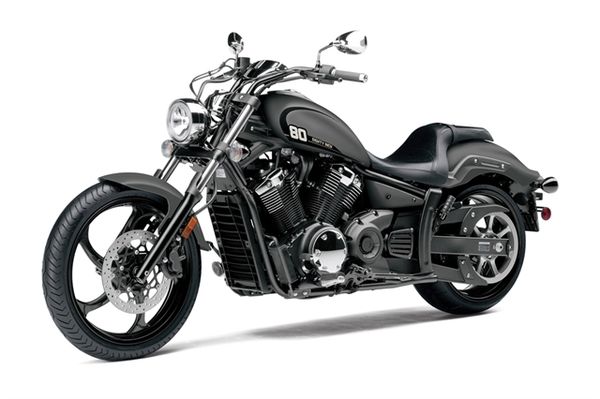 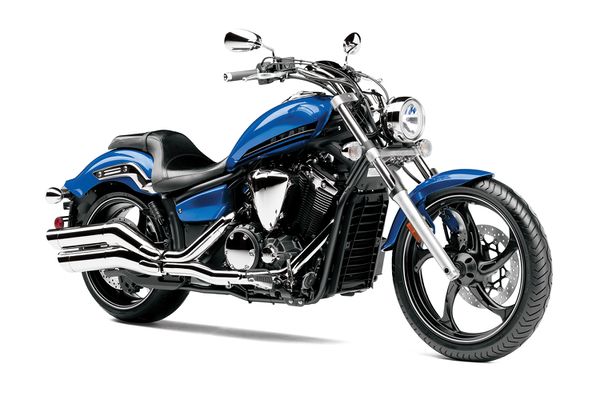 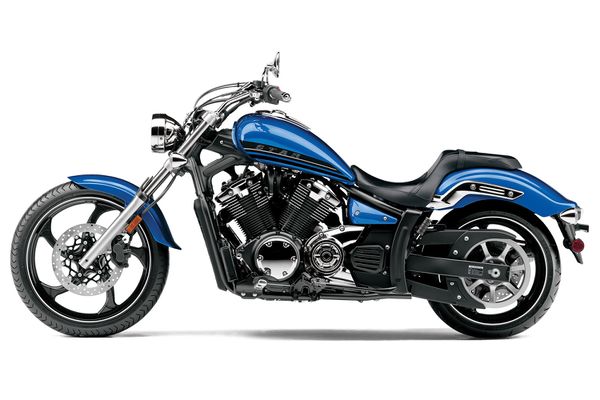 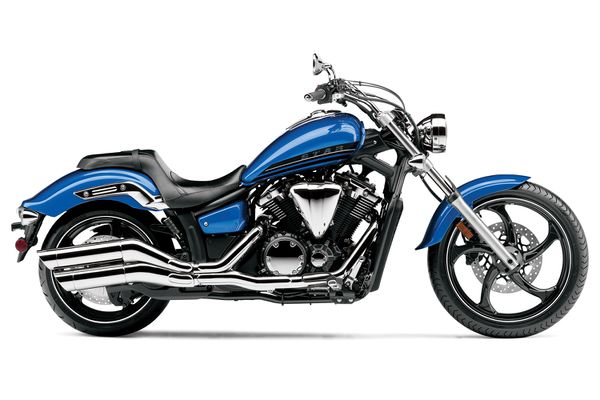 Compact and aggressive, the 2013 Star Stryker is a perfect display of bike engineering: with a 40-degree rake for premium chopper looks and a majestic road stance, the bike still boasts an impressively strong custom look backed up by the plethora of carefully-designed accents and proportions. With the seat positioned low in the frame, riding this bike will be an easy task even for the smaller riders as it offers a good ground contact. With handlebars reaching back to the rider and arching beautifully above the tank, the 2013 Stryker displays very clean lines and a massive, commanding stance.

The liquid-cooled v-twin is mated to a 5-speed gearbox and hassle-free belt drive for a rewarding experience with minimal fuss. The 5-spoke wheels are surely going to turn a lot of heads as they aren't anything like your off-the-mill every day units: finished in glossy black, their flowing design adds to the overall custom feel, just like the slash-cut 2-into-2 beefy exhausts. 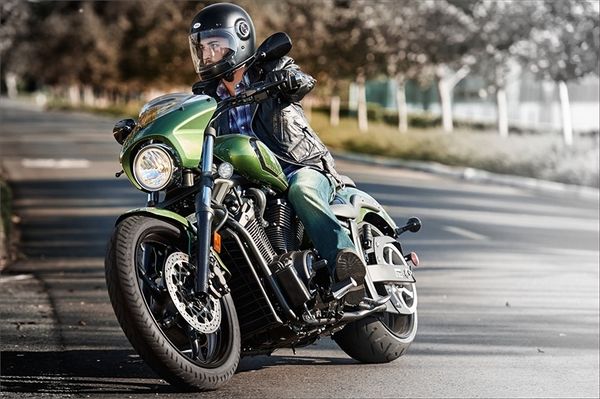 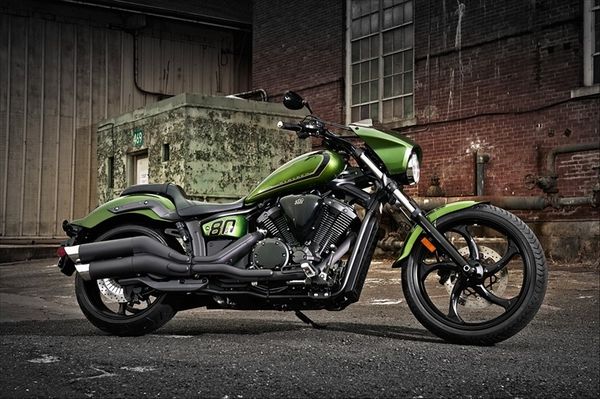 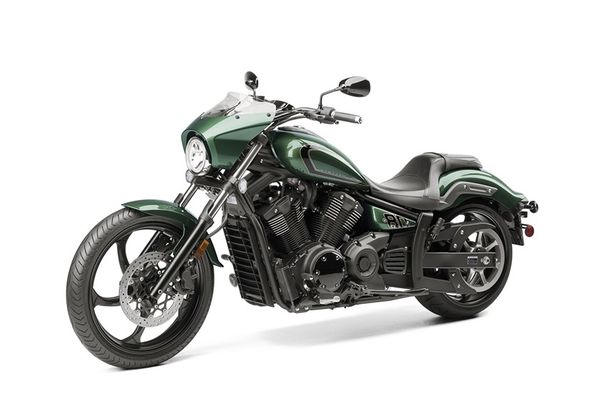 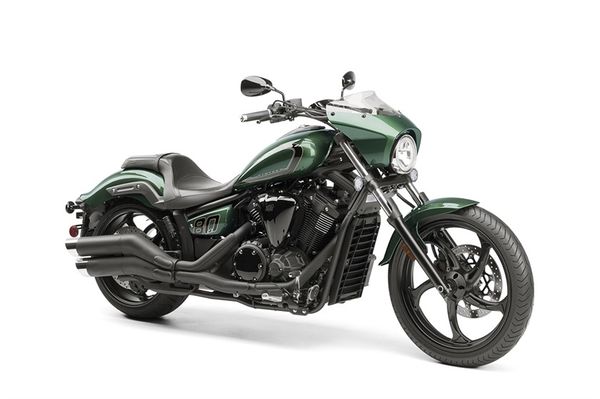 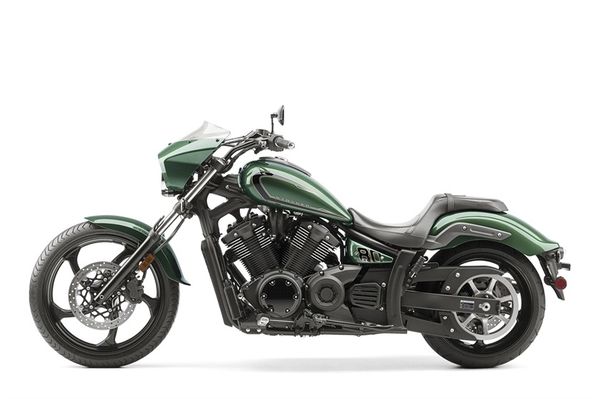 For riders who want better protection from the elements, Yamaha launched the new, 2015 MY Stryker Bullet Cowl. As the name suggests, this bike features a bullet-shaped cowl with a small windscreen, the cowl adds a more aggressive touch to the cruiser, while in the same time offering better protection for the rider.

In the tech/engine department, it sports a liquid-cooled, 1304cc V-twin that delivers asphalt-crushing amounts of power and thrust. Whether on winding mountain roads or cruising at high speeds on motorways, the Stryker Bullet Cowl is up for the task. 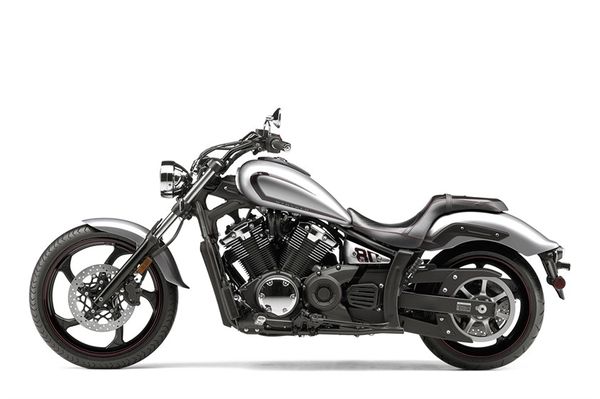 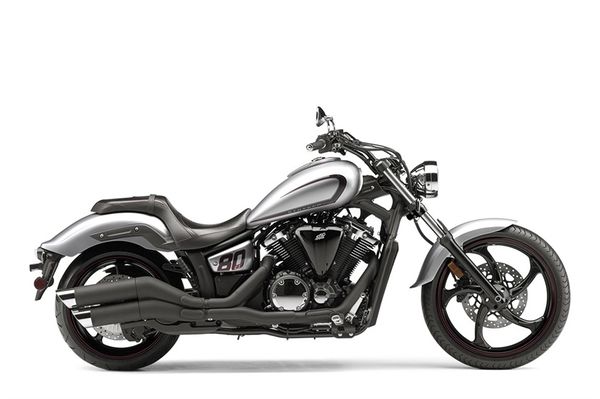 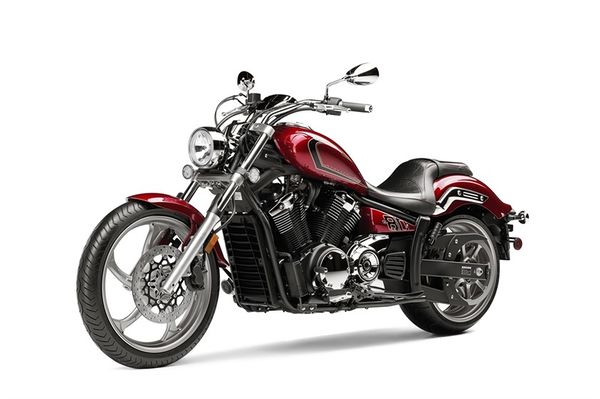 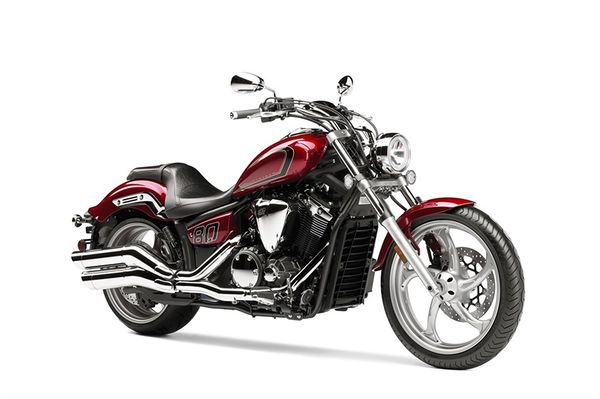 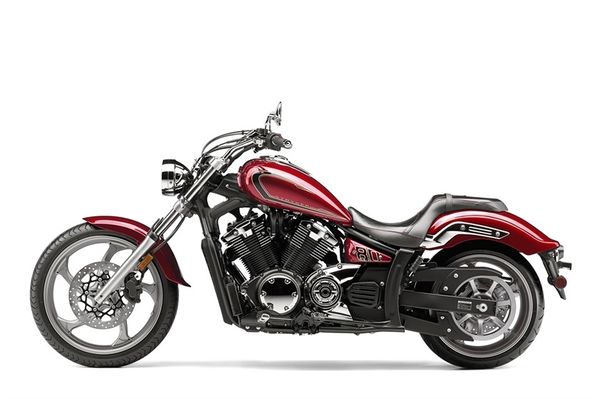 The 2015 MY Yamaha Stryker is everything a Star-class cruiser should be, with massive amounts of power, agile and light handling, custom looks, all in an affordable package. It sports a gutsy, liquid-cooled, 1304cc V-twin engine mated to a sturdy, belt-drived, five-speed manual transmission. This powerplant delivers enough power for effortless climbs on mountain roads as well as enough thrust to pass most vehicles when cruising along the motorway.

This machine does not disappoint in the aesthetics department either, featuring a radically raked out front end and a wide, 210mm rear tire, mounted on custom-like five spoked-wheels.The Stryker is available for purchase in two-trim packages, either in a flashy, high-quality chrome finish, or in an aggressive, blacked-out package.