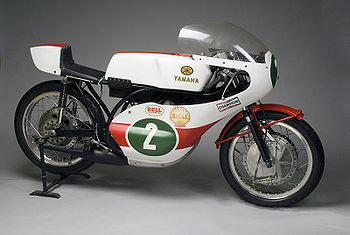 The TD2's 250cc engine was YDS6 based, producing more than 44bhp @ 11,000rpm from it's 5 port barrel. The exhaust port was raised over the TD1-C as well as being widened, the main transfer was also widened and the main inlet port actually reduced in area. Gone were the “booster port” and the notched pistons with holes in the back. The ring thickness was again reduced, now to 1mm. A new 11mm shorter exhaust also assisted in the increased power.

At last Yamaha had decided to fit decent Mikuni brand carbs, up to 30mm diameter now, allowing the jetting to be a lot more consistent under both acceleration and deceleration. Surprisingly, the factory opted to include the "Autolube" system and even a kickstarter to the bike, which were immediately removed by the vast majority of serious racers.

Chassis wise, Yamaha cleverly copied the basic layout of the classic Norton "Featherbed" frame with their RD56 works replica unit, why go past a tried and true design? The forks were replicas of the popular Ceriani style. The swingarm though, unfortunately, was mounted on loose fitting, weak, fibre bushes and flexed due to it’s thin walled tubing construction. Brakes were a double twin leading shoe front and a standard single leading shoe rear. The front stoppers had a bad habit of creating a lot of friction generated heat, which in turn caused the brakes to gradually fade. Yamaha realised this and wisely chose to fit a thumb-adjuster to allow the rider to adjust the free play of the brake lever "on the run". The fuel tank was designed to hold an extra 2 liters of fuel over the Yamaha TD1C and the seat unit made to house the "Autolube" oil reservoir. At just £900, they sold well.

An updated model, the TD2B was released in 1971, originally selling for $Aus 1,775. It still had the vertically split crankcases, though the gearing was altered, exhaust ports were widened and main transfers raised and exhausts revised to produce an additional 3bhp at 500rpm more. A few brackets were also changed but not a great deal more. 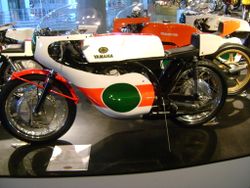