Difference between revisions of "Yamaha XS1"

The 1970 XS-1 was the first Yamaha 4-stroke model featuring a 650cc vertical, twin cylinder engine. It became extremely popular due to its reliability and high level of rider enjoyment. This took them firmly into Triumph and Honda territory with a 653cc vertical twin, overhead- camshaft model using knowledge they had gained from Hosk, a firm that came to them with Showa. Whereas the latter had introduced them to two-stroke engines with disc valves, the Hosk line included a 500cc ohc twin which was capable of 110mph and well able to run with some of the best from Britain .

The XS1 was not as quick as the Hosk and lacked its character but was a more civilized machine. It led on to the XS2 of 1972, when it was joined by two short-lived models. The first of these was the TX750, a vertical twin which introduced balance shafts within the crankcase to reduce vibration. The system was known as 'Omni-Phase Balancer' and worked well, but the machine proved unreliable and was quickly dropped. The second model, which never reached production, had a 662cc rotary Yanmar twin engine and was only seen at Tokyo shows. In 1973 the TX500 appeared with twin overhead camshafts and two years later evolved into the XS500 which sold to the end of the decade, but never in large numbers.

It came with a 3.50-19 front tire and a 4.00-18 rear tire. Stopping was achieved via Drum in the front and a Drum in the rear. The front suspension was a Telescopic Forks while the rear was equipped with a Dual Shock Absorbers. 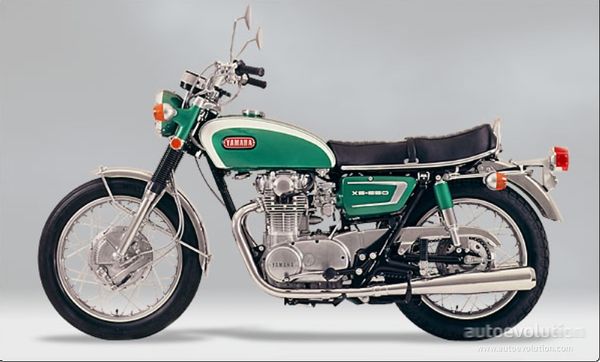