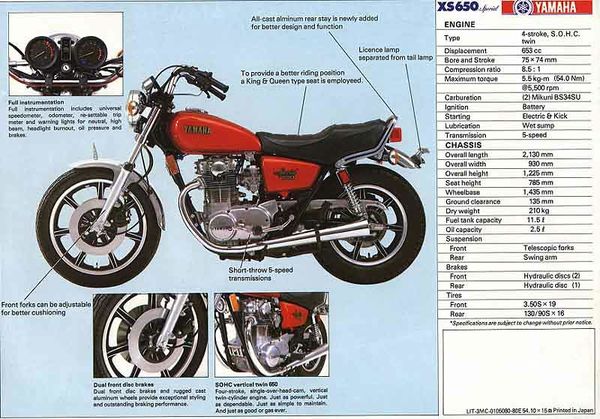 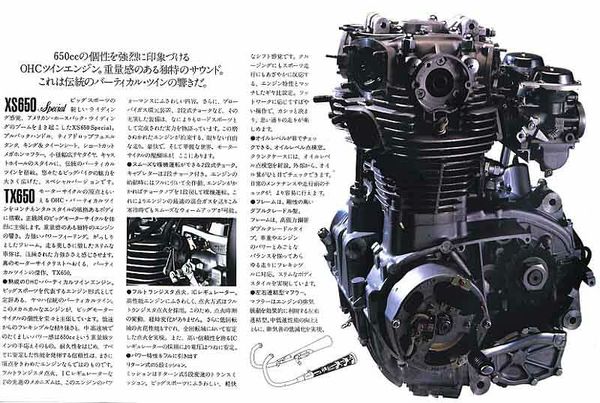 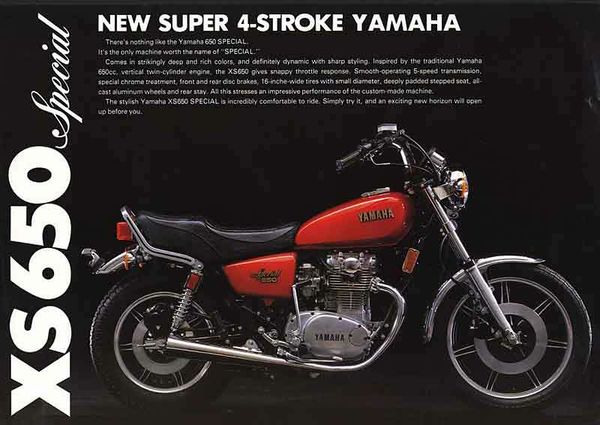 The 650cc parallel twin from Yamaha was originally launched (though not in Britain) in 1969, the same year that Honda let loose the CB750. The two couldn't be further apart since the Honda was clearly the 'new', the way forward for Japan, while the XS-1 was a copy of the British bikes the CB750 would destroy. The irony is of course that the 'copy' also went on to survive and prosper long after the bikes it was cloned from had disappeared. It was based on the BSA 650 dimensions, with 75 x 74mm bore and stroke, but it also had chain-driven overhead cam, it was soon to have an electric start and it had 36mm CV carbs. The engine even looked good. It was heavy, at a final 4671b, and power was slowly strangled by emission controls down to 50bhp, but it was torquey and didn't leak oil. On the other hand it didn't handle too well but later models -and owner improvements - could and did make a lot of difference. The 650S custom version started a whole new industry, and is probably the most common version you will find today. Models still running should run for a while yet and will give you the 'character' of a British bike but far fewer of the hassles. Prices are steady.

First produced as the XS-1, with no electric start and with TLS brakes, a model never introduced to Britain. The first one we saw was the XS-2, in Running & Riding 1975, in garish black and orange. It had unshrouded forks and rear shocks and a single front disc, as well as an electric foot. The same year it was in turn replaced by the XS650, mechanically similar if duller styled. In 1977 came the twin-disc set-up at the front, which was reckoned to be less effective than the single disc of the XS2. In 1979 came the XS650S, a bike which can be 'thanked' for the custom craze it inspired. It intelligently reverted to the single-disc option but had stepped seat, cast wheels (a 16in at the back), 2.5 gallon tank and sold for a very competitive £1399. As late as 1982 this custom bike was still outselling all opposition.

This was, and is, a fundamentally tough motorcycle, let down by poor electrics, and handling that could shorten your life. The duplex frame stayed as it was designed for nearly a decade and wasn't realty that bad. The fault lay in the suspension and bearings. The swinging arm bearings in particular were awful plastic, through which a crudely finished spindle would grind its way. The best cure is to polish the spindle and fit Teflon aftermarket bearings. The ball-bearings in the steering head were often loose (hard to believe but true), and had to be replaced with tapered roller bearings. The front forks were fine, especially the XS650's, which had Teflon bushes, but most rear suspension was soon replaced - Konis with 95-1251b springs were favourite. It was said at the time that the 'stock ignition coils couldn't light a match', so a good kick - on the kickstarter - was often needed to get the bike going. The whole ignition system is often replaced by a Lucas Rita electronic set-up. Lucas coils were often necessary, and the NGK B-7ES plugs need replacing every 5000 miles. The engine is strong enough, given oil changes every 3000 miles. Vibration can be pile-inducing, but the bike doesn't self-destruct as a result The exhaust system does. Check for camchain noise, as this is a manually adjusted item, and listen for excessive clutch noise - fit heavy-duty springs if you can find them. Also look out for split diaphragms in the Mikuni carbs as they are prone to damage, and the engine will run roughly as a result The whole cycle was not that well finished, with thin paint and poor lacquer on the engine cases. This is good for knocking money off the price but can be remedied as you wish, either chroming, stoving or just polishing. Some people went for big-bore kits, such as the 750cc Alf Hagon conversion, which is still available, and the engine, particularly the bottom end, is quite strong enough to take it