First Yamaha Motorcycle model ever produced. Sold in Japan in its first year of production (1955). The 125cc, single cylinder, 2-stroke, streetbike had unique features including a cantilever seat, a plunger rear suspension system and a glove compartment in the fuel tank area. In Japan it was called the Red Dragonfly. Lacking motorcycle experience and seeking to build a small-capacity, high-quality product, Yamaha had chosen to copy the DKW RT125, just as BSA, Harley-Davidson and Voskhod had done before them, and this proved to be a wise decision. They added a fourth speed in the gearbox of the 125cc two-stroke engine and adopted gear primary drive. It was coded YA1 but was to be known as the Red Dragonfly because of its paint job.

The machine was an immense success, partly due to race wins at the Mount Fuji and Asama events of 1955. It was quickly joined by the 175cc YC1 and, in 1957, the 247cc YD1 twin. This too was based on a German machine, the Adler, but the design team were now allowed more freedom to incorporate their own ideas. The result was a further success and Yamaha expanded as a motorcycle firm, took over others, and began to look outside their homeland to new markets. 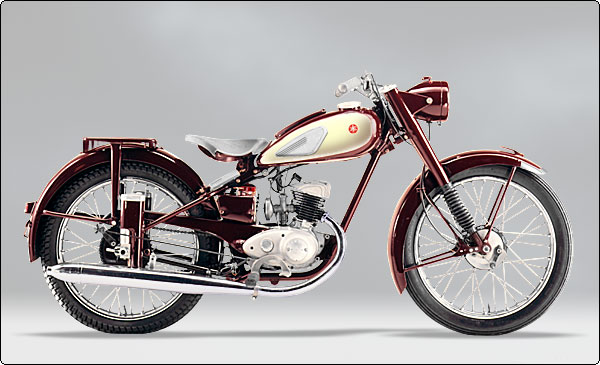 The start of the Yamaha line was this YA1, built in 1955 and known as the Red Dragonfly

This was the first Yamaha Motorcycle model ever produced. Inspired form the famous DKW RT125 and sold in Japan in its first year of production, this 125cc, single cylinder streetbike had a cantilever seat and a plunger rear suspension system and developed 5.6 HP at 5000rpm.