The AJS Model 18 500 Statesman and AJS Model 18S were both single cylinder, four-stroke 500 cc British motorcycles produced between 1960 and 1965. Claimed horsepower was 27.36 HP (20.4 KW) @ 5600 RPM. They were almost identical to the Matchless G80 and both were produced in the same Associated Motor Cycles (AMC) London factory from 1945 to 1966. These bikes represent the end of the era of big British singles, as when AMC merged with Norton production concentrated on twins.

The AJS Model 18 was developed from a design from the 1930s, despite which it was still being manufactured 30 years later. The AJS was updated when a springer frame rear suspension was made available for 1949, to become the Model 18S. The suspension was a vast improvement on the rigid rear end - which had given a bouncy ride. Each of the two 'Candlestick' shocks held only 50 cc of SAE 20 weight oil. They were prone to leaks and were replaced by the larger diameter 'Jampot' shocks on the 1951 version.

The engine was a air cooled single cylinder, four-stroke. A 86.0mm bore x 85.5mm stroke result in a displacement of just 498.0 cubic centimeters.

The bike has a 4-speed transmission. The final drive was via chain. Power was moderated via the wet multiplate. 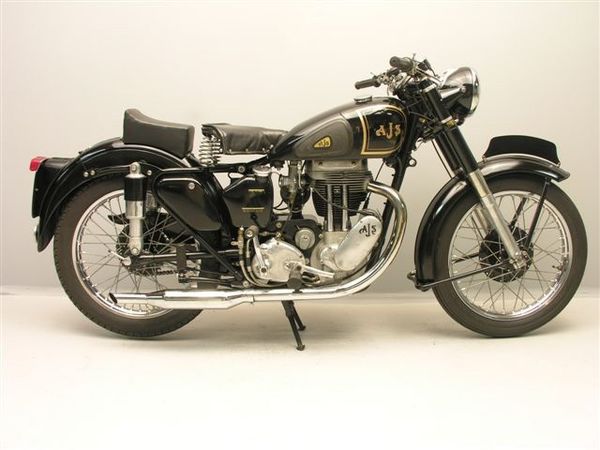 The 1945 AJS Model 18 500 has, at its heart, an air-cooled, four-stroke, 498cc, single cylinder powerhouse paired to a four-speed manual transmission, and can reach a maximum power output of 28 horsepower at 5600 rpm.

This classic two-wheeler was addressed for a wide variety of riders, and came standard with features such as laced wheels, a telescopic front fork, dual shocks as a rear suspension, a drum braking system, a two-piece, dual seat with a sprung rider seat, a 13-liter (4.2-gallon) fuel tank and a chromed exhaust system.