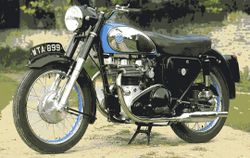 Like most AJS roadsters, the 600cc Model 30 of the late 1950s suffered from a case of dual personality. Almost exactly the same bike, differing only in paint color, badges and exhaust system, was also sold as the Matchless G11 — a result of the Wolverhampton-based AJS firm having been taken over by Matchless of London in 1931. The combined firm in turn became part of Associated Motor Cycles (AMC) in 1938, but the AJS and Matchless names were retained and used in an attempt to attract the continued support of each of the brand's enthusiasts.

AJS had originally been founded by Albert John Stevens in Wolverhampton around the turn of the century, and won the Junior TT in 1914. But AJS's greatest racing feats came later, notably when Les Graham won the first ever 500cc world championship on the Porcupine twin in 1949.

The most popular AJS racebike was the single-cylinder 350cc 7R, known as the "Boy Racer". Introduced in 1948, the 7R was hugely successful and was later enlarged to 500cc to make the Matchless G50. Most of AJS's roadsters were less spectacular singles and parallel twins such as the Model 30, whose 600cc engine had almost square dimensions, and gave a smoother ride than most other models.

Peak output was only 33bhp but the twin was capable of cruising fairly smoothly at 70mph (112kph). Handling was predictable and made for a relaxed, comfortable bike over distances. The Model 30 was also well-made, reliable and economical. Unfortunately such attributes were not enough to keep AJS in business. Poor sales led to parent company AMC becoming part of Norton Villiers in 1967. Some AJS bikes were then built incorporating Norton parts, but they were not successful and the factory ceased production shortly afterwards.

The engine was a air cooled v2, four-stroke. A 72.0mm bore x 72.8mm stroke result in a displacement of just 593.0 cubic centimeters. Fuel was supplied via a overhead valves (OHV).

The bike has a 4-speed transmission. The final drive was via chain. Power was moderated via the dry multi-plate. 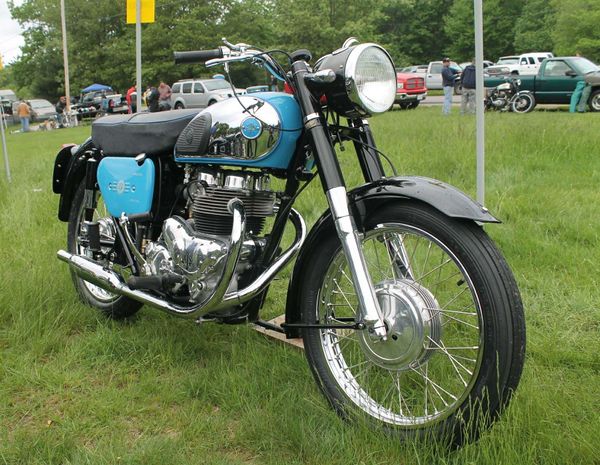 The 1956 AJS Model 30 600 is a powerful classic two-wheeler, that has been created for the adrenaline-junkies among AJS fans. It sports an air-cooled, four-stroke, 593cc, parallel twin cylinder engine mated to a four-speed manual transmission, and can produce a claimed 33 horsepower at 6800 rpm.