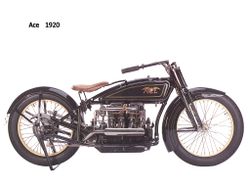 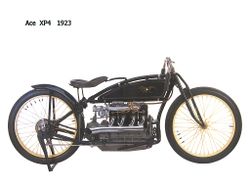 American William "Bill" Henderson set up ACE after selling Henderson to the Schwinn bicycle company in 1917, and Max Sladkin of Haverford Cycle Co. These bikes were manufactured in Philadelphia between 1920 and 1924 when the original Ace Corporation went bankrupt. In 1922, shortly after William Henderson's death in a motorcycle crash, Arthur Lemon joined Ace to take over engineering duties. Indian acquired Ace in 1926 and continued to produce designs based on Henderson's design up to the 1942 Indian Four. Ace produced bikes with an inline-four layout. The most popular was the XP-4, which set a world record of 130mph (209kph) in 1923. 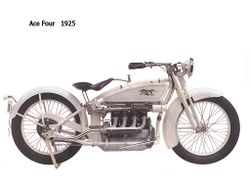