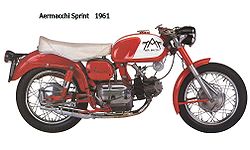 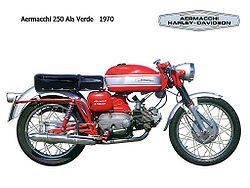 Aermacchi was run out of a former aircraft factory at Varese in northern Italy. They built many 250 and 350cc single cylinder four-strokes in the 1950s and 60s. The Ala d'Oro introduced in 1959 was quite a racebike and was capable of 100 mph. Aermacchi was bought out by AMF Harley-Davidson in the 1960s, and in the process redirected it's focus to producing two-strokes. Walter Villa rode Varese-built Harleys to four 250 and 350cc world titles between 1974 and 1976, but two years later the firm was declared bankrupt and sold to Cagiva.

The bikes produced by Aermacchi were quite successful in the postwar Italian market, also thanks to their repeated placements on the race tracks. The firm designed and produced models incorporating the Italian word "Ala" (wing) in its names, such as "Ala Verde", "Ala Blu" and "Ala d'Oro" (respectively "green wing", "blue wing" and "golden wing").

The Italian motorcycle maker was bought by Harley in 1960, and sold in 1978. Harley's reason for buying into Aermacchi was simple: by the late 1950s, it was clear the company needed to get into small motorcycles as British imports such as, the Triumphs, Nortons and BSAs and to a lesser extent the Italians, were dominating the market. Although Honda had yet to secure its 'Nicest People' revolution, small motorcycles were increasingly popular, and Harley was losing market share as a result. All it could offer was the outdated 7ci (125cc) Hummer, and the quickest solution was to buy someone else's small bikes and stick Harley-Davidson badges onto them. Aermacchi seemed like the obvious partner: it had been an aircraft manufacturer before the Second World War, but turned its attention to motorcycles in 1954. The first prototype was actually electrically-powered, but a 125cc machine, the 125N, 15ci followed. It was really a cross between a bike and a scooter, with a step-through fame (scooter-style) and motorcycle-type dummy fuel tank. Others followed, notably the futuristic looking 10.5-ci (172-cc) Chimera in the mid-50s while in competition Aermacchi secured new 50cc and 75cc speed records.

But the company was small and in a weak position, despite gradually improving sales of its 11 and 15ci (175 and 250cc) four-stroke singles, with their characteristic horizontal cylinders. This was what attracted Harley: the Aermacchi singles were modern and lightweight for their time, but the Italians needed investment to carry on making them. A deal was struck: Harley-Davidson bought the whole caboodle, and Aermacchi began exporting the singles to America, complete with Harley-Davidson badges. They were successful, and despite fierce competition from the Japanese continued to sell right into the 1970s, though were looking increasingly outdated by then, despite the later addition of electric start. But Aermacchi was not standing still, and 1967 saw the introduction of the M125 Rapido, which formed the basis of a whole new generation of two-strokes. Off-road bikes of 5 and 6ci (90 and 100cc) followed, and the much-updated TX125 trail bike in 1973. A 175 version followed then a 250, which was fast but more expensive than the opposition. In fact the pace of development was so fast that Aermacchi just could not keep up with the Japanese and sales began to drop off. In 1978, faced with its own problems at home. Harley-Davidson sold the Aermacchi concern to Cagiva, a fledgling Italian bike maker which utilized the factory to good effect. AFIL-C10