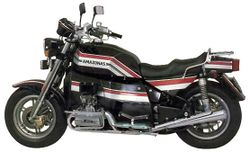 Although the entire history of Amazonas bike from Brazil began in 1978 when the first motorcycle was hand crafted, the young Guilherme Hannud Filho started his motorcycle business eight years later, in 1986. At that time he was only 31. On these circumstances he earned the title of the youngest motorcycle company owner in the world. But he didn't want to enter the Guiness Book with this record.

His dream was to make a huge great bike. The recipe called for a Volswagen engine, transmission and an Indian bike frame. For almost three years of production, till 1989, only 450 units of Amazonas machines were created, most of them for police and escort use in Brazil. As a matter of fact, these huge two wheels monsters were designed especially for Brazil, the government having a special feeling for them even if the Harley Davidson's bikes seemed a better choice. The most impressive motorcycle in the world could be found in Japan, Europe and USA too.