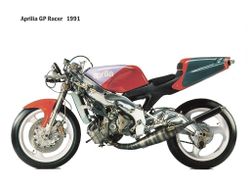 Aprilia is an Italian motorcycle company, one of the seven marques owned by Piaggio, the world's fourth largest motorcycle manufacturer.

Aprilia was founded by Cavaliere Alberto Beggio. It was originally a bicycle production factory at Noale, Italy. In 1968, Alberto’s son, Ivano Beggio took over the leadership of the company. The first Aprilia motorcycles were made by hand. The first production Aprilia mopeds were named Colibrì, Daniela and Packi. The early Aprilia models were more of a scooter/moped design. More recently Aprilia has come to be known for its race-winning sportbikes. It is most recently best known for its flagship 1000 cc V-twin Superbike, the RSV Mille.

Aprilia has become one of the world's major motorcycle manufacturers in recent years. In 1973 Ivano Beggio took control of the family bicycle firm and moved it into the motorcycle business. Aprilia has traditionally held a policy of manufacturing nearly none of it's components in-house. Also, unusual is that over a quarter of a Aprilia's workforce of 500 is intimately involved in racing, or R & D. Aprilia bikes often use Suzuki motors, such as the RS250 which uses a motor from the Suzuki RGV250.