A motorcycle that provides a good mix of acceptable performance on both bush trails and tarmac makes for a versatile adventure machine. Motorcycles that offer these benefits can be split in two camps.

Bikes such as the DR650 Suzuki, F650 BMW, XR650L Honda and KLR 650 Kawasaki have large single cylinder engines and are the 'relative' lightweights. While multi-cylinder machines such as Triumph's Tiger, Cagiva's Navigator, BMW's R1150GS and Suzuki's V-Strom are members of the heavyweight class.

Aprilia offers machines in both those categories; the ETV 1000 Caponord uses a 998cc V-Twin engine and is the bigger machine. While at the lighter end of the scales is the Pegaso 650 model, which I sampled during a recent trip to New South Wales.

The Pegaso's 652cc powerplant is liquid-cooled and features double overhead camshafts operating on five radial valves. Aprilia claim 47hp from the big single. In the real world this translates to around 35hp at the rear wheel. All machines in this class are fairly equal in performance at around that mark, 35hp at the wheel, no matter what the makers claim.

The test machine had a nice set of Staintune mufflers fitted but still seemed top get a bit breathless at higher revs.

One feature that the Aprilia does have over the competition is a large 21-litre fuel capacity which provides for a genuine 300km tank range if riding conservatively. A sophisticated twin-injector EFI and engine management system ensures the right amount of fuel and air is provided to the engine.

Five gears are available and the box makes for reasonable shifting. It is maybe a little agricultural in operation but works well enough and missed shifts are a rare occurrence. Around 120kph is about the maximum cruising speed that remains manageable, above that the vibrations and fuel economy take a dive for the worse.

The engine does have a balancer shaft, but, like all big singles, it does vibrate more than would be preferable. Luckily the rider is isolated from most of this with no annoying oscillations coming through the bars or pegs. Unfortunately the same can't be said of the seat. This is one area of rider comfort that could be improved, but again, most of the opposition suffers the same foible. But the Pegaso is at the worse end of that scale.

45mm Marzocchi forks handle the bumps and do a fairly good job of keeping the front end planted in the gravel but unfortunately are non-adjustable. A Sachs shock controls the rear and is adjustable for both preload and rebound. The suspension is a good compromise between road and trail, without being singularly exceptional in one of those areas. Aprilia claim a dry weight of 161kg. High speed stability on rough trails is very good.

Over 200mm of ground clearance is available. However, the foot-pegs are situated quite low, which means that spirited riding on tight roads can see the pegs touch down quite early. But the positive trade-off is excellent legroom for the taller rider. A reasonable 817mm seat height is just manageable to those who are a bit shorter than average.

Braking performance is quite strong with a 300mm single disc up front squeezed by a twin-piston Brembo caliper. A little more feel and hydraulic assistance would be welcome. The rear disc is extremely strong, and requires a careful toe in slippery conditions.

Very clear instruments display speed and revs in the conventional round-face style. Also fitted is a temperature gauge, not a temp' light but a proper gauge ranging from 40-120°. It is surprising that more adventure machines do not have such a clear temperature gauge, it does help to reassure the rider that things are mechanically okay when in the bush.

Alternatively it can give a rider enough notice that something is wrong in order for them to save the engine, or instead complete a journey in small hops while keeping an eye on the temperature. Good thinking.

Warning lights are also provided for fuel, which illuminates when there are around 4.5 Liters remaining in the tank, an EFI fault light, oil pressure light and high beam. Many machines in this class do not even offer an oil pressure light, which always makes me nervous as the rider gets no warning that mechanical problems are developing. A turn signal and neutral light are also provided, all up it would be safe to say that the Aprilia offers the best instrumentation in this class.

The small screen is surprisingly effective, of course it does not stop all the wind blast but it does protect the rider from some buffeting and rain spray.

Aprilia list the basic Pegaso at $12,496 + on road costs, or $13,420 with side panniers and tankbag. Comparable with BMW's heavier F650 but much more expensive than the KLR 650 Kawasaki or Suzuki's much lighter DR650 and Honda's XR650L. But the Aprilia is worth a look if considering a single-cylinder adventure machine. 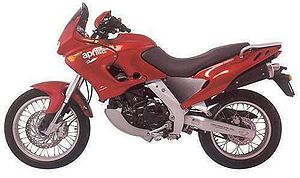 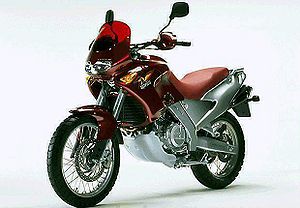 The 2003 MY Aprilia Pegaso 650ie sports a liquid-cooled, four-stroke, 652cc, single cylinder powerplant paired to a five-speed manual transmission and can produce 50 horsepower and 59 Nm of torque. This machine is a lightweight one capable of tackling both paved and unpaver roads, thanks to its high-end suspension package. It is suitable for the more adventurous among Aprilia fans, and boasts standard features such as laced wheels, a large front disc brake, a 45mm upside-down telescopic fork, a rear Sachs adjustable monoshock with APS and tips the scale at just 160 kg.

The 2005 MY Aprilia Pegaso 650ie is an adventure machine suitable for those riders who prefer agility and maneuverability over brute strength. It sports a liquid-cooled, four-stroke, 652cc, single cylinder powerplant mated to a five-speed manual transmission, and can reach a maximum power output of 50 horsepower and 59 Nm of torque. 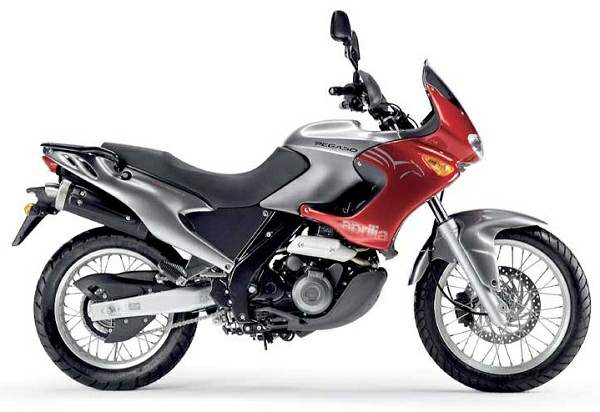 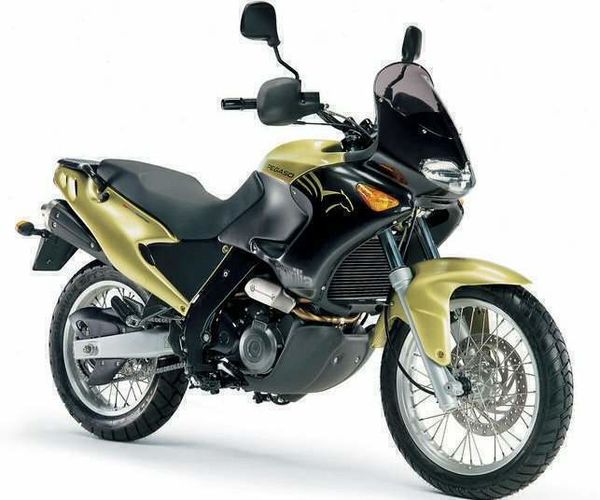 The 2006 MY Aprilia Pegaso 650ie has, at its heart, a liquid-cooled, four-stroke, 652cc, single cylinder powerplant paired to a five-speed manual transmission and can produce a claimed 50 horsepower and 59 Nm of torque.