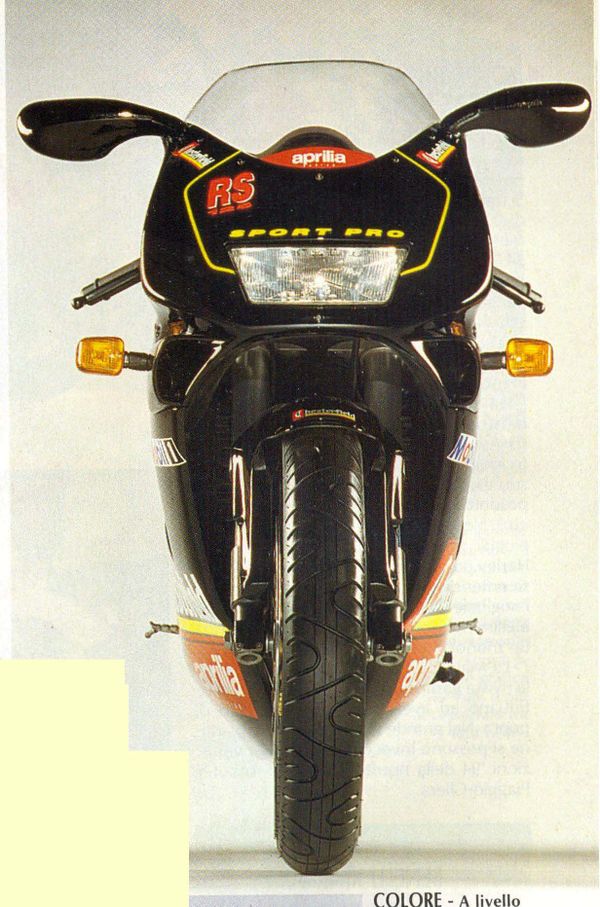 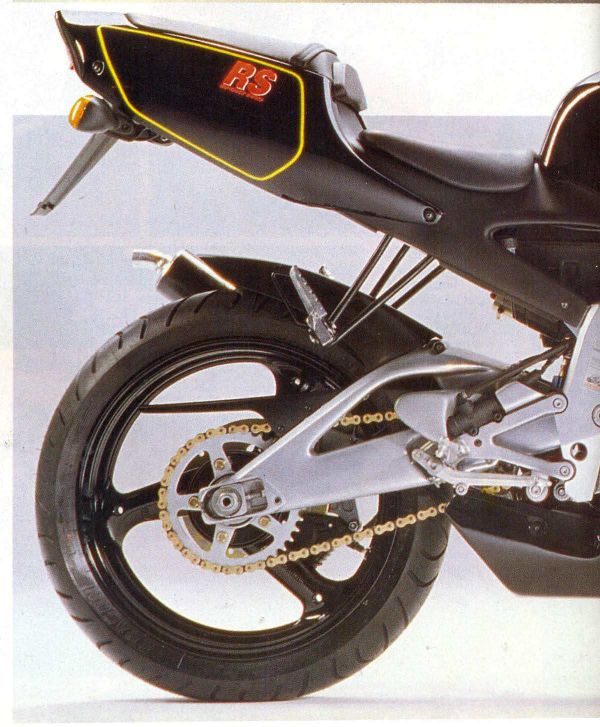 Like the firm's RS50, the RS125 has a very high level of equipment, performance and styling for its class. An aluminum alloy perimeter beam frame holds an advanced liquid-cooled two-stroke engine. The 125cc single-cylinder motor uses a ceramic-type coating on the cylinder to cut friction and wear, while modern intake and exhaust designs boost power to over 194kW (260bhp)/litre.

The aerodynamic fairing echoes the designs of Apt-ilia's GP machinery, and there have been various race-replica paint schemes. The RS125 has a high-specification chassis design, with wide, sporty tires, 40mm (0.8in) upside-down front forks and an aluminum swingarm with adjustable monoshock rear suspension, giving fine handling especially on the track.

As we saw in the 90s with AF1 AF1 Futura Summary Sport and '90, '92 sees the coexistence of two different models in two series: first the Futura AF1 Sport Pro and other new series RS Extrema Autumn '92 also available in new color replica Reggiani. However, unlike the '90s when both the Sports Summary and future are presented in time to take part in the Sport Production championship, for the '92 season, only the Futura Pro Sports is submitted in time to be entered in the league. So while the future Pro Sport is marketed primarily to be sold to those who run sports league in production, the RS Extrema lives its first year of life only as a street bike.

The Extreme is essentially a new bike to the future and an exciting new addition to "dress" features a new fairing and a beautiful, flowing tail, the most important changes are a brand new chassis - in aluminum - designed from scratch and to mark the sign of discontinuity with the AF1 series, a new aluminum swingarm with two arms instead of the single-arm steel previously used. Unfortunately, the quality of the Extrema is lower than the previous Futura in some detail how the rider and passenger footrests, but the quality of assembly and painting is still better.

The Extrema remains in production until the end of '94 and is flanked by two versions produced in Sport Production in '93 and coloration Reggiani Replica Replica Chesterfield in '94. RS125 HISTORY Racing improves the breed. Aprilia cut its teeth in the world's two stroke championships, so the public had the race team's R&D department behind them.

The Italians have always been good at making small capacity bikes. As far back as 1949, Mondial, Morini and MV Agusta dominated the championships. By 1998, new boys Aprilia had made their mark, first with the elbow-scraping Loris Reggiani in the 250cc class, then a year later with Fausto Gresini in 125cc class. It was at around this time the Noale, based factory launched the road legal AF-1 Sintesi, abike that most seventeen year old boys would have given their right arm to own. And for most lads of that age, that 's a huge sacrifice...

The AF- 1 was leagues ahead of anything of its time. It had a single-sided swinging arm for chrissakes, it was beautiful. The bike went through a fairly gentle evolution with first the AF- 1 Replica, then the AF-1 Futura before the RS was born in the guise of the RS125 Sportpro in 1993. followed by the RS125 Extrema. Along the way, many top GP riders made their names with the factory, giving birth to some stunning RS replicas: The likes of Valentino Rossi, Loris Capirossi, Max Biaggi, Marco Melandri and Harada all, having had bikes built in their honour,

Just seven years ago Casey Stoner took the 2000 Aprilia RS125 Superteens Championship, a series that still runs today in the UK. So, not only is the RS125 a dreams. We got our hands on a 2004 Manuel Poggiali Rep (2003-250GP Champion) and a brand spanking Jorge Lorenzo Rep (2006, 2007, 250GP Champion) to find out for ourselves just how good the kids have got it these days.

The simple fact that both of these bikes are in replica color instantly knocks year off you. You see, I couldn't afford to own one of these little beauties in my teens so I had to make the occasional ten-minute blast on my wealthier mate's Futura. Despite the fact that these days I get paid to ride just about every modern sports bike (lucky bastard, I know). I've to come clean and tell you that I'm really very, very excited about having not one, but two 'full power' RS125s to myself for more than 10 minutes.

Jorge v/s Manuel The ride up from DK's Newcastle under Lyme showroom up into the Peak District National Park is hilarious. Absolutely wringing the life out of old Manuel (the '04 Poggiali replica) in a bid to keep up with young Jorge harder than he's ever been ridden before, is the most fun I've had on two wheels in months. The fast, winding roads up towards Buxton provide the perfect playground for these two bikes as we race towards as imaginary finish line, motor screaming, slipstreaming on the straights and double daring each other stay off the brakes through the turns.

Power to weight ratio For a while I'm convinced that the new RS125 has a lighter weight and smaller frame is aiding both horsepower and aerodynamics as Jorge clears off from the lights and steals yards out of the corners on Manuel.

An RS125 in bits isn't going to get you into a girl pants, so do your research before blowing your young life's savings. Fools rush in, so tread carefully in this highly populated minefield

In a world increasingly concerned about greenhouse gases. fuel economy and other such nonsense, the thought of owning and running a two-stroke is to many people, about as appealing as stripping off, covering themselves in jam and taking a baseball bat to the nearest wasp's nest. Some might even say that the noise wouldn't be too dissimilar and that there's every bit as much chance of getting badly stung.

But, if you were born in a time before the ice caps started to melt, and started riding before all the rainforests were chopped down, then you'll know just how satisfying a two-stroke is to ride and more importantly, how simple it is to work on. There's a lot less to go wrong with a two stroke and despite a reputation for fragility and unreliability owning and running a stroker can often be one of the most rewarding times in a biker's life.

The RS125 is actually a pretty reliable bike but it doesn't take a genius to work out that most will have been preowned by seventeen year olds, so you can expect neglect and bodged repairs. Here's what to took out for,

Engine and gearbox The simple fact is that two-stroke motors need to be cared for. The longevity of the RS125 engine is heavily dependant on using the right grade of oil. Fully synthetic is the only choice, with Motul 800 Factory Line being a popular choice amongst Aprilla dealers. Most of the problems associated with the RS can be avoided by following the correct service schedules, though unsurprisingly, this isn't something that most teenage owners are any good at. The piston and rings will need to be inspected at 5,000 miles and pistons should be considered a disposable service item Genuine Aprilia pistons can be pricey, but aftermarket ones are readily available and don't give any known problems. Engine seizures are rare with the RS, thanks to a reliable oil pump and qood carburation as standard. The biggest known fault with the RS motor is weak main bearings - any hint of bottom end noise should mean you walk away. The latest model is very expensive to upgrade to full power from learner legal. Our advice is to not bother - just trade it in for a full power version.

Now the confusion is around 1998 (the swop over year) you can not always rely on the date of registration as the bike may have been made in 1996 but not registered until 1998 and thus has the 123 type engine fitted. Source