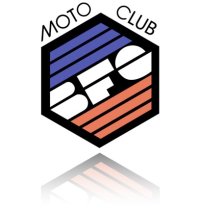 BFG is the abbreviation from Louis Boccardo, Dominique Favarios and Therry Grange who made a concept for a motorcycle late in 1977. The strange thing in this story was that the bike had a car engine. Three years later, the first motorcycles were built and sold, the French Police being interested in hundreds of bikes.

Seven years after the BFG company had designed that interesting concept and after four hundred bikes had been built, the financial problems were on the top of the list. On this situation, MBK bought BFG company and built more than 150 bikes. From the very beginning, the bike was considered revolutionary and for that idea, the three Mohicans who managed to put a car engine into a motorcycle frame were set to manufacture 450 machines with GS Citroen engines. It was a G13/646 type, 1299cc engine, with 4 horizontally opposed air cooled cylinders, able to develop a power of 70bhp at 5500rpm and a torque of 100 Nm at 3250rpm. The bike could reach a top speed of 190 km/h.

Being considered an important accomplishment of the French technology, the president Francois Mitterand offered Juan Carlos, the king of Spain, a BFG, in 1982.

Unfortunately, some financial problems were the reason for the production cease in 1988. Even if he failed, Boccardo did not give up. He designed another bike, called MF, with the heart of a Citroen LN. It seemed that the stars were against him, because this project failed again.He kept on dreaming and manufactured four motorcycles with AX Citroen engine. Because his aim was to create a Diesel Motorcycle, he designed a frame and inserted the diesel Peugeot engine from the AX Citroen. This prototype motorcycle was number "0".