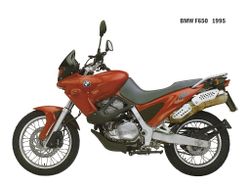 The 2000 MY BMW F650 is one of the most versatile machines designed by the House of Munich, being capable of assuming the roles of an everyday commuter, a weekend leisure bike and even a off-roader. At its heart lies a liquid-cooled, four-stroke, 642cc, single cylinder engine mated to a five-speed manual transmission, and can produce 48 horsepower and 57 Nm of torque.

Standard features such as the Telelever front suspension, the Paralever rear suspension, the saddlebag mounting brackets, center stand, as well as the three-position adjustable seat height and the adjustable front brake lever ensure the versatility of this machine, making a favorite among Beemer fans worldwide.

The 2001 MY BMW F650 sports an liquid-cooled, four-stroke, 652cc, single cylinder engine mated to a five-speed manual transmission, and can produce 50 horsepower and 60 nm of torque. It comes standard with features such as the single-wall stainless steel exhaust pipes and lace-spoked wheels. The suspension system, composed of a 41mm telescopic fork and a pre-load adjustable monoshock rear, ensures a plush and agile ride, whether on a paved road or a off-road track.

Optional features such as the ABS-N, hand protectors and heated grips, not only make for a safer ride, but a more comfortable one, as well.

The 2002 MY BMW F 650 GS Dakar boasts a maximum power output of 50 horsepower and 60 Nm of torque from its liquid-cooled, fuel-injected, 652cc, single cylinder powerhouse paired to a five-speed manual transmission. It also comes with a special, race-inspired, paint scheme, laced wheels with off-road tires, a 41mm telescopic fork with a stabilizer bridge, a continuously adjustable mono-shock in the rear, front and rear disc brakes, a dual seat, a windscreen, a rear luggage rack and an under-belly to under-seat exhaust system.

The 2002 MY BMW F 650 GS has, at its heart, a liquid-cooled, fuel-injected, four-stroke, 652cc, single cylinder engine mated to a five-speed manual transmission, that produces a claimed 50 horsepower and 60 Nm of torque.

This adventure machine can tackle both paved and unpaved roads, and comes with features such as laced wheels, road-ready tires, an under-belly to under-seat exhaust system, a dual seat, a rear luggage rack, a small windscreen, lightweight, aluminum-alloy wheels and a suspension package composed of a 41mm telescopic front fork and an adjustable mono-shock in the rear with a progressive system.