Power was moderated via the Multiple-disc clutch in oil bath, mechanically operated. 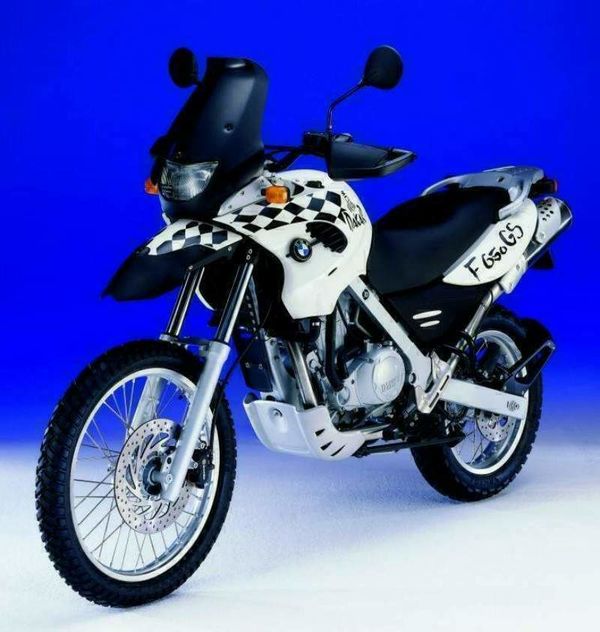 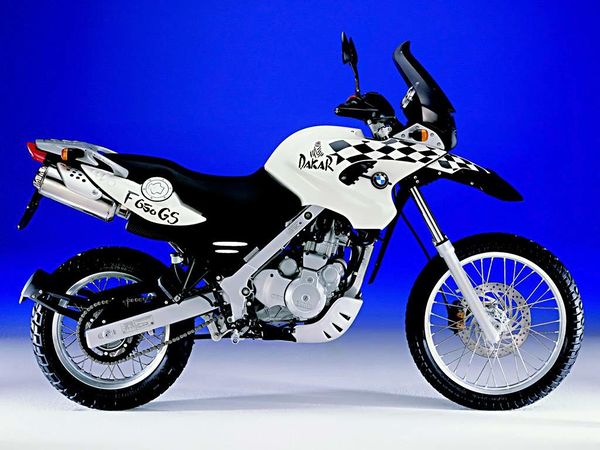 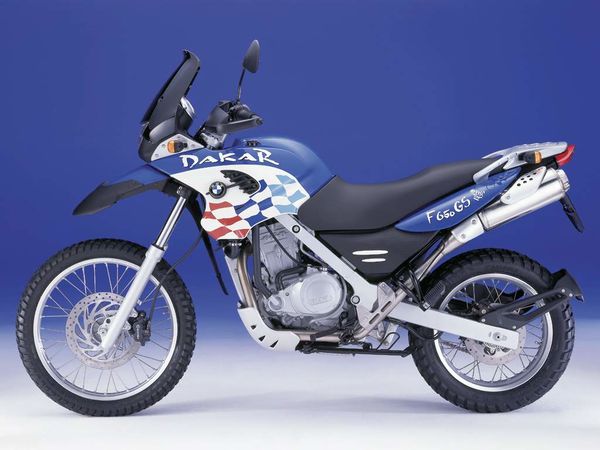 OK so it is really a dirt bike. It is very tall, has miles of suspension and runs on chunky nobblies. The very name "Dakar" conjures up images of huge central European motocrossers storming across miles of unforgiving desert tracks. You might be forgiven for thinking it would therefore be a pretty compromised road bike. You'd be wrong. Very wrong. The BMW F650 Dakar is one of the most versatile and competent road bikes it has been my pleasure to take anywhere. It makes a fantastic town bike as you would expect, our limited off road test (we like to give our test bikes back in one piece!) confirmed its usability off road but incredibly, it would chug along quite nicely for mile after mile of motorway too. All this and BMW reliability, BMW engineering and of course, the BMW badge.

I must admit, I was pretty apprehensive before picking up this bike. Drop off a full house BMW touring bike and bring back the Dakar down the same 200 odd miles of the M1. Oh dear. What chance would this offroader stand with my first impressions blighted so severely, or so I thought. The first thing you notice as you swing your leg over 34" of seat is the five inches of free space this leaves between your feet and the ground, that is of course if you only have 29" of leg to swing. This fairly fundamental mismatch is far less of a problem than less vertically challenged bikers might think. Most tall bikes are crossers or supermoto and therefore pretty lightweight, a slight angle and there's not so much tippy toeing. I have never been one to paddle a bike around anyway and once you get your feet up this bike balances beautifully. This particular bike was fitted with a Laser end can and started up with a startling bark. Nice. Almost un-BMW-like but perfectly appropriate for such an aggressively styled machine. The throttle doubles as a volume control (!) and you can pretty much choose how much noise you make by being more or less violent with it. Immediately on pulling away you are struck by how balanced the bike is and how much control this gives you. Good job too because the first thing I did on this bike before joining the motorway was to test the handling on a lovely long lefthander. Oops. The corner appears to tighten up as I drift wide with that sinking feeling. But there's no fuss, no drama and the balance helps what might have been a long graceful oversteer into the bushes is a gentle reminder that only half of the rubber on this tire is actually reaching the road. The chunky enduro nobblies seem to walk across the tarmac but they don't really let go and you soon get used to the slightly wider line. And so onto the motorway. I do like big singles and I am a confirmed short shifter by nature but in the interests of science, thrash this bike up through the box. The exhaust note changes from a deep visceral bark to a machine gun staccato and the engine spins up without complaint or, thankfully any nasty vibration. No great surprises from the Rotax waterboiler in the power department and no great alacrity in the resulting velocity curve but a very pleasant surprise with the respectable pace at which this machine will comfortably cruise.Having been worried I would be spoiled by the immediate experience of the BMW1150RS I had just dropped off, I find I am actually much happier cruising on this machine at the same, if not slightly higher speed. Bizarre. More to do with the speeds you can get away with in the UK than any criticism of the bigger Boxer engined machine. A "barely legal" (that will keep our search engine busy!) cruising speed on the Dakar is more comfortable (and more fun) than it's bigger brother. The tall fly screen works particularly well at keeping the windblast at bay while the engine just feels indestructible without any intrusive vibration. A slight weave sets in at 90 plus, as you would expect given the aerodynamics of such a bike but things never get out of hand. Two hundred miles later and I could turn around and do it again. No numb bum, no vibration whitefinger and no complaints. It is only when I start wheeling the bike into the garage I begin to notice the size and weight of this machine. For a single cylinder four stroke, albseit watercooled and all that, it is a heavy bike tipping the scales at 192kgs. The figures don't lie but it is just a number and in motion the bike carries this weight well. Fuel is carried low under the seat and the designers must have got something right with the geometry because, well, it just doesn't feel heavy at all.Looking around the bike, you are struck by the attention to detail and the build quality of the cycle parts. You have to look pretty close though, in the same way that "money talks, wealth whispers", the BMW doesn't shout at you with garish acronyms and loud logos. It is the simplicity and elegance of construction that almost hides itself but let's not forget, this bike is designed for reliability and durability. The simpler the better. Controls, often a moot point with BMW bikes generally are pretty good on this example. You get heated grips as standard and if you've never experienced this on a bike, you are missing out big time. The warmth is welcome on all but the sunniest of days, especially in the UK and creates a whole new relationship with the bike. We digress. Rear suspension is adjustable for preload from a chunky dial on the right hand side of the bike and also for damping on the shock body. Cranking up preload makes wheelies a doddle but the softer setting makes for a much more comfortable ride. And the ride is comfortable. One of the advantages of a higher sprung weight is the ability to soak up bumps without upsetting the rider. No bumpy, flighty supermoto tendencies here, my only criticism of the comfort was that I couldn't share it with a passenger. Our bike came with a single seat and hard plastic compartment cover although the rear footrests were still fitted. I can't really see the point of the single seat option and I would have to worry about landing on the solid cover in the event of a forced landing. Right on the coccyx. The Dakar makes an excellent town bike, especially given the bumpy roads around London.

Dirt bikes are the two wheeled equivalent of the ubiquitous SUV (Sport Utility Vehicles aka shopping trucks) and you get the same high and mighty feeling when riding such a tough looking machine as this. The Dakar is in it's element dicing around town, strafing errant motorists with a loud crack from the exhaust. This bike encourages hooligan behaviour which contrasts wickedly with the erstwhile sensibility of the BMW moniker. I find myself jumping speed bumps and deliberately aiming at potholes, just because I can. The Dakar will soak up just about anything you can throw at it. Given BMW's excellent record in winning the gruelling and highly competitive Paris-Dakar on bikes like this, it is almost heresy to suggest that the F650 Dakar is the perfect commuter. But it is, so shoot me. There is also a whole host of optional accessory luggage and given the way this bike shrugs off its weight, I would expect a fully loaded bike to behave with the same delicate balance and sure footed agility.The Dakar differs from it's closest relative, the unfortunately titled "Funduro" not only with it's striking "Desert Blue" paint job but an extra couple of inches of suspension travel at either end and larger diameter 21" front wheel. ABS is not an option on the Dakar (unlike the Funduro) but then I am personally not a fan of ABS on bikes, especially on bumpy town roads or in heavy traffic, so no complaints here. For those of you who haven't experienced ABS it feels like the bike shoots forwards just when you really want it to stop. Heart stopping when it kicks in. The science is sound and there are figures to prove ABS will stop you quicker but I'd rather feel the tire begin to slip rather than the brakes begin to go away... So who should consider a bike like this? Well frankly, who shouldn't? The Dakar does pretty much everything; on-road, off-road and everything in between. I must admit I really missed the Dakar when I had to hand it back to BMW. More so than any other bike I have been fortunate enough to test. It was just so easy to live with. Reliable, comfortable, practical and the ideal vehicle for weekend outdoor adventure and day to day traffic dodging. Sure there are better enduro bikes but they are usually compromised for serious road use. What about the current surge in Super Moto machinery? Well the best of those are really competition bikes, hilarious for short trips but tiring on longer journeys. You'd need a road bike too or a good proctologist. The closest all rounder in this category has to be the Funduro of course but "Funduro"? Oh dear. Great bike I'll bet but wouldn't you rather have a Dakar in your stable? I would. In fact one of these days I rather hope I will.