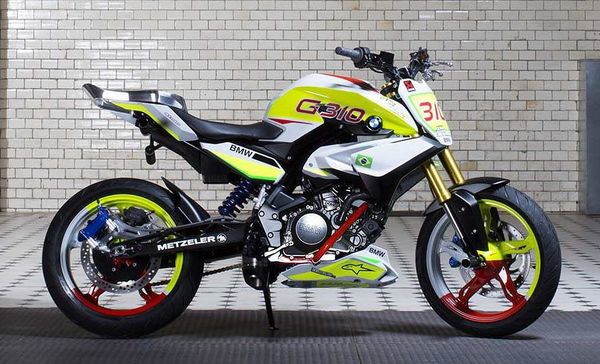 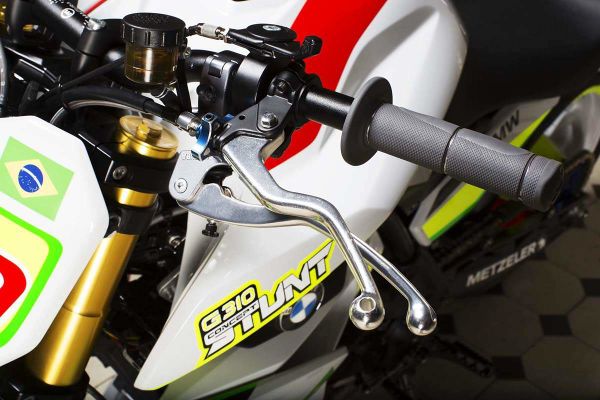 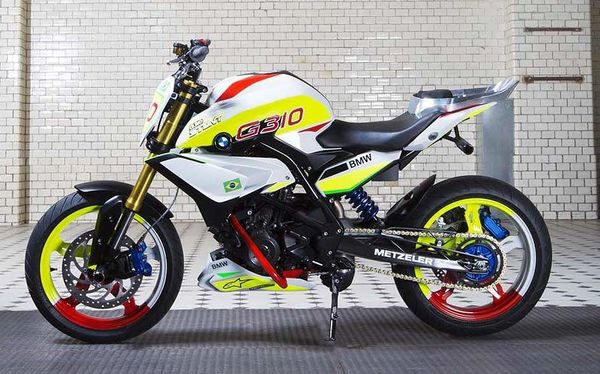 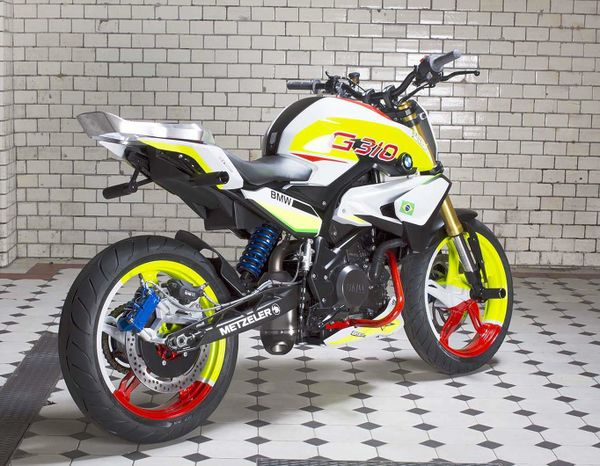 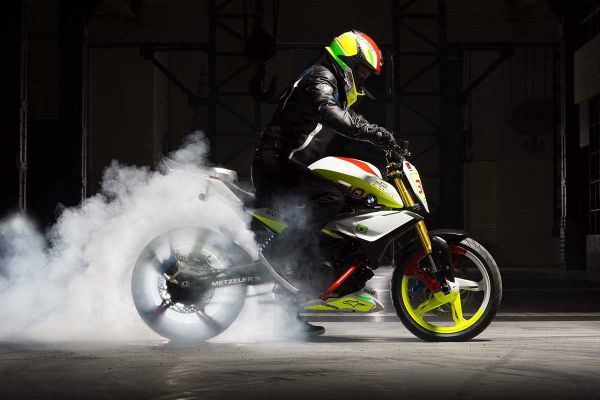 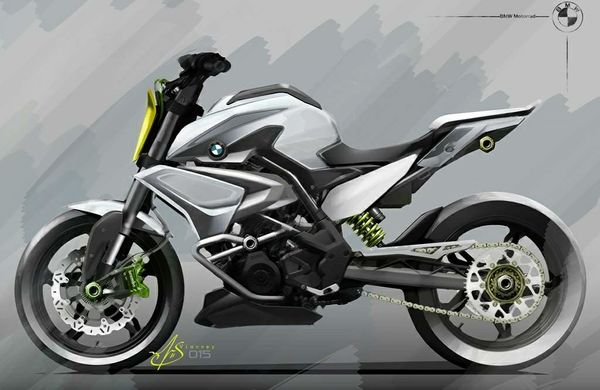 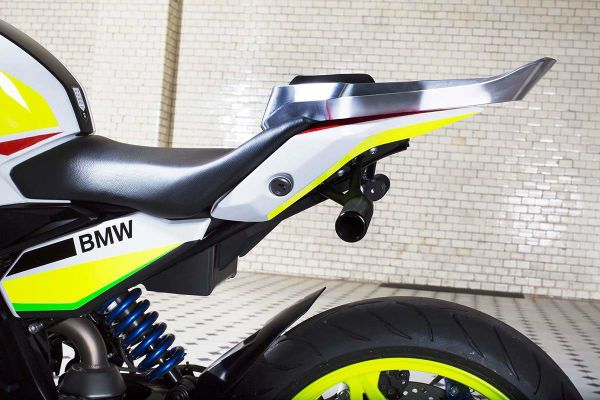 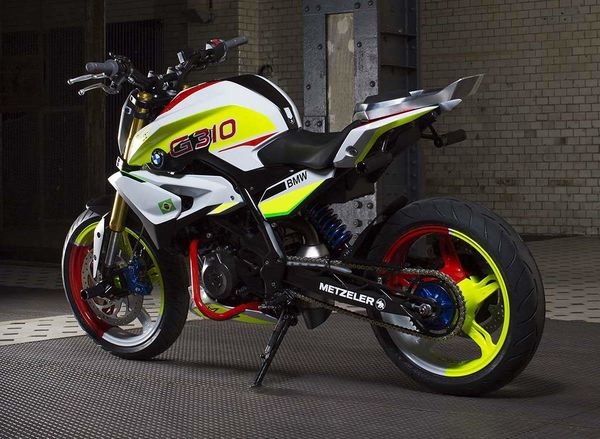 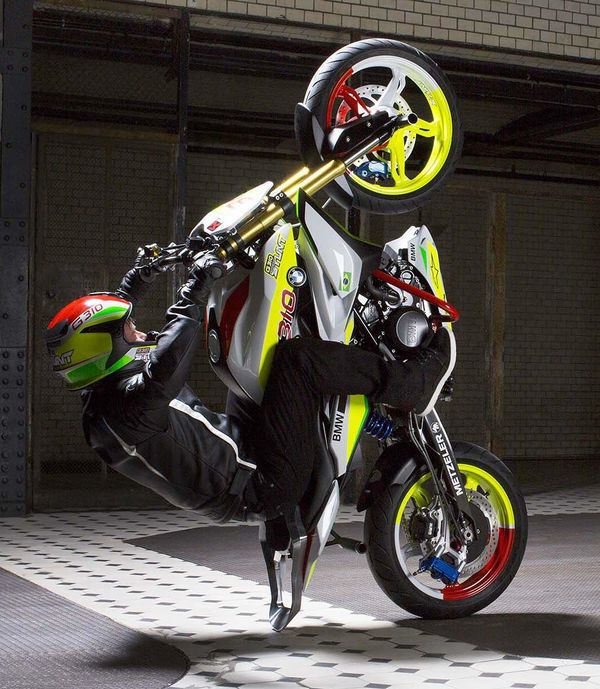 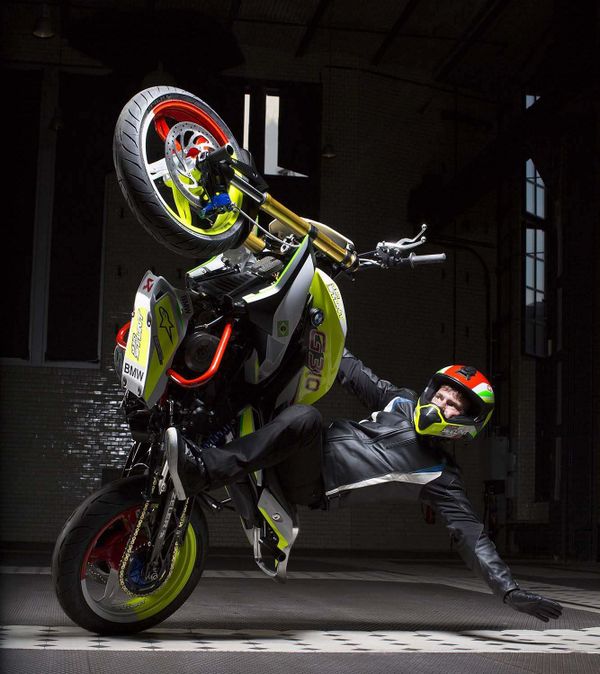 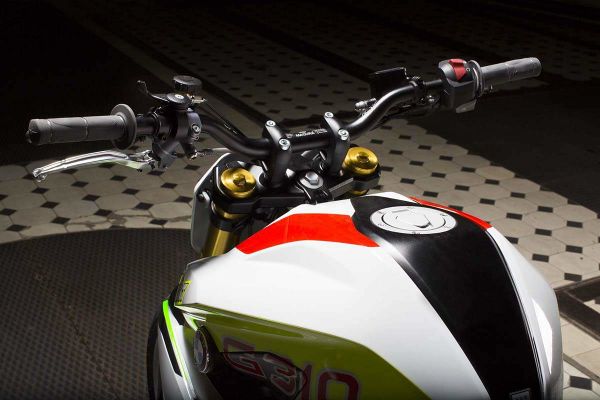 Munich/São Paulo. With the world premiere of the BMW Concept Stunt G 310 at South Americas largest motorcycle show, BMW Motorrad is presenting a completely new side: the uncompromising interpretation of an aggressive and agile stunt bike based on a single cylinder study.Thanks to his experience as a four-times World and European stunt riding champion, Chris Pfeiffer, contributed to the realisation of the BMW Concept Stunt 310. Stunt riding is a demanding and multi-faceted sport. Ideally you need a compact, agile bike which is also stable and robust at the same time. You have to achieve the ideal balance between aggressiveness and control, explains Chris Pfeiffer. Compact proportions, highest-level agility. The BMW Concept Stunt G 310 combines all these qualities and makes clear at first sight: the newly developed 1-cylinder engine allows for very compact proportions thanks to its innovative concept. The special feature is the cylinder which is inclined towards the rear and the cylinder head which is rotated by 180 degrees. This permits optimum placement of the engine in the motorcycle and a short wheelbase in spite of the long swinging arm thereby making the motorcycle very agile. The low-slung front and the raised tail section promise fast and nimble changes of direction as well as dynamic riding. By shifting the intake area towards the front while also moving the exhaust system towards the rear it was possible to place the rear silencer in an upright standing position underneath the seat between engine and spring strut. In this way the silencer is optimally protected and does not limit the stunt riders freedom of movement. Even though you may hardly see it, you will not overhear it. Once started, the sound of the BMW Concept Stunt G 310 is sure to attract attention.

Emotional surface design in typical BMW Motorrad style. The emotional side view of the Concept Bike is characterised by the powerful three-dimensional design of its surfaces. The precise lines and the expressive interplay of the contours create a sense of movement and speed even when the bike is stationary. What is especially striking in this respect are the side wing contours of the fuel tank which significantly emphasise this effect. All lines seem to generate a sense of movement towards the front wheel and underline the playful ease of handling of the BMW Concept Stunt G 310. Simultaneously the bikes surfaces create a compact and distinctive silhouette emphasising the favourable centering of masses around the engine block.

The slim front view of the BMW Concept Stunt G 310 also draws attention to its high level of agility. The expressively modelled surfaces of the fuel tank result in a broad shoulder section which is underscored further by the design of the front facia. Similar to its front, the raised, filigree tail promises playful cornering and handling. It shifts the visual centre of gravity to the front even further and in combination with the engine spoiler emphasises the front wheel even more.

Extensive stunt modifications. The numerous modifications are typical for a stunt bike; in making them Chris Pfeiffer brought his many years of experience as a stunt professional to bear in cooperation with the BMW Motorrad Design Team. Their single aim is to provide the best possible handling properties for the stunt riders feats on the asphalt. The lockable throttle ensures constant propulsion even when the riders hand has to let go of the throttle grip. In addition a slightly altered gear ratio secures greater propulsive force to the rear wheels at low engine speeds while the intentionally oversized rear wheel brake ensures reliable deceleration in every situation. A second, even larger rear wheel brake allows the rider to brake the rear wheel using only his middle finger, in case his right foot is not on the footrest in certain stunts. The additional brake lever is specially placed on the left side of the handlebars and can even be operated at the same time as the clutch. So-called axle pegs on the front axle and in the seat area give the rider additional options for placing his feet which go way beyond the possibilities offered by normal foot rests. The distinctive red crash bars provide additional protection for the engine. A special highlight on the BMW Concept Stunt G 310 is the stunt tail which was specifically developed by BMW Motorrad and which has not been seen in this shape on a stunt bike. It is milled from solid aluminum and features an opening in the centre, which offers the stunt rider a hold for his foot. Together with the non-slip seat, the aluminum component also ensures a stable seating position when riding thanks to its shape.

Modern color and material design. The color concept features the classic BMW motorsport color white as the base color as well as red and blue in combination with the national colors of the Brazilian flag in a modern interpretation. The spectacular neon green and yellow color and material design is certain to attract attention. The bright neon colors extend along the entire body thereby emphasising the dynamic lines and surfaces of the bike. The core of the bike, the drivetrain, features darker colors and moves the visual centre of gravity even lower. Edgar Heinrich, Head of BMW Motorrad Design sums up: The BMW Concept Stunt G 310 is a real eye-catcher. Everything on this concept seems to be shouting out to ride it and defy the laws of gravity.

Interview with the Senior Advanced Designer, Alexander Buckan The passionate process of design, with Alexander Buckan The new BMW Concept Stunt G 310 looks like a fantastic bike to ride, which usually means that those involved with the design have had a lot of fun in the creative process from conception to delivery. To tell us more about this enjoyable journey is senior advanced designer Alexander Buckan. How many people in the team worked on this design study? Well, BMW design projects are usually a team effort and in the case of the G 310 this was no exception and the following were responsible: Ola Stenegard, Volker Hohdorf, Vianney Selosse, Bianca-Maria Hoffmann and myself, along with the entire BMW Motorrad Design Team under Edgar Heinrich. So what role did you play? I was the responsible senior advanced designer for the bike. Its hard to clarify the role exactly  you could call it a kind of design grandfather spiced up with a bit of experience  but its a part-management role, to make sure that everybody does what I want, ha ha! Seriously though, Im in charge of managing the designers and acting as a kind of link between the workshop, the designers and the marketing guys! How difficult was it to achieve the aggressive, yet agile design language necessary for a stunt bike? I wouldn´t say how difficult was it, because it was simply a gigantic pleasure to develop this kind of bike, for all of us! How often do you get the chance to do something cool like this  to chop bits off? Usually, with series production bikes we have to add and cover up additional things! Who came up with the idea of the stunt tail and how well does this feature work? I guess the idea was born when the designers and Chris Pfeiffer sat down together. Usually, stunt riders just take a bent tube, but now with our milled aluminum stunt tail, the opening in the centre was designed to fit perfectly to the shape of Chris´s foot, so the whole arrangement is perfectly aligned according to Chris´s proportions  a bit like a made-to-measure suit. So, precision and emotion is our BMW claim  and this special tail is part of that precision  we are always trying to do a bit more than the others! What was Chris Pfeiffers input in this project? We called Chris Pfeiffer to convince him to support us, and right from the beginning he was involved with deep passion. So he came to Munich and we discussed the project and threw ideas back and forth until, finally, we came to the conclusion it would make more sense to lock them (Vianney, Chris and the bike) in a room together and let them fight it out! So after a couple of months this stunt-beauty was born.

And the special stunt modifications? We did numerous stunt modifications, together with Chris´s expertise. Our single focus was to provide the best possible handling properties to the rider. We put the silencer in an upright position between the engine and the damper, it is ideally protected and doesnt limit the stunt rider´s movement in any way. It sounds good too: even though you might not see it, you´ll surely hear it  its diabolic, rad, crying like there is no tomorrow! We added a lockable throttle to ensure constant speed, even though the riders hand is not on the throttle! We put on a larger, second brake at the rear, which allows the rider to activate braking on the rear wheel by using the middle finger of the left hand. It can even be operated at the same time as the clutch. Add to that foot pegs on the front axle and in the seat area, and the red crash bar, and youve got a lot going on! What elements of the finished bike are you most pleased with? Nothing! That might sound surprising but it´s perhaps in the nature of things in the design world to always be unsatisfied. If you would ask an artist about his latest painting, it would be probably the same  this is the burden of all creative jobs! On the other hand, if it wouldn´t be like that, if you aren´t hungry for more challenges, then you can sink into complacency  into meaninglessness! Because if there is no need for you to change something, then everything stays the same because the world is nice as it is But now I have to stop because Im getting too philosophical, but maybe this does answer the question of what my job entails: never stop pushing the designers to new limits! How was the reaction from Brazil, where it was first unveiled in public? At first, they were a little bit sceptical about how BMW will bring their standards in terms of quality and value into the small engine displacement category, but after the BMW Concept Stunt G 310 was unveiled they were quite a bit surprised: if this is BMW´s answer for that Segment, then welcome to Brazil, BMW! They are pretty sure now, that if BMW will do a serious production bike in this class it will become the benchmark in this new segment. Apart from the Brazilian national colors, what other paint scheme do you think would look great on the G 310? I dont know, but I guess you can compare this bike with a beautiful woman. If the shapes are nice, you can dress her up with anything and she still looks great!

Find out more about the BMW Concept Stunt G 310 at