It came with a 90/90 S21 front tire and a 130/80-17 rear tire. Stopping was achieved via Single ∅300mm disc, 2 piston caliper in the front and a Single ∅240mm disc, 1 piston caliper in the rear. The front suspension was a ∅41mm telescopic fork with stabilizer bridge while the rear was equipped with a Spring setting and rebound stage damping continuously adjustable,. The G650GS Sertao was fitted with a 17.3 Liters / 4.6 US gal. fuel tank. The bike weighed just 176 kg / 388 lbs.. 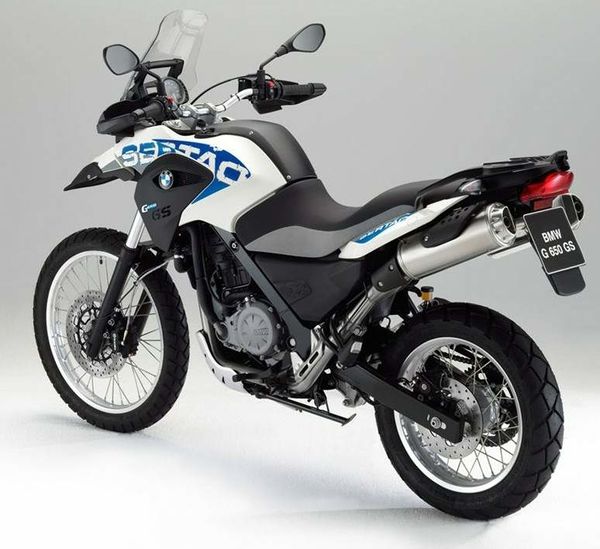 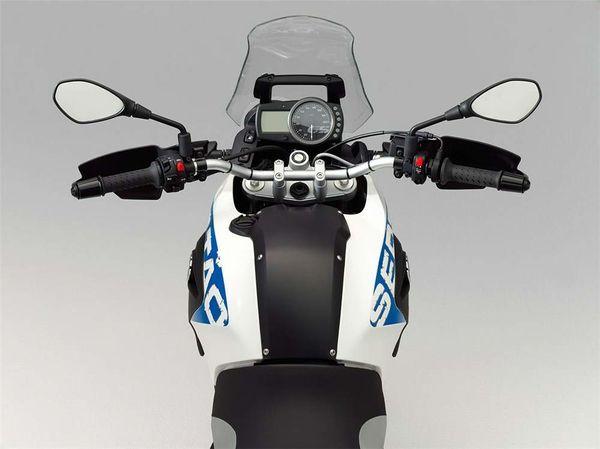 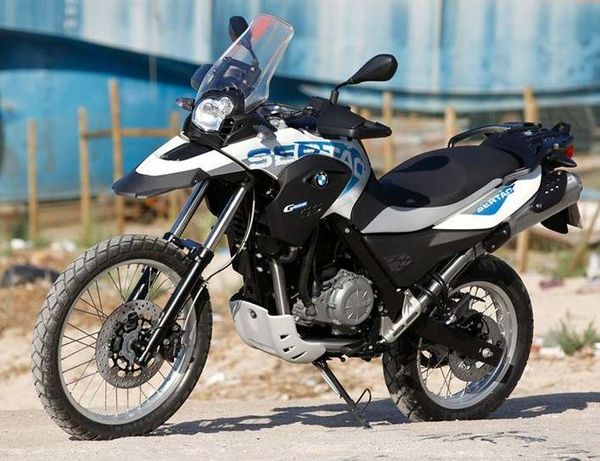 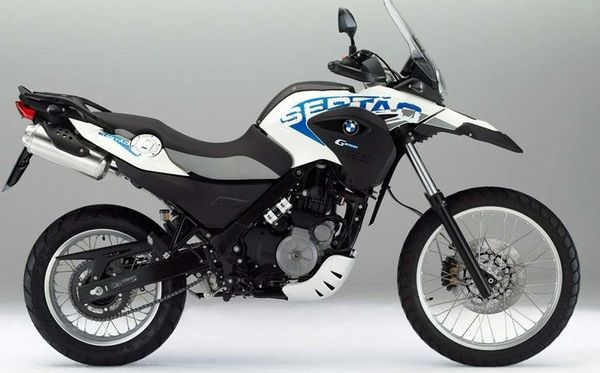 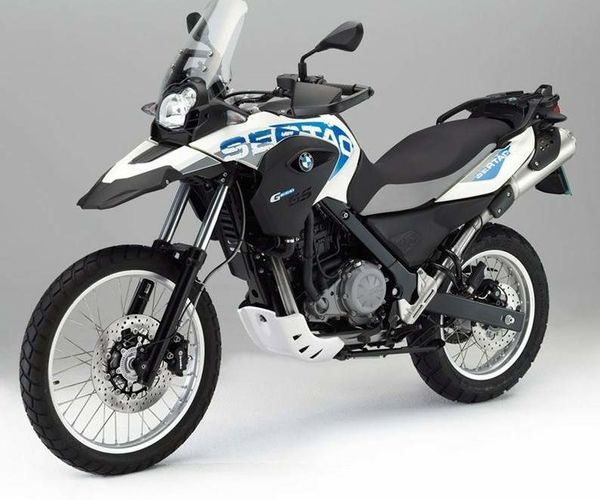 BMW is adding a more off-road oriented sister to their single-cylinder G650GS, named the G650GS Sertão. Portuguese for wilderness, the Sertão uses the same 652 cc liquid-cooled and counter-balanced single cylinder engine as the standard G650GS  producing 48 hp at 6500 rpm and 44 ft-lbs of torque at 5000 rpm  but the chassis and accessories have been updated to provide more off-road ability without sacrificing on-road comfort.

The longer travel suspension gives the Sertão more ground clearance but also higher seat heights. The standard seat is now up 2.4″ to 33.9″ with a 35.4″ bench as an option.

The Sertão comes in Aura white/Arroyo blue color scheme with prominent Sertão lettering. Most of the engine and other components are painted black with a few Nürburg silver elements such as the alternator and clutch covers.

With its new BMW G650GS Sertão, BMW Motorrad has added a new, sporting chapter to the history of single cylinders in the BMW GS family. Whereas the G650GS thrilled riders with its lean, wiry offroad stature, the G650GS Sertão promises even more sporting characteristics, even greater offroad capabilities, and an even stronger desire for adventure. And all of this without any sacrifice to the established virtues of a BMW single cylinder endure such as everyday practicality, appealing price-performance ratio, and playful riding properties.

Whereas the G650GS chassis was developed primarily for country roads and light offroad use, the Sertão presents far greater offroad practicality in the form of longer spring travels and tighter tuning. In addition, it is fitted with wire spoke wheels.

The essential features of the new BMW G650GS Sertão at a glance:

Sertão is Portuguese for hinterlands or back country, particularly the arid badlands of northeastern Brazil, the sort of place the new offroad-ready G 650 GS Sertão is designed to explore. From 2000-2010, the rock-hopping variant of BMWs F 650 GS was called the Dakar, after the legendary rally that ran from Europe to the capital of Senegal, honoring Richard Saincts back-to-back wins on a BMW F 650 RR in 1999 and 2000. Security concerns in Western Africa forced the cancellation of the Dakar in 2008; it was moved to South America in 2009, where it has been run since. Although it now takes place in a different hemisphere, the Dakar Rally has kept the same name and Bedouin logo. Perhaps because KTM has dominated the past 11 Dakar rallies, BMW opted for a new name for its taller, beefier G 650 GS while still giving a nod to South America, where the 2012 GS Trophy competition will be held. For several weeks last summer, I had a crush on the G 650 GS, swooning over its light weight, nimble handling and peppy, fuel-sipping 652cc single (Rider, November 2011). Partial to adventure motorcycles with offroad prowess that matches their styling, my heart throbbed again when the Sertão was unveiled. Its $800 premium over the base-model G 650 GS is money well-spent: spoked wheels and more suspension travel for better bump absorption, and a rugged front fender extension, taller windscreen, hand protectors and engine guard to defend body and bike from harm and the elements. After exploring muddy trails and gnarly roads during the bitter-cold press launch, hosted by RawHyde Adventures, we swapped our test bike for one shod with Metzeler Karoo knobbies rather than the standard-issue, street-biased Tour­ances. Then I blasted off on dual-sport rides, first in the Angeles National Forest with a group from the local BMW dealer­ship, then in the Mojave Desert, where my buddies and I visited test-plane crash memorials Compared to the regular G 650 GS, the Sertãos larger diameter front wheel (21 vs. 19 inches) and different chassis geometry slows its steering somewhat. The Sertãos 8.3 inches of front/rear suspension travel (up 1.6/1.8 inches) lessens rake (28.1 vs. 29.2 degrees), adds trail (4.8 vs. 4.5 inches) and extends the wheelbsase (58.4 vs. 58.2 inches). The long-travel suspension soaks up bumps very well without bottoming, though the only adjustment is rear preload. The Sertão also has more ground clearance (9.5 inches laden) and a 2.4-inch taller seat height (33.9 inches), though the seat-peg relationship is unchanged so theres no additional legroom when seated. The seat has supportive padding and a grippy surface. We didnt get a chance to test them, but two accessory seats are available: a tall seat (35.4 inches) and a single seat with lockable luggage compartment. Though knobbies make things a little squirmy, the Sertão is just as much fun on the street as its sibling. A wide handlebar, skinny tires (90/90-21 front, 130/80-17 rear) and light weight with a low center of gravity (fuel is stored under the seat) make it easy to toss around. Those qualities also make it nimble off-road, where line selection and last-second corrections are accomplished with ease. And the big red button on the left handlebar simplifies turning off the ABS for offroad riding. The liquid-cooled, fuel-injected single, good for 43 horsepower and 38 lbs/ft of torque at the chain-driven rear wheel, works hard without complaint or excess vibration. The five-speed transmission shifts cleanly, but I wished for a sixth gear at freeway speeds. Whereas the light-action, cable-actuated clutchs lever is adjustable, oddly, the front brakes lever is not. The single front disc brake provides sufficient stopping power with good feel; using the rear brake helps, though the ABS kicks in early. Long stretches of stand-up riding gave me a different perspective on the Sertão. Being 6-foot, 1-inch tall, I had to lean forward and arch my back to reach the handlebar and work the levers, which I rotated downward (Torx wrench required!). If the Sertão was mine, Id add a set of adjustable bar risers to allow normal height on the street and raised height on the trail. The narrow footpegs made the arches of my feet ache when standing (even with the rubber inserts installed, which I soon ditched for more grip), so Id swap them for wider ones that pivot. Our test bike included the $300 Standard Package, which adds heart-warming heated grips and a gear-powering 12V socket. Of course, BMWs accessory catalog is overflowing with farkles. During our test of the base-model G 650 GS we averaged 57.3 mpg on regular unleaded, but for the first 500 miles of the Sertão test we averaged just 49.2 mpg. Even taking into account heavy throttle, heavier test riders and aggressive knobbies, thats a huge difference. Leery of BMWs claim that the Sertão yields 74 mpg at 55 mph, I filled the tank, rode 50 miles north on Highway 101 at 55 mph, turned around and rode 50 miles back. And when I topped off again, it had gotten 74.4 mpg! With knobbies! If you want to get 270-plus miles out of the 3.7-gallon tank, ride slowly. The 2012 G 650 GS Sertão continues BMWs lineage of adventure-oriented singles that goes back to the 1993 F 650 Funduro. Remarkably, the Sertãos $8,650 base price is just $50 more than the original F 650 Dakar, yet ABS is now standard. As a budget Beemer, instrumentation is basic, with an analog speedo paired with an LCD display (tach, dual tripmeter, odometer and clock). The hard-to-read vertical bar tachometer ought to be a fuel gauge (a fuel tripmeter starts when the low-fuel light comes on), and a go-anywhere bike like this should have an ambient temperature gauge and a freeze-warning indicator. But the bottom line is that cheers for the Sertão greatly outnumber jeers. It has most of what you need, little of what you dont (especially excess weight) and is more fun than watching the Puppy Bowl on Animal Planet. With a few personalized modifications for offroad riding and some luggage, it would be almost perfect. Hmmmwhat about a Sertão project bike and tackling the Oregon Back Country Discovery Route Source