Power was moderated via the Single plate, dry.

It came with a 3.50 - 19" front tire and a 3.50 - 19" rear tire. Stopping was achieved via ∅200mm Drum duplex full hub in the front and a ∅200mm Drum simplex full hub in the rear. The front suspension was a Telescopic front fork with hydraulic damping; plunger type while the rear was equipped with a Spring with coil compression springs and rubber deflection stops. The R68 SDT Special was fitted with a 17 liters / 4.4 US gal fuel tank. 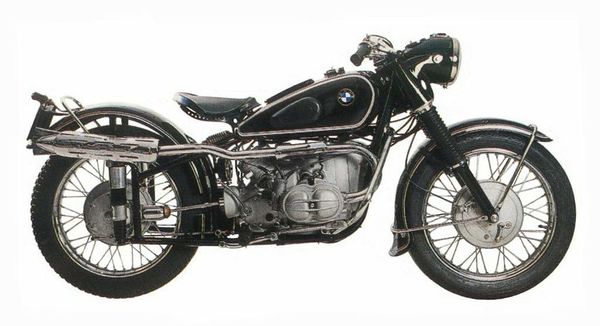 Perhaps the most exhaustive discussion of the R68 is found in Bruce Preston's 1996 book, BMW Motorcycles: the Complete Story, which is have quoted below from a chapter entitled, The 100 mph Motorcycle:

A year after the new 500 and 600cc machines appeared on the market, BMW announced the arrival of an immediate teaser: the R68. Introduced by the company as "The 100 mph motorcycle," it delighted BMW fans the world over. It came in two guises, one for road and one for cross-country use, with the track version sporting an upswept siamesed exhaust system, wider handlebars, a separate pillion pad and a raised rear number-plate. Conventional exhaust pipes were used on the road version but the pipe was slightly larger than that on the touring machines, as many an owner found to his cost when trying to fit R67 silencers onto an R68.

The cross-country machines used a single-fin type silencer, with the twin pipes crossing over the top of the engine and exiting on the right. It made a lovely, flat, muted sound. The new torpedo silencers were used on the R68 but had a slightly greater diameter to fit the larger exhaust pipe. Those silencers were to characterise the remainder of the production run until 1969. A finned ring retained the exhaust to the head  a system that is used right to the present day  which is no easier to undo without a special spanner now than it was then. Dimensions of the new R68 were identical to those of its softer stablemate, the R67, with the same bore and stroke and electrics. Where it differed was in the engine internals. The compression ratio was raised to 7.7:1 and larger 26mm Bing carburetors were fitted. Internally the most interesting change was to the rear main bearing which was now fully floating, an arrangement which allowed for a little crankshaft flexibility. A reinforced crankshaft housing was also used.

The power output received a considerable boost from the more efficient engine, and 35 HP was claimed at 7,000 rpm. It was the greatest power and highest revs yet seen on a road-going BMW and gave the bike a top speed of 100 mph (160 kph). By the standards of the day there were machines around, notably the Vincent and the more sporting British twins, that could do better than this, but it was the way that the R68 achieved it which made it such a pleasing bike to ride.

As an aid to engine flexibility, an additional ignition control fitted on the handlebars gave the rider the option of retarding the ignition for cold starting (the R68 had three degrees more advance with the advance and retard bob-weights at rest than the touring machines). It also proved useful for coping with some of the inferior fuels around, again by retarding the ignition a little.

Deeply valanced mudguards had become a feature of the touring machines but on the sports model less ample ones were considered appropriate. A chrome-plated grab rail was an interesting addition to the specification, doubtless proving useful when hauling the off-road version out of deep mud. Narrower sports handlebars were fitted to the machine and adjustable pillion rests were extolled as a virtue. The lugs for those rests were a part of the touring models - not surprisingly, as it used the same frame - but the rider would have had to pay extra if he wanted the footrests as well! The recently introduced twin leading shoe front-brake was a standard fitting.

Small numbers of the R68 in ISDT trim, which was how the bike with the upswept pipes was defined, were used in these gruelling trials events by amateur owners. For a machine that was really all wrong for the type of going encountered it did well. One British owner, Geoff Arkle, took his over-the-counter R68, which weighed in at 425 pounds (193 kg), through the 1954 ISDT in Wales and finished the course. It was quite an achievement for a rider with no works support.

When the R68 was replaced by the new generation R69 in 1955, just 1,452 (sic) examples had been made. The price was rather more than that of the touring models and not many were brought into Great Britain. As is so often the case, very few are seen around nowadays but there is no shortage of prospective customers should one come on the market.