Power was moderated via the Wet, multidisc.

It came with a 3.00-18 front tire and a 3.25-18 rear tire. Stopping was achieved via Single 260 mm Disc in the front and a Drum, 156 mm Ø in the rear. The front suspension was a Hydraulic telescopic forks while the rear was equipped with a Swinging arm with double adjustable shocks and concentric springs. The 250 Quattro was fitted with a 11.5 Liters / 3.0 US gal fuel tank. The bike weighed just 125 kg / 275 lbs. 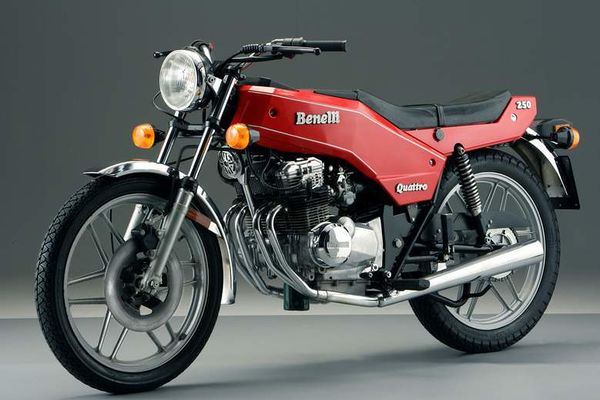 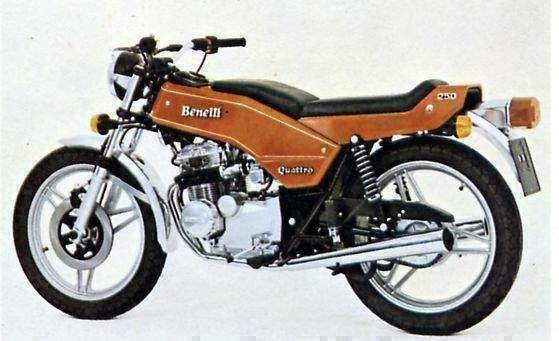 In a completely different sector of the market to its two-stroke stablemate is the Benelli 250/4 which is, as its name suggests, a four-cylinder bike of approximately 250cc. Like the larger six-cylinder 750 Sei, the 250/4 is an undeniably extravagant bike and that is something which is reflected in its astronomical price, a figure which is almost twice that asked for the CE Benelli. It is not in performance where the four-stroke four has an advantage for, with 26.5 bhp and a top speed of just on 90mph, the CE gives nothing away at all. What is interesting is that the four-cylinder 250 is almost 50 lb lighter than the CE and in every dimension is a very small bike indeed.

The heart of the bike is an overhead-camshaft engine which looks something like a miniature 500 Honda unit and is, in fact, of basically the same design. Maximum power is produced at 10 500 rpm but the engine is safe to over 11,000 where it makes a sound like a noisy sewing machine. If the engine is not revved to its full potential, the fuel economy is excellent and far better than anything possible with an engine of two-stroke design. Apart from the engine, most other parts of the bike are of conventional design with a front disc, rear drum and standard oil fork dampers and swinging arm. The designers have, however, made the small Benelli appear as modern as possible with a one-piece tank/seat/rear fairing unit. Set in a panel in the front of the tank unit is the instrument nacelle with a tachometer and speedometer. Unfortunately, however neat it looks, the dials are hard to see and take ones attention away from the road.

To finish the modern appearance there are cast-alloy three-spoke wheels which look a little odd but are strong and easy to clean. As with the CE, a Moto Guzzi version of this bike is available, called the 254. Its styling is a little different but again is merely badge engineering.  The company did experiment with a bike powered by two of the little 'fours' mounted together to make a 500 V8, but the costs were prohibitive, while a 125cc 'four' developed at the same time as the 250 was thought to be just too extravagant.