It came with a 120/70 -ZR17 front tire and a 190/50 -ZR17 rear tire. Stopping was achieved via dual 320mm discs, 4-piston calipers in the front and a single 240mm disc, 2-piston caliper in the rear. The front suspension was a 50mm Marzocchi upside-down fork while the rear was equipped with a adjustable mono-shock.

The 2010 MY Benelli TNT 899 Sport is one of the most powerful 900cc-class production motorcycles available for purchase. It sports a liquid-cooled, four-stroke, 899cc, transverse three cylinder powerplant mated to a six-speed manual transmission, that can reach a maximum power output of 131 horsepower and 90 Nm of torque.

Also, it comes standard with race-derived features such as a 50mm Marzocchi upside-down fork, an adjustable mono-shock in the rear, a braking system with dual 320mm discs in the front, ABS, an under-belly, under-seat exhaust system, a digital instrumentation panel and wide handlebars. 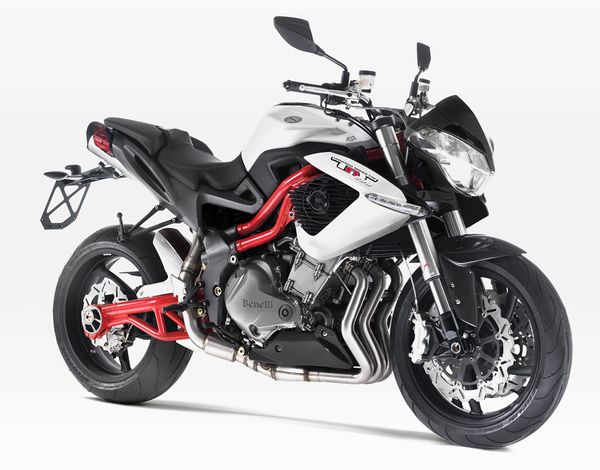 The 2012 MY Benelli TNT 899 Sport boasts standard features such as a 50mm Marzocchi upside-down fork, an adjustable mono-shock in the rear, a braking system with dual 320mm discs in the front, ABS, an under-belly, under-seat exhaust system, a digital instrumentation panel and wide handlebars.

In the tech/engine department, it comes with a liquid-cooled, four-stroke, 899cc, in-line three cylinder powerhouse paired to a six-speed manual transmission, and can produce a claimed 131 horsepower and 90 Nm of torque.

At a first glance you immediately know that this is no Japanese machine and doesnt even intend to get close to that image considered by many simple and uninspiring. What the two Benelli models try doing is individualizing themselves in the world of stylish, aggressive and powerful three-cylinder powered machines. Relying on their fuel-injected 899cc liquid-cooled, three-cylinder, four-stroke, twelve-valves, DOHC engines and on the versatile chassis to conquer the aimed market segment, both the normal and the s versions of the Benelli Tornado Naked Tre 899 will have to fight the finesse, heritage and immediate attraction that come with the name Triumph.

This takes us to the bikes strongest and most challenging competitor. It is quite difficult to set the Tornado against either the Speed Triple 1050 or the Street Triple 675 because Benellis 899ccs position it just between the two as an option for potential customers who search for a middle way.

But it is well worth taking in consideration the fact that the Triumph Street Triple, a naked motorcycle powered by the famous 675cc liquid-cooled, DOHC, in-line three-cylinder engine being fed through a multipoint sequential electronic fuel injection develops an incredible 107bhp compared with Benellis 114bhp. I reckon that the extra displacement doesnt pay off in the case of the subjects of todays review, but their efforts couldnt have been unappreciated as the results are quite remarkable.

Clearly setting it apart from the recently-appeared competitor are the British bikes compactness, style and proved road abilities, while the Tornados would have to prove that through the test drive opinions and the number of salves.

Until getting a feel of the bike, we can just admire its personality and aggressive character exposed through its radical design. We never underestimated the Italians talent when it comes to taking a white sheet of paper and turning it into an entire generation of bikes, but this is one demonstration of power. In fact two, I could say as there are clear design differences between the Tornados Naked Tre 899 and the Tornado Naked Tre 899s. The first is a roadster featuring an angry looking headlight, wide and yet small side fairings painted in the colors of the gas tank. Their purpose is to uncover to our eyes the source of entertaining, I mean the three-cylinder engine and the exhausts way under the seat.

Having a massive 17 Liters

gas tank, the Tornado clearly indicates the fact that it was built for sport-touring, only that it misses a wind-protective front fairing and windshield which is a thing pretty much expected from Italian bikes as nakedness is the key to their entire success.

The seat looks well accommodating and at 780mm above ground, it is perfect for the average sized rider and if you were expecting for it to have a suddenly ending rear end, well it has it and it doesnt. There is enough room for the passengers but there, but it looks like the rear end of a fully-faired previous-generation Japanese bike.

Wheels on both models feature 17 in diameter and the difference between the simple and the s model is the fact that this last comes painted in an aggressive orange paint scheme it is more compact and implicit better handling.