The V Due is a 500cc V-twin two-stroke motorcycle manufactured by Bimota. The bike was first manufactured in 1997. The first and only production run created 340 bikes. The initial attraction of the V Due was that it utilized an electronic fuel injection system which Bimota created to meet restrictive emissions standards in both the EU and in North America.

The unconventional fuel-injected two-stroke motor presented problems for Bimota who, being a small company to start with, needed to create from scratch and test this new engine. On top of that, the V Due was the first bike that Bimota attempted to manufacture entirely on its own without using previously designed and produced engines from other motorcycle firms (Yamaha, Kawasaki, Ducati, Suzuki, Honda).

The resulting motorcycle found its way into an eager European market in 1997 only to encounter several major problems. Immediately consumers had major complaints about the performance of the bike and specifically in relation to the newly implemented fuel injection system. Shortly thereafter the V Due was recalled by Bimota. This is what ultimately put Bimota out of business in 1999.

After going bankrupt a private company bought most of the remaining V Due bikes and refitted them with carburetors for much more reliability and performance increase. These motorcycles have mostly been sold now and are extremely rare and hard to find. 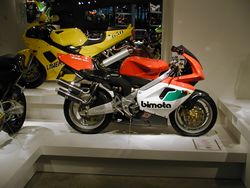 With the 500 90-degree V-twin engine pushing a claimed 82 kW with injection and 67 kW fitted with carburetor and catalyctic converter. With a dry weight of 160 kg it boasted the highest power-to-weight ratio of any production motorcycle when released.