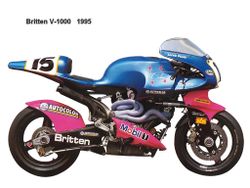 Britten was designed and almost completely hand-built by New Zealander John Britten and his team, the Britten V1000 was one of the world's most exotic and brilliantly engineered motorcycles. It was powered by a 60 degree v-twin. The liquid cooled, fuel injected engine also served as the V-1000's frame, with the Kevlar and carbon fiber rear swingarm and girder style forks mounted directly to the engine. The Model was included in the Discovery Channel's "Greatest Motorbikes Ever"[1]

His bike designs were considered years ahead of his time. The Britten motorcycles were unusual for their heavy use of carbon fiber for the fairing, wheels and swingarm. Britten motorcycles had no chassis in the traditional sense. Instead, the engine behaved as a stressed member of the chassis and each end of the motorcycle was bolted to it. When John Britten tragically died of cancer at the age of 45 in 1995, the motorcycling world lost one of the people with the most vision to change it.