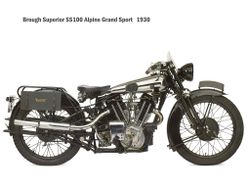 The most famous Brough Superior was without a doubt the SS100. It was produced from 1925 till 1940. It was initially powered by a 980cc V-twin from JA Prestwich (JAP). Each bike came with a signed guarantee from Brough that the bike had been timed at over 100mph for a quarter of a mile. Brough advertised the hands-off stability at speeds of 95mph. Fewer than 400 SS100s were built, the last 100 or so were powered by a Matchless V-twin. Brough constantly changed the specifications of the bike resulting in each one basically being a custom job. In 1928 he introduced an option for rear suspension, foot gear change in 1935, and a four-speed Norton gearbox in 1936.

TE Shaw, aka Lawrence of Arabia owned a series of Superiors (the last of which cost him his life in a crash), which all were fitted with a special stainless steel petrol tank. In 1938 Brough revealed the Dream, which consisted of an exotic flat four engine with twin gear-linked crankshafts. Dev elopement on all Superior's was halted when World War 2 broke out and was never restarted again.

Top model in the Brough-Superior 1930 catalogue, the SS100 Alpine Grand Sports was billed as 'The Machine for Express Speeds with Armchair Comfort' - the 'Armchair Comfort' bit presumably referring to the cantilever rear springing system in which the whole of the rear subframe was pivoted (as it was also in the Vincent, Matchless Silver Hawk, and New Imperial, to name but three) under the control of friction-damped springs below the saddle.

To continue quoting from the catalogue ... 'Its ability to tick over in top gear at 10 miles per hour with scarcely a sound, its flashing acceleration and its effortless surging power output at all speeds, must be experienced to be properly appreciated. It is an 8/50 hp job having roller bearings throughout ...' and so on, and so forth. The words were almost certainly those of master showman George Brough himself, but perhaps the '8/50 hp job' will need a spot of explanation in these modern times. In fact, in early days there was a 'nominal horse power' method of classifying engines, whereby 2.75 hp was roughly 350 cc, 3.5 hp was 500 cc. By this scheme, 8 hp equalled 1,000 cc, but 50 hp was the actual bhp output of the engine. So, 8/50 was a nominal 8 hp producing an actual 50 bhp.

The Alpine Grand Sports originated in 1925, when it was decided to produce a sort of super-SS 100, the JAP factory having gone into production with a sports engine based on feed-back from Bert Le Vack's race successes. The new JAP was of 985 cc with triple valve springs and had roller bearings throughout. To complement the power unit, Brough's devised a new lighter and shorter frame, with Bentley & Draper rear springing, Castle leading-link front forks, and wheels (mounted on knock-out spindles) running-on ball journal bearings. The fuel tank, in this early version, was nickel-plated.

Thus far the new model did not have a catalogue name, but George Brough entered the machine for the Alpine Trial, in which he not only made fastest time of day in the Katzburg Hillclimb, but put up the best performance in the whole trial. So Alpine Grand Sports! What else, indeed?

As the years passed, there were improvements in both the engine and in the Alpine GS as a whole. By 1930, when our example was built, the pushrods were enclosed in tubes, and there were covers over the rocker gear (though the valves still operated in the open air) and the valve mechanism was automatically lubricated. The machine specification embraced a stainless-steel fuel tank holding four gallons, and a special Sturmey-Archer gearbox with chromevanadium shafts and pinions. The box was a three-speed close ratio design, offering 3.5, 5.2 and 8.2 to 1 overall.

The Alpine Grand Sports was to remain in the Brough range until 1935 and in its later form it had acquired a foot-change gearbox, and a 998 cc engine delivering a hefty 74 bhp. This was the 'two of everything' engine, with two magnetos, two carburettors, full dry-sump lubrication, and mammoth bearing surfaces everywhere, and George Brough added a personal note in the catalogue, declaring 'I consider the new SS100 is the most thrilling batting iron I have ever ridden.' But then, he would say that, wouldn't he?

'Have you ever seen such a handsome bike,' asked George, writing about the 1934 Alpine Grand Sports 'so massive, so powerful, yet so small and compact? Its luxurious, effortless, road-gobbling qualities are almost beyond belief...' He would say that, too! 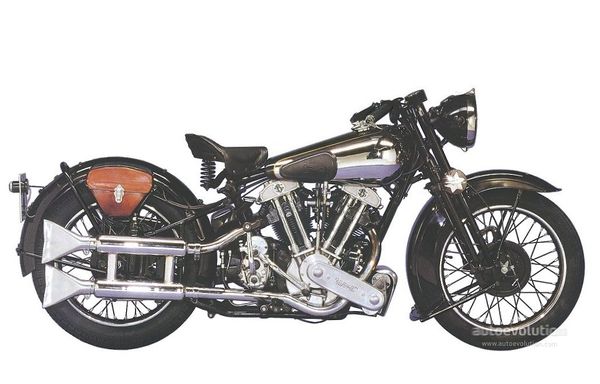 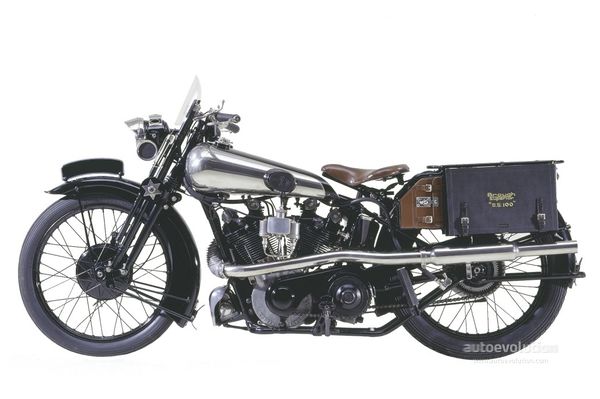 The new Brough Superior SS100 is a wonderful thing and the few lucky people who have the cash available to buy one are going to love it. The fact it’s so well built, so well-resolved is a triumph for such a small outfit. This is the perfect representation of a modern ‘gentleman’s motorcycle’ and the future is bright for the famous Brough Superior brand. Of all the engineering on this bike it’s the 997cc water-cooled V-twin that really stands out. While so many other small companies opt for an ‘off-the-shelf’ motor from one of the many global suppliers, Brough Superior insisted this bike could only exist if they developed their own motor. Work on the engine has been done by Akira Engineering; the same company that builds the factory Kawasaki engines for the World Superbike riders Tom Sykes and Jonathan Rea.

The V-twin motor is smooth, tractable yet still willing to rev out. It’s only when leaving it in too high a gear that any piston slap starts to become a problem.