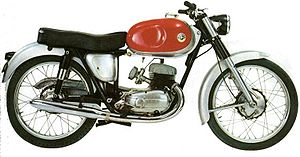 The Bultaco Tralla 101 was a 125cc, 2-stroke, street motorcycle manufactured by Bultaco. The Tralla was the first model produced by the company.

It had good brakes, modern suspension, a four-speed box and a host of goodies which appealed to sporting riders. They sold 1136 of these in their first year of production, the sales being given a considerable boost by their first GP win - a race in which they competed against the DOHC MV and the Desmo Ducati.