From CycleChaos
(Redirected from CDI)
Jump to navigation Jump to search 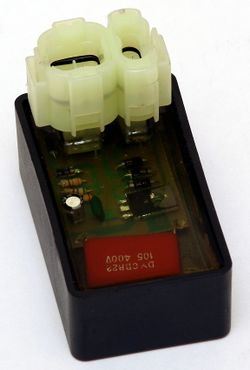 The history of the capacitor discharge ignition system can be traced back to the 1890's when it is believed that Nikola Tesla was the first to propose such an ignition system. In United States patent #609250 first filed February 17, 1897, Tesla writes 'Any suitable moving portion of the apparatus is caused to mechanically control the charging of a condenser and its discharge through a circuit in inductive relation to a secondary circuit leading to the terminals between which the discharge is to occur, so that at the desired intervals the condenser may be discharged though its circuit and induce in the other circuit a current of high potential which produces the desired spark or discharge.'

The patent also describes very generally with a drawing, a mechanical means to accomplish this. In the late 1940s an attempt to make one using mechanical means to trigger the capacitor's discharge was tried. It used extra contact switches in addition to the usual points, but suffered from timing problems and was unreliable. The quest for an electronic means of producing a CD ignition began in earnest during the 1950s. In the mid 1950s, the Engineering Research Institute of the University of Michigan in cooperation with Chrysler Corporation in the United States worked to find a method to produce a viable unit.

They were unsuccessful, but did provide much data on the advantages of such a system, should one be built. Namely; a fast voltage rise time to fire fouled plugs, high energy throughout the RPM range resulting in better starting, more power and economy, and lower emissions. A few engineers and scientists had built CD ignitions throughout the 1950s, using thyratrons which required a warm-up period, and thyratrons were vulnerable to vibration as well. Silicon controlled rectifiers (SCR) or thyristors came later thanks to Bill Gutzwiller and his team at General Electric. These early attempts all suffered from the same problem that made them unable to perform much beyond idling speed.

This was due to 'points bounce' which is a feature of a points triggered system. In the standard points, distributor, coil, ignition (Kettering system) points bounce prevents the coil from saturating fully as RPM increases resulting in a weak spark, thus limiting high speed potential. In a CD ignition, at least those early attempts, the points bounce created unwanted trigger pulses to the thyratron that resulted in a series of weak, untimed sparks that caused extreme misfiring. There were two possible solutions to the problem.

The first would be to develop another means of triggering the discharge of the capacitor to one discharge per power stroke by replacing the points with something else. This could be done magnetically or optically, but that would necessitate more electronics and an expensive distributor. The other option was to keep the points, as they were already in use and reliable, and find a way to overcome the 'points bounce' problem. This was accomplished in April 1962 by a Canadian, RCAF officer F.L. Winterburn working in his basement in Ottawa Ontario. 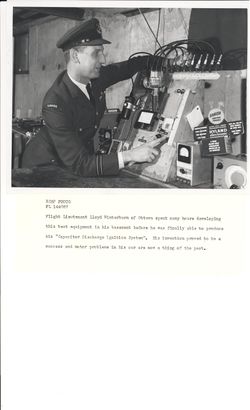 The design used an inexpensive method that would only recognize the first opening of the points and ignore subsequent openings when the points bounced.

A company was formed in Ottawa, Canada in early 1963 called Hyland Electronics building CD ignitions using the Winterburn design. It provided a 75 mJ spark at all engine speeds up to 5,000 rpm on an eight cylinder (10,000 rpm on a 4 cylinder) and consumed only 4 Amps at that speed. Dynamometer testing during 1963 and 1964 showed a minimum of 5% increase in horsepower with the system, with 10% the norm. One example, a Ford Falcon, had an increase in horsepower of 17%. Plug life was increased to at least 50,000 miles and point life was greatly extended from 8,000 miles to at least 60,000 miles. Point life became a factor of rubbing block wear and the life cycle of the spring with some lasting almost 100,000 miles.

The Hyland unit was tolerant of varied points gaps. The system could be switched back to standard ignition by the simple swapping of two wires. The Hyland CD ignition was the first commercially produced CD ignition and retailed for $39.95 Canadian. The patents were applied for by Winterburn on September 23 1963 (United States patent# 3,564,581). The design was leaked to the United States in the summer of 1963 when Hyland exposed the design to a US company in an effort to expand sales. Afterward, numerous companies started building their own throughout the 1960s and 1970s without licence.

Some were direct copies of the Winterburn circuit. In 1971 Bosch bought the European patent rights (German, French, British) from Winterburn as their own CD ignition was based upon the Winterburn design. The first commercial motorcycle using the CDI system was manufactured by Kawasaki. By the end of 1960s, the US government made new laws enforcing strict emission standards. As a result, more and more electronic ignition systems were developed, and starting from 1970s all smaller engines installed CDI system to replace the contact point system, including Honda Cub which began to use AC-CDI system.

Most ignition systems used in cars are inductive ignition systems, which are solely relying on the electric inductance at the coil to produce high-voltage electricity to the spark plugs as the magnetic field breaks down when the current to the primary coil winding is disconnected (disruptive discharge). In a CDI system, a charging circuit charges a high voltage capacitor, and during the ignition point the system stops charging the capacitor, allowing the capacitor to discharge its output to the ignition coil before reaching the spark plug.

The amount of energy the CDI system can store for the generation of a spark is dependent on the voltage and capacitance of the capacitors used, but usually it's around 50 mJ, or more. The standard points, coil, distributor ignition, more properly called the Kettering ignition system, produces 25mJ at low speed and drops off quickly as speed increases.

Most CDI modules are generally of two types:

Note that not all small engine ignition systems are CDI. Some older engines, and engines like older Briggs and Stratton use magneto ignition. The entire ignition system, coil and points, are under the magnetized flywheel.

Another sort of ignition system commonly used on small off-road motorcycles in the 1960s and 1970's was called Energy Transfer. A coil under the flywheel generated a strong DC current pulse as the flywheel magnet moved over it. This DC current flowed through a wire to an ignition coil mounted outside of the engine. The points sometimes were under the flywheel for two-stroke engines, and commonly on the camshaft for four-stroke engines. This system worked like all Kettering (points/coil) ignition systems... the opening points trigger the collapse of the magnetic field in the ignition coil, producing a high voltage pulse which flows through the spark plug wire to the spark plug.

If the engine was rotated while examining the wave-form output of the coil with an oscilloscope, it would appear to be AC. But you must consider that since the charge-time of the coil corresponds to much less than a full revolution of the crank, the coil really 'sees' only DC current for charging the external ignition coil.

Some electronic ignition systems exist that are not CDI. These systems use a transistor to switch the charging current to the coil off and on at the appropriate times. This eliminated the problem of burned and worn points, and provided a hotter spark because of the faster voltage rise and collapse time in the ignition coil.

Advantages and Disadvantages of CDI[edit]

A CDI system has a short charging time, a fast voltage rise (between 3 ~ 10 kV/μs) compared to typical inductive systems (300 ~ 500 V/μs) and a short spark duration limited to about 50-80 µs. The fast voltage rise makes CDI systems insensitive to shunt resistance, but the limited spark duration can for some applications be too short to provide reliable ignition. The insensitivity to shunt resistance and the ability to fire multiple sparks can provide improved cold starting ability.

Since the CDI system only provides a short spark, it's also possible to combine this ignition system with ionization measurement. This is done by connecting a low voltage (about 80 V) to the spark plug, except when fired. The current flow over the spark plug can then be used to calculate the temperature and pressure inside the cylinder.