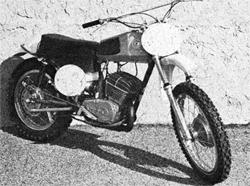 It was hard to believe that CZ would foist a pile like this CZ250 enduro mid-1970s bummer off on the public, but they did. Seeing a chance to get a piece of the enduro market, they simply took a late '60s frame, a dated engine, electrics that would have trouble lighting-off an .049" model airplane engine and suspension components that did little more than hold up the bike.

It had rigid footpegs, a huge, bulbous tank, an exhaust that burned the leg, a speedo that didn't work and various bits and pieces that were attached with pure afterthought technology. The first time I fired up our test bike, the horn fell off on the ground. After I rode the bike 100 yards, the battery fell out and the wiring loom melted. In the next 20 minutes, the plug cap came off, the air filter fell off, the muffler cracked and wedged into the rear wheel, the gas cap leaked, both fuel lines cracked, a tire went flat and the throttle stuck wide open.

The feeble engine was also horribly over-geared, the kickstarter would stick on the frame, fork seals weeped like a garden hose and the motor mounts fell out. This mount signaled the beginning of the end for CZ sales in the United States, and rightfully so.

The engine was a air cooled single cylinder, two-stroke. A 66.0mm bore x 72.0mm stroke result in a displacement of just 246.0 cubic centimeters. Fuel was supplied via a port control.