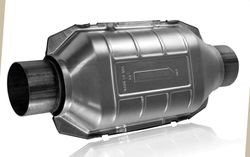 Carbon monoxide is a poison for any air-breathing animal. Nitrogen oxides lead to smog and acid rain, and hydrocarbons produce smog. In a catalytic converter, the catalyst (in the form of platinum and palladium) is coated onto a ceramic honeycomb or ceramic beads that are housed in a muffler-like package attached to the exhaust pipe. The catalyst helps to convert carbon monoxide into carbon dioxide. It converts the hydrocarbons into carbon dioxide and water. It also converts the nitrogen oxides back into nitrogen and oxygen.

As a general principle, a catalyst allows chemical conversions to desired products to occur more rapidly and at lower temperatures. For this reason, in addition to pollution control, industrial catalysts find use in a wide field, be it the processing of petroleum to produce transportation fuels or the production of chemicals including polymers and pharmaceuticals.

Ideally, the catalyst itself is not chemically consumed during this process. Automotive emissions catalytic converters consist of special combinations of precious metals such as platinum, palladium and rhodium dispersed on high surface area carriers which in turn are coated onto the walls of ceramic or metallic monolithic structures. In the modern three-way catalytic converter, uncombusted fuel residues are oxidized with oxygen to produce carbon dioxide and water, nitrogen oxides are converted to ubiquitous nitrogen, and toxic carbon monoxide is oxidized with oxygen to carbon dioxide. Like this, a typical catalytic converter is capable of destroying around 98 percent of hydrocarbons, carbon monoxide and nitrogen oxides produced by the car's engine.

The principle of a catalyst may be simple, but it's the details of the technological implementation that cause the headaches. The catalyst needs the right operating temperature and an accurately adjusted residual oxygen content in the exhaust gas. In today's catalytic converters, the oxygen content is measured and regulated by lambda sensors. Through a computer controlled feedback system the mixture of air and fuel entering the engine is adjusted to meet the requirements for the three-way catalyst to function.