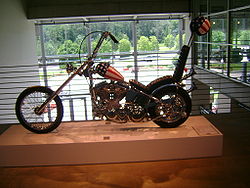 A Choppers is a radically customized motorcycle, archetypal examples of which are the customized Harley-Davidsons seen in the 1969 film Easy Rider. Many of today's custom motorcycles are sometimes mistakenly called choppers, but a truly custom-built motorcycle has additional - usually chrome - accessories and billet parts added on to the bike for aesthetic value, while originally such modifications were purely functional in nature.

In the post-World War II United States, servicemen returning home from the war started removing all parts deemed too big, heavy, ugly or not absolutely essential to the basic function of the motorcycle, such as fenders, turn indicators, and even front brakes. The large, spring-suspended saddles were also removed in order to sit as low as possible on the motorcycle's frame. These machines were lightened to improve performance for dirt-track racing.

Forward-mounted foot pegs replaced the standard large 'floorboard' foot rests. Also, the standard larger front tire, headlight and fuel tank were replaced with much smaller ones. Many choppers were painted preferably all in either flat black or in shiny metallic “metal flake” colors. Also common were many chromed parts (either one-off fabricated replacements or manually chromed stock parts). According to the taste and purse of the owner, “chop shops” would build high handle bars, or later “Big Daddy” Roth Wild Child’s designed stretched, narrowed, and raked front forks. Shops also custom built exhaust pipes and many of the “after market kits“ followed in the late 1960s into the 1970s. Laws required (and in many locales still do) a retention fixture for the passenger, so vertical backrests called sissy bars were a popular installation, often sticking up higher than the rider's head.

While the decreased weight and lower seat position improved handling and performance, the main reason to build such a chopper was to show off and provoke others by riding a machine that was stripped and almost nude compared to the softer-styled stock Harley-Davidsons, let alone the oversized automobiles of that time.

In the United States servicemen returning from World War II were looking for a thrill. Many veterans had been trained to work on automobiles and motorcycles and were looking to add a little excitement to their post-war lives with their newly acquired mechanical skills. Motorcycles and Hot Rods were the perfect hobby for them. Motorcyclists bought up surplus military bikes and removed all the unnecessary parts like windshields and saddlebags to minimise weight. Rear fenders were "bobbed" or shortened just enough to handle a passenger and keep the rain and mud coming off the rear wheel from hitting them in the back and front fenders were removed completely.

This type of home customization led to the rise of the "bobber". Then in the 60s, motorcyclists found that a longer front end allowed the bike to run smoother at faster speeds. The degree of neck rake and length of front end was modified on these bikes with this in mind. The Girder and Springer front ends were the most popular forks for extending in this fashion, although this does make the bike harder to handle at slower speeds.

To build or chop a traditional chopper an unmodified factory bike is used (usually a rigid Harley Davidson) and everything unnecessary to either move or stop is stripped or chopped off. Then the engine and transmission are removed and the frame is cut up and welded back together to make it lower and lighter. Performance parts are added or modified to increase speed. The true function of a Chopper is to make it as fast and maneuverable as possible.

Through the 1950s, '60s and '70s, the chopper grew ever more elaborate, with the movement spreading right across the world. Bars grew higher, as did seat backs, and multi-colored metal flake paint jobs and intricate chrome work or engravings appeared. For many, the definitive chopper, with its high bars, tombstone seat and feet-forward stance, is the Panhead Harley Captain America ridden by Peter Fonda in the film Easy Rider.