Coventry-Eagle was founded by Edmund Mayo in 1890, the Coventry-Eagle factory built an extensive range of two- and four-stroke machines powered by Blackburne, JAP, Raleigh, Sturmey-Archer, Villiers and Matchless engines.

Coventry-Eagle made Royal Eagle bicycles in the 1890s and built their first JAP-powered motorised bicycle around the turn of the century, perhaps 1901. By 1903 they were making motorcycles and by 1916 they had produced quite a variety of machines assembled from mostly proprietory components. In 1921 they were producing 500cc singles and a JAP-powered 680cc V-Twin, and in 1923 introduced the 976cc Flying Eight which competed in both speed and quality with Brough. They continued to expand the range until the effects of the Depression were felt in 1929. Production continued until 1939.

Smaller models included the 1935 150cc Coventry Eagle powered by a twin port two-stroke and with a left hand operated gear change controlling an Albion gearbox, all housed in a pressed steel frame with sprung blade forks and topped by a large VEC headlight. 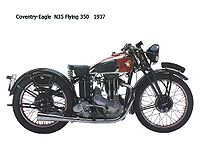