The Crocker Motorcycle Company was an American manufacturer of single cylinder speedway racing motorcycles started by Albert Crocker and Paul Bigsby in 1932. Featuring powerful V-twin road motorcycles from 1936, and the "Scootabout," one of the first modern styled motor scooters, in the late 1930s. Production ceased in 1942.

It has been over sixty years since the last Crocker rolled out of 1346 Venice Boulevard in Downtown Los Angeles, and along the way there has been a dedicated group of enthusiasts who understood the unique qualities of America's first true "Super Bike" and would not let it fade into obscurity.

Crocker started manufacturing powerful V-twins in 1936. Much to Harley-Davidson's chagrin, it was much faster than any tuned Harley (or Indian for that matter), being capable of a genuine 100mph (161 km/h). The Crocker was an expensive limited-production machine, but Walter Davidson was so incensed at its performance that he tried to get production stopped. He threatened Budd and Kelsey-Hayes (who supplied wheel rims to Crocker) and Linkers (carburetors) that if they didn't stop doing so their lucrative Harley-Davidson supply contracts would cease. They agreed, though the Crocker stayed in production for a little while longer.

The torch was taken up by the New "Crocker Motorcycle Company" in 1997 when they first began to produce parts out of sheer love for the machine. After an enthusiastic response to the few high quality parts Crocker had produced for one of America's top restorers, and with inquires from original Crocker owners, it was decided to officially incorporate Crocker Motorcycle Company in January 1999. In 2002 steps began to trademark Crocker Motorcycle Company world wide, an aggressive stance was taken to accelerate their parts making process and the quest was on to create all the parts needed to assemble complete and exact reproductions of both the coveted "Big Tank" and "Small Tank" models. The website was launched and their market grew further still. Crocker's customer base is now worldwide.

Crocker Motorcycle Company produces parts that are exactly as the originals by incorporating "old school" pattern making methods with ultra modern measuring and machining technology. Crocker uses CMM (computer coordinate measuring) and in many cases CNC machining techniques to ensure the exactness of each part they make. Crocker's casting patterns are made by old world craftsmen who have a dedication to making things correctly, rather than quickly. To ensure a strict quality control, Crocker has created an extensive library of Cad-Cam engineering drawings for every part they produce. 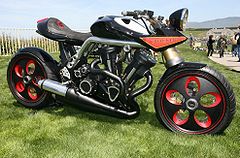 Crocker is also dedicated to the history of the Brand and has amassed a great deal of original brochures, pamphlets, posters, letters, photos, and magazines. They have talked with people who were there and those who saw the rise and fall of the original company. The New Crocker Motorcycle Company has been able to unearth more facts and confirm many others through their extensive research. Crocker Motorcycle Co. is not only historically dedicated to the V-twin street bike but also to Crocker's "Scootabout" scooter and speedway racing machines.

In 1999 a new corporation was formed to manufacture replica parts, and now produces complete Crockers in kit form, following the original specifications.