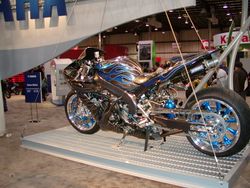 A customized Yamaha with a nitrous oxide tank. 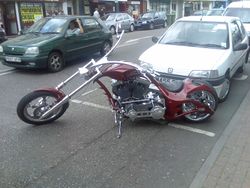 A custom motorcycle in the United Kingdom. 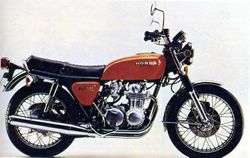 A custom motorcycle is a motorcycle that is highly stylized or which treats aspects such as frame geometry or engine design in an unusual way compared to standard manufacturing. Custom motorcycles are unique or individually produced in a very limited quantity, as opposed to "stock" bikes or "stockers," which are mass produced. In the 1990s and early 2000s, very expensive customs such as those built by Orange County Choppers, Jesse James's West Coast Choppers,[1] Roger Goldammer or Ian Barry's Falcon Motorcycles [2]became fashionable status symbols. There are also companies that are bringing back pin striping, such as Kenny Howard (also known as Von Dutch) and Dean Jeffries from the 1950s, with a continued effort to keep pin striping alive. The choppers of the 1960s and 1970s fit into this category. Jan Bachleda (originally from Slovakia) of JBIKEZ builds highly customized Triumph choppers from the 1970s era.

Some motorcycle manufacturers, such as Harley-Davidson and Honda, include the word "custom" as part of a model name. If capitalized, "Custom" does not denote a custom motorcycle as described above; rather, it is part of the model name of a mass-produced motorcycle.

The factory custom segment has become the most visible in the custom industry in recent years. The original factory custom was the 1971 Harley-Davidson Super Glide, designed by Willie G. Davidson, which, imitating the custom scene of the time, combined the fork from a Sportster with the frame and engine of a big twin Electra Glide, thereby founding a style imitated by many other manufactures ever since.[3][4][5]

Higher volume producers like American IronHorse, Bourget, Big Dog and BMC build custom motorcycles that also must meet basic safety requirements set by the US Department of Transportation. Factory customs allow the buyer to select from a wide range of options, paint styles, engine sizes and accessories while still having the confidence, support, warranty and finance options that typically are associated with major production manufacturers. Factory customs typically do not offer the total individuality of a home built bike or a "one off custom", but they share much of the appeal that comes with a custom bike and many of the benefits of a factory production motorcycle.