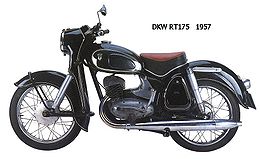 Founded by Danish-born Joerge Rasmussen, DKW was known for their expertise with two-strokes. DKW began building bikes in 1920 and by 1928 had become the world's largest manufacturer with a production of over 100,000 machines. In 1932 DKW merged with Audi, Horsch and Wanderer to form Auto Union, giving the four-circle logo still used by Audi. Numerous racing successes included Ewald Kluge's 1938 Junior TT win on a supercharged 250cc split single. Following the Second World War, the Zschoppau based firm was taken over by MZ, and moved all its facilities to Ingoldstadt, West Germany. In 1957 the firm joined the Victoria and express companies in the Zweirad Union, but in 1966 this was bought by two stroke engine manufacturer Fichtel & Sachs, who dropped the DKW name.

DKW's pre-war RT125 two-stroke was awarded to various Allied manufacturers as war reparations. BSA produced it as the Bantam, the Russians made their own version and for Harley-Davidson it became the Model S, or Hummer, and Yamaha integrated into their first bike ever; the Yamaha YA-1. 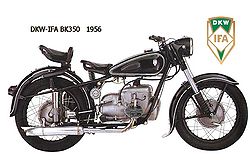