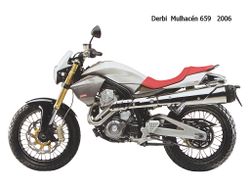 The Barcelona, Spain firm of Derbi's name shows it roots, DERivados de BIcicletus meaning "derivative of bicycles" - which is what they built until producing the 250cc Super in 1950. Early motorcycles included a 350cc twin, but mostly Derbi concentrated on smaller bikes such as their sporty 49cc and 74cc Grand Sports. The firm's successful challenge in Grand Prix racing's smaller classes reached its apex with Angel Nieto winning five 50cc and 125cc world titles between 1969 and 1972, when Derbi pulled out to concentrate on road bikes and motorcross. Over a decade later the firm returned to Grand Prix to win a string of titles with another legendary Spanish rider, Jorge "Aspar" Martinez.