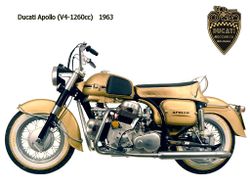 In 1963, Ducati built a V-four-powered prototype in an effort to steal some police-bike business from Harley-Davidson in the United States.

For decades, Ducati experimented heavily with the four-cylinder engines. Ducati's Fabio Taglioni produced as many as 1000 different engine designs during his 30 years as the company's engineering guru (1954 until '84), three of which were fours. The last was the stillborn Bipantah project, killed in '82 on the eve of Taglioni's retirement. The first was his only inline design, the four-cylinder, 125cc GP engine he created in '64, though it was never raced. But the most famous Taglioni four is undoubtedly the Apollo 1260 V-four, built in '63. Few motorcycles have enjoyed as mythical a reputation as the Apollo, the Italian marque's failed attempt to produce a Harley-Davidson-style heavyweight cruiser aimed at the U.S. market. Only two of the 1256cc behemoths were built, one of which is now on display at Ducati's factory museum in Bologna thanks to the generosity of its Japanese owner. No one knows if the second Apollo still exists.