It came with a 120/60 ZR17 front tire and a 160/60 ZR17 rear tire. Stopping was achieved via single 330mm disc, 2-piston caliper in the front and a single 245mm disc, 2-piston caliper in the rear. The front suspension was a 43mm Marzocchi upside-down fork while the rear was equipped with a Sachs adjustable monoshock with progressive linkage. The Multistrada 620 Polizei was fitted with a 1.06 Gallon (4.00 Liters) fuel tank. 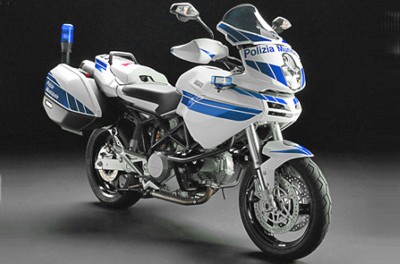 The 2006 MY Ducati Multistrada 620 Polizei has been created especially for law-enforcement units in Germnay, and unlike the base Multistrada 620, has been fitted with hard, lockable side-panniers, a single sear, a rear luggage rack, hand-guards, special warning lights and a special paint scheme. In the mechanical department, it has the same specs as the base model, and can reach a maximum power output of 61 horsepower and 54 Nm of torque.