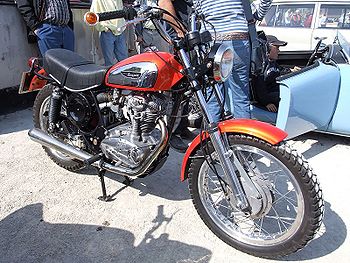 In 1965, the first new concept bike arrived. The 350 Sebring was the largest Ducati of the day. Typically, Ducati built a racing 350 first. The 350 class was not common in the United States, so when Ducati team rider Franco Farne went to America to race at Sebring race, he had to race in an event catering to 251-700 cc machines. Despite the larger capacity opposition, he finished 11th overall and, more importantly, won his own class outright. In honour of Farne's victory the new model became the 350 Sebring. (Footnote: It was common for Italian manufacturers of competition cars or motorcycles to attach to the name their products events they have won.)

By the mid-1960's, production techniques had advanced to the extent that a road Desmo was now possible. Farne's appeared at the April 1966 Modena meeting, riding a prototype 250 cc machine fitted with an experimental Desmodromic head. In 1967 Roberto Gallina and Gilberto Parlotti raced at Modena on 250 and 350 versions

The engine was a air cooled single cylinder, four-stroke. A 76.0mm bore x 75.0mm stroke result in a displacement of just 340.0 cubic centimeters.