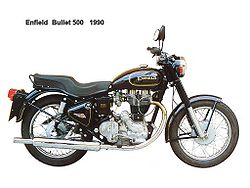 Enfield. The single-cylinder Bullet was one of the most popular models of Britain's old Royal Enfield firm, which had produced the lightweight bike from 1949 to 1961, first as a 350cc and later utilizing a 500cc engine. The Bullet was widely exported and was used by the Indian armed forces. In 1958, production was started in Madras, India using machinery from the old Royal Enfield factory. The 350cc motorcycle sold well in India, and by the mid-1980s it was being exported to many countries including the country of its origination, Britain.

A few years later Enfield began to manufacture the 500cc model, which was also successful, despite it using technology that had been unchanged since the mid-1950s. The pushrod engine produced 22bhp, and was held by a simple tubular steel frame. The domestic bikes weren't changed much, but the firm realized they would have to update the exported bikes to keep up. The improvements included a drastically improved front brake. The Bullet was still very crude by modern standards, with modest acceleration, a realistic cruising speed of 65mph (104kph), considerable vibration and harsh handling. It was however, cheap, economical, reliable and provied an unmistakable classic feel that some riders enjoyed.