Excelsior, based in Coventry, was a British bicycle, motorcycle and car maker. They were Britain’s first motorcycle manufacturer, starting production of their own ‘motor-bicycle’ in 1896. Initially they had premises at Lower Ford Street, Coventry, and 287-295 Stoney Stanton Road, Hillfields, Coventry, Warwickshire before moving to Kings Road, Tyseley, Birmingham in 1921. 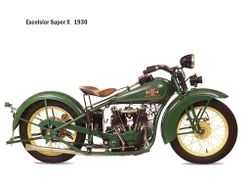 Originally a bicycle company making penny-farthings in 1874 under their original name: Bayliss, Thomas and Co, they later sold bicycles under the names of Excelsior and Eureka and changed the company name to Excelsior Motor Co. in 1910. In the early years of motor-bicycle manufacture they used Minerva, De Dion, MMC and possibly a Condor 850 cc single but went on to produce a wide range of machines with engines from most major manufacturers. In 1914, they offered a JAP-powered twin. A deal to supply the Russian Imperial government with motorcycles ended with the Revolution and Excelsior wound up with an excess inventory as a result.

Excelsior was a key competitor of Harley-Davidson. It produced a full range of machines but failed to survive the Depression, and was closed down by Schwinn in 1931.

This was a bread and butter machine for the Excelsior Manufacturing Company. Most motorcycle companies in the early part of the 20th century produced a standard single cylinder model. Excelsior's manufacturing facility was located in Chicago, Illinois. 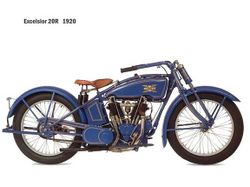 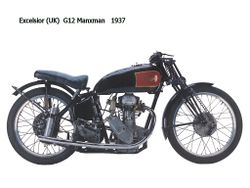