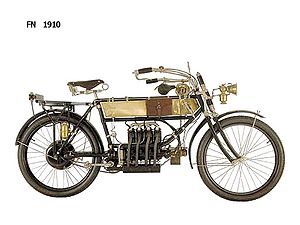 FN (Fabrique Nationale de Herstal) was a motorcycle manufacturer located in Herstal, Belgium and established in 1899.

FN manufactured the world's first four cylinder motorcycle, was famous for the use of shaft drive in all models from 1903 to 1923, achieved success in sprint and long distance motorcycle racing, and after 1945, also in motocross.

The first motorcycles produced were fitted with either 225cc and 286cc single cylinder engines and were followed in 1905 by the introduction of the first of the famous in line four cylinder models displacing either 496cc or 748cc. As a means of promoting the new design M F Osmont rode an example around Europe before arriving outside the Paris Salon for the opening of the 1904 exhibition. In 1909 a new lightweight single cylinder model was introduced weighing 120lbs. 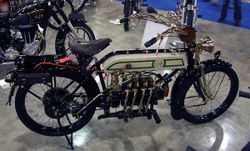 In 1905 the first 362 cc shaft drive in-line FN inlet-over-exhaust four cylinder motorcycle appeared, designed by Paul Kelecom. This was the world's first manufactured four cylinder motorcycle. By 1907 the Four engine had grown to 412cc, and that year's single cylinder 244 cc FN motorcycle was the first bike with a multiple ratio belt drive system, using a patented variable size engine pulley. For 1908, the US Export model began manufacture. The Four had a 493cc engine, and in 1910 that became 498 cc. This bike weighed 75 kg (165 lb) dry, and could do 40 mph (64 km/h).The 1913 Fours had a two speed gearbox and clutch, at the rear of the shaft drive, and bicycle pedals were permanently replaced with footrests from then on. For 1914 the FN “Type 700” 748 cc Four was released, with the gearbox at the rear of the engine. 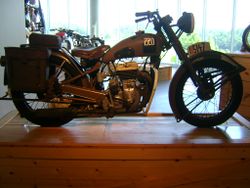 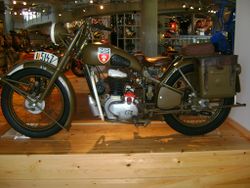 The M13 was built in small numbers for the Belgium Army, with a production run of only 1,030 machines. A simple, rugged machine for general escort duties, this example was built to Military Police specification. The rubber band suspension is an unusual, simple maintenance free design.