From CycleChaos
(Redirected from Flathead)
Jump to navigation Jump to search 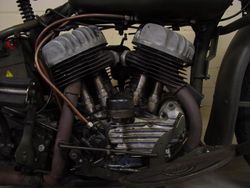 A flathead engine or sidevalve engine (sometimes called a flatty) is an internal combustion engine with valves placed in the engine block beside the piston, instead of in the cylinder head, as in an overhead valve engine. The design was common on early engine designs, but has since fallen from use.

Generally the flathead's valves are carried on one side of the cylinder. A chamber is recessed into the underside of the head to allow the poppet valves to alternately rise from their seats to admit the fuel-air mixture and for the exhaust gases to escape the combustion chamber. This has a number of advantages, primarily making the cylinder head much simpler, without the complex mechanism contained within the head of an overhead valve engine. The head of a flathead engine commonly consists of only a single piece of cast metal.

It also means a valve can be operated by pushing directly up on it, as opposed to needing some sort of mechanical arrangement to push it down or to drive overhead cams, as on a "valve-in-head" engine. It may also lead to slightly easier cooling, as the valves (pushrods are very seldom used, Indian motorcycles are an example) are out of the way of the cylinder, making a cooling jacket simpler to construct. (See limitation below.) The line of intakes along the side of the engine leads to the alternate name L-block (or L-head), due to the cylinders having the shape of an upside-down L. This configuration is also known as (Ford) sidevalve engine.

On the downside, the flathead also requires the airflow to make at least a 90-degree turn to enter the cylinder, which makes it less efficient, colloquially called poorer "breathing". Breathing was not greatly important for early production cars because engines could not run long and reliably at high speed, and most engines had poor combustion, so this was a minor concern given the benefits in simplicity. The maximum compression ratio is also low at only about 7:1, further reducing efficiency (although it means the engine can run on low-octane fuel).

The greatest advancements to flathead engine technology were developed in the 1920s through experimentation by Sir Harry Ricardo of Great Britain, who improved the performance and efficiency of flathead engines by intently studying their flow characteristics. He published his findings, and obtained patents, in 1927. Primarily, his Ricardo Head can be recognized on sight, because he moved the location of the exhaust valve farther from the center of the cylinder than the intake valve (they had previously been symmetrical). He also paid careful attention to the form of the intake and exhaust tracts cast into the cylinder block as regarded turbulence in the intake stream and within the combustion chamber.

A more serious concern is exhaust, which often follows a more complicated path to leave the engine. This increases the tendency for the engine to overheat under sustained heavy use. It is sometimes possible to arrange the sidevalve engine layout so that the exhaust will be taken away through a valve and an exhaust tract located on the opposite side of the cylinder from the intake valve, in which case the layout is referred to as a T-block or T-head. American LaFrance famously powered their production fire engines with T-head motors from the 1920s to the 1950s. The Cleveland Motorcycle Company produced a four cylinder in-line motorcycle using the T-head configuration in the 1920s.

The flathead design also greatly reduced the ability to overbore the engine for performance purposes. Since the piston, exhaust valve, and intake valve were all next to each other, the piston cylinder bore could only be slightly increased, if at all, or it would encroach upon the radii of the intake and exhaust valves, and also cause thin and weak cylinder walls.

Although flathead in-line 4 and 6 cylinder engines were frequently used for automobiles, tractors, etc., the best known flathead automotive engine is the early 20th century Ford V-8, which has both sets of valves (intake and exhaust) located on the inside of the "Vee," and which are all operated by a single camshaft located above the crankshaft.

Due to cooling and efficiency problems, flathead engines fell out of favor in "high power" applications, such as aircraft engines, prior to World War I. However they lived on for some time in the automotive world and were used on the Jeep for instance. Flatheads are no longer in common use for automobiles, although they are still used for some small-engine applications like lawnmowers. Because of their design, the size of valves and the compression ratio are limited, which in turn reduces available power and economy.

The flathead engine saw service in Harley-Davidson motorcycles beginning with the "Sport Model" opposed twin produced from 1919 to1923, and continuing in 1924 with single cylinder export-model 21ci and 30ci singles and continued in the Servi-Cars until 1973. In the domestic U.S. market, the 45ci DL model (1929 to 1931) and its technical descendant, the RL model (1932 to 1936), started Harley's side valve tradition in the 45 cubic inch displacement class. The DL and RL models featured a total loss oiling system and were succeeded in 1937 by the WL 45, which had recirculating oil lubrication. The WL went on to serve in WWII as the U.S. and Canadian Army's primary two-wheeled mount and subsequently as a civilian middleweight through 1952. The engine continued virtually unchanged with various G-based designations in the three wheeled "Servi-Car" until production ceased in 1973.

In 1952, the K series flatheads was introduced, selling in parallel with the W series (which was discontinued after 1952), designed to compete with British sporting motorcycles of the time, as the American motorcycle Association allowed the 750 cc sidevalves to compete against 500 cc overhead-valve bikes. The K models featured a unit construction engine and transmission case, right side foot shift and left side foot brake, and evolved from 45 cubic inch (1952 to 1953) to 55 cubic inches by a 0.75in increase in stroke length (1954 to 1956) over its five year retail market run. The K series was replaced by the overhead valve Sportster series in the retail market in 1957. However, racing versions of the 750 cc K model, designated KR, continued to be produced in very limited numbers for some time after, winning both roadraces and dirt track events against overhead valve bikes limited to 500 cc through 1969, when the American Motorcycle Association finally decided to change the rules and make the venerable flatheads uncompetitive. The K racers were replaced first by the iron-head XR 750cc overhead valve engine, and two years later by the alloy-head XR, which continues in service in flat track racing to this day.

In 1930, the 74ci VL flathead replaced the JD Big Twin, which had featured intake-over-exhaust (IoE) valve configuration. The VL had a single downtube frame and total loss oiling, culminating in an 80ci version (VLH) in 1935. In 1937, that engine was redesigned to include a recirculating lubrication system, and designated the model U, and it went into the same frame and running gear configuration as the model E Knucklehead, which had originated in 1936. The U continued to be produced in varying configurations as a 74& cubic inch U & UL (1937 to 1948), and 80 cubic inch UH & ULH motor (1937 to 1941). By that time, the first year of the aluminum-head Panhead, it had been thoroughly superseded and outsold in the marketplace by the superior performance of the overhead valve model Big Twins.