Since Suzuki is a far smaller manufacturer than Honda and Yamaha, and doesn't have the industrial might that Kawasaki has, they always had to spread their resources alot more carefully. During the late 80s and early 90s the 600cc sportbike class was little more than a sideshow. In 1992 and 1993, Suzuki attempted to use various components from the GSX-R750 in a 600cc bike, but decided to scrape the project for '94. Once the 600 came back in '97 though it was back for good. GSX-R600 Videos

The engine was a liquid cooled in-line four, four-stroke. A 67.0mm bore x 42.5mm stroke result in a displacement of just 599.0 cubic centimeters. Fuel was supplied via a double overhead cams/twin cam (dohc).

The bike has a 6-speed transmission. Power was moderated via the back-torque-limiting clutch.

Suzuki decided to bring the GSX-R600 back from the dead, but this time it wasn't just an afterthought. It still wasn't the main priority and was delivered 1 year after the debut of the '96 GSX-R750. The whole platform was designed with the idea of having a 600cc model. Suzuki retained the GSX-R750 frame but fitted it with a lighter swingarm without upper bracing. This made the bike 0.3 inches shorter than the 750. The GSX-R600 also didn't receive the high-tech inverted fork of the 750 but instead received a conventional Showa fork, along with less exciting four-pot caliphers compared to the six-piston calipers on the 750. 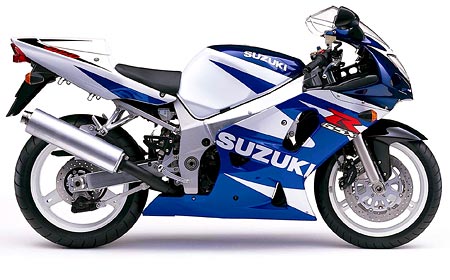 The engine is all-new in its entirety, including the transmission. The aluminum frame and swingarm have been revised as well, to provide a matching response on both track and street. Adjustable suspensions, sport-derived brakes and a new, more aerodynamic bodywork with the classic white, blue and red livery are also included among the goodies the new machine comes with.

2001 ushered in the third generation of GSX-R600s, however, this introduction was largely overshadowed by Suzuki's introduction of the GSX-R1000. This bike broke the 100hp mark for the 600 class and the second successful 600 class bike to be fuel injected - after Triumph's disaster in the TT600. All this from a bike that was playing second fiddle to the GSX-R750.

The 2002 MY GSX-R600 shares the upgrades its bigger 750cc-class sibling introduced, so customers will get new bungee hooks, a cool polished look for the exhaust and will also enjoy the fact that both headlights operate in the low beam mode.

Even though the engine is derived from that of the 750 Gixxer, it has plenty of original components engineered especially for it, and complying with the specific requirements of the supersport class. The 600cc GSX also sports the Suzuki Dual Throttle Valve System which involves a servo motor opening the second valve as the rider's hand pulls the first one's cable, and thus maintaining intake velocity at all engine speeds.

Suzuki GSX-R600 is the 2002 AMA 600 Supersport Champion, so we're dealing with a real racer. This bike brings together racing-grade performance and street-level usability delivered in a package which looks just as good as it feels from behind the handlebars. For the 2003 MY, the GSX-R600 offers a new-generation fuel injection system with a more powerful ECU and improved mapping.

Full adjust-ability for the suspensions is of course, standard, offering riders an easy way to tailor the bike's ground tracking capabilities according to the various riding scenarios. The riding position is still sporty, but offers a comfy ride for daily commuting if you're not living too far from work.

The 2004 MY brings upgrades to the GSX-R600 as well. The Supersport star receives titanium valves for more precise, dependable operation in the high revs range, and an all-new 32-bit ECU which provides better engine and fuel management. At the same time, the 600cc-class Gixxer has a narrower frame which also brought a revised bodywork for improved aerodynamics. The fuel tank is also narrower to help improve air flow.

Radial calipers and masters are also on the menu, for more precise braking and less unwanted flex, and are a great complement to the improved power deployment.

The GSX-R600 needs no introduction, as it is one of the highly popular supersport-class machines of modern history. The 2005 MY just got smarter and will now switch off the headlights during startup, reducing the load on the battery. The bike boasts the same features which made it famous, with a narrow engine which favors aerodynamics, performance-enhancing cylinder coating, a compact build for premium handling at all speeds, on both track and street.

The aluminum frame is similar to that of the original 750 Gixxer and is designed for a racey feel. The adjustable Showa suspensions provide a wide range of settings for multiple riding scenarios while the race-derived brakes offer excellent stopping power.

The GSX-R 600 2006 model is 15 mm shorter in overall length, the seat is lower and generally speaking, the bike has a 5% improvement in aerodynamics.

The 2006 MY GSX-R600 is loaded with a new engine, which has passes through the same overhaul its bigger GSX-R750 brother got. This brings in better fuel injection, better control on the power and torque deployment, enhanced cooling capability, a slipper clutch and a tunable exhaust system.

The bike's frame was also revised entirely, with a new architecture and a new swingarm, also accommodating new suspension elements and new brakes to match the response of the new chassis. And with the new frame, three-way adjustable footpegs also became part of the standard package.

With the success of the liter-class GSX-R, the smallest member of the family could not be left without a hefty infusion of race-proven technology. Multiple findings which helped the GSX-R1000 dominate the race tracks around the world have been downscaled and adapted to fit the 600er machine.

You get race-derived aluminum frame and swingarm, top-drawer dual valve throttle intake, a new rear suspension linkage and reworked Showa suspensions overall for better handling in both civil and race track scenarios. Add in the works-tweaked aerodynamics and the sleek under-engine exhaust for premium looks, too.

The 2008 model year brings upgrades to the entire GSX-R family and the GSX-R600 is not making an exception. Suzuki upgraded the engine and made it more compact, while increasing the responsiveness and the performance. The fuel injection system is of course new, and matches the redesigned combustion chamber and pistons. The whole power plant was redesigned for more power and the new engine management system takes good care of everything. New subframe, bodywork, and fuel tank. Introduction of new Suzuki Drive Mode Selector (S-DMS).

Surely, the frame is also a new one to house the new lump, and race-inspired three-way adjustable pegs are now included on it.

The GSX-R600 is a sport bike from Suzuki's GSX-R series of motorcycles. It was introduced in 1985 and can be considered to be the first of the modern racer-replicas with many race-derived technologies and the looks of a Suzuki Endurance racer at an affordable price. 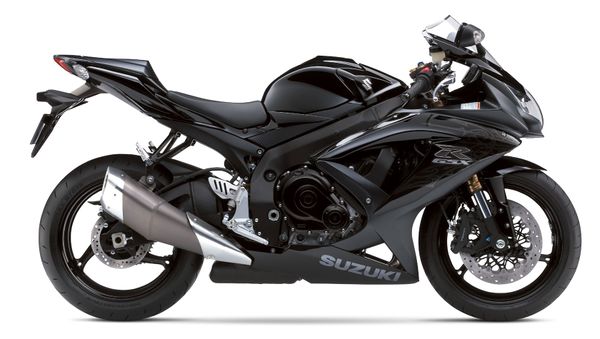 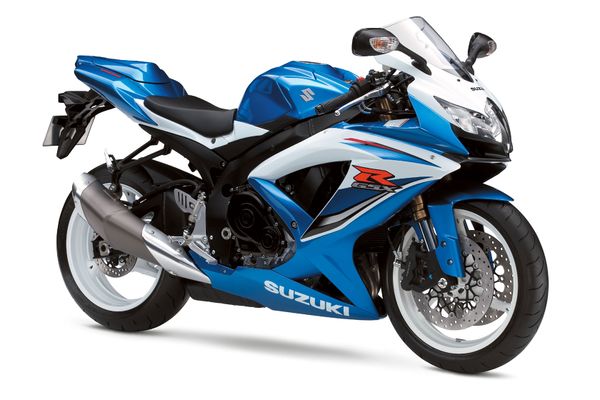 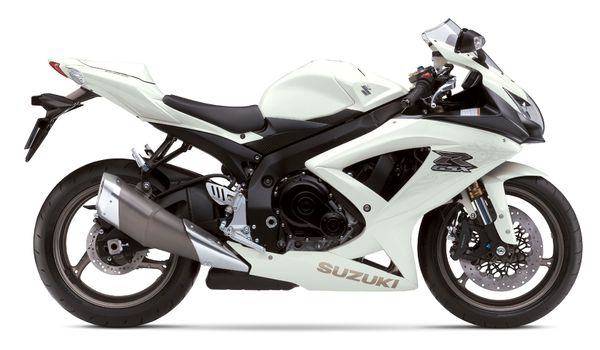 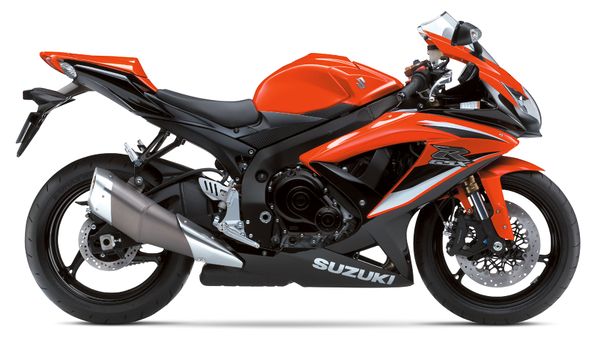 The GSX-R600 is the entry point sport bike in Suzuki's 2009 model year line-up, and the bike retains many of the features which give it an extra edge on the track. Compact ans bold, the GSX-R600 can also be used as a daily city slicer if your commuting is a short-range one.

Battling for the top places in the middleweight sport bike range, the GSX-R600 is often referred to as being a benchmark machine for the class. The new model year doesn't come with huge differences from the previous year bike, but instead offers consistent performance for the daring rider.

The 2010 MY GSX-R600 retains the amazing nerve of this middleweight racer which was tamed a bit for city use. Multiple race-focused features have been kept in place, such as the radial brakes, advanced electronics package, premium suspensions and the chassis-engine combination which proved to be highly-favored one among sport bike enthusiasts.

However, no major technical improvements over previous versions can be recorded for this model, save for some aesthetic upgrades and minor tweaks.

The line between generations begins to blur, receiving mostly incremental updates for a while.

The 2011 MY GSX-R600 packs he same street and track worthiness its bigger siblings have gotten us used to, and is a full-fledged race machine. Smaller and lighter than the liter-class Gixxer, the GSX-R600 is however equipped with the same premium-class components, such as riding modes, dual-throttle valve injection, a 4-into-1 titanium exhaust, a slipper clutch,a comprehensive dash an even and electronic steering damper. No major changes over the previous model years.

The 2012 MY GSX-R600 shares the technological improvements its bigger sisters benefited from thanks to the MotoGP and Endurance racing series. The bike got lighter and thus improved the power-to-weight ratio, dominating the class and providing an even more explosive performance.

Radial monoblock Brembo calipers are also standard, and the frame was renewed to accommodate the new Showa BPF front suspension and new rear monoshock. Lighter pistons, a racing slipper clutch and a host of other more racing-grade upgrades are on the "new items" list for this Gixxer model.

A bike with multiple racing accolades to its name, the Suzuki GSX-R600 remains one of the best-loved Supersport-class street machines ever made. The 2013 MY carries on the successful recipe and refines performance and technology to deliver an even more rewarding riding experience, both on the track and on the urban tarmac.

Add in the Showa Big Piston fork, a precise rear monoshock, a new, shorter frame, radial monoblock Brembo calipers and multiple other race-derived parts for a bike which will feel surprisingly bold each time you throw a leg over it.

The 2014 MY GSX-R600 represents the new-generation of street-going sport bikes, a nifty heritage of more than 1 million Gixxers manufactured and an excellent testimony of motorcycle-making excellence. In the past years, Suzuki has not made dramatic changes to its bikes, and this was compensated by step-by-step improvements and tweaks which allowed the GSX-R600 to keep up with the competition and even dominate racing series.

This machine s equipped with Showa's Big Piston Fork, an electronic steering damper and radial-mount Brembo calipers, being race-inspired... and race-ready straight from the crate.

GSX-R600 is one of the most popular street-legal supersport bikes, and it only gets better and better with each passing year. Because Suzuki is back to MotoGP in 2015, it was natural that one of the liveries evoked the premier class Racing Blue colors. Some of the technologies from MotoGP made it to the GSX-R600 in a form or another, such as the high-tech slipper clutchm Brembo monoblock calipers, Showa BPF suspensions, driving modes, adjustable pegs and more.