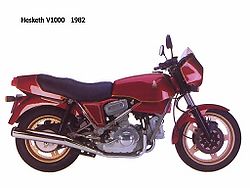 Hesketh or Helketh Motorcycles PLC is a motorcycle manufacturer headquartered in Northamptonshire, England and which concentrates on hand-built four stroke motorcycles for road racing.

Hesketh was developed on the Easton Neston estate, the home of Lord Hesketh, with the prototype running in the spring of 1980 with a special Weslake engine. Lord Hesketh was originally an F1 Grand Prix car racing enthusiast and wanted to use the skills and facilities he had to develop a motorcycle. The V1000 was the first production model. From 1982-1984, Hesleydon Ltd. manufactured the motorcycles and developed the Vampire, a touring version of the V1000. In 1984, Broom Development Engineering took over manufacturing of the motorcycles.