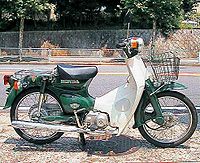 The Honda Super Cub, (originally the Honda C100 or Honda 50) also known as the Honda Cub, was a 49cc OHV 4-stroke street motorcycle model first manufactured by the Honda in 1958, and the biggest selling motor vehicle in history. The Honda 50 triggered the eventual domination of the world motorcycle market by the Japanese, and hence contributed greatly to the rise of their car industry. More than 50 million Honda Super Cub derivatives have been sold worldwide, primarily in Asia, although there were considerable numbers in Europe as well. The model is still in production 50 years later.

The C90 was introduced in 1967, and featured the 89cc OHC engine, and new styling with enclosed front forks (like the contemporary C50 and C65) This replaced the older models in all countries but the USA, which kept the CM91 on sale until 1969.

In 1983, along with the other Cubs, a 12volt electrical system was adopted, with capacitive discharge ignition (CDI).

The C90 Super Cub is still sold in Japan in 2009, along with the C50, but neither are now exported anywhere else. 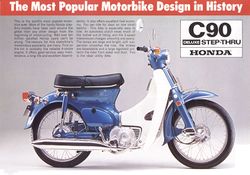 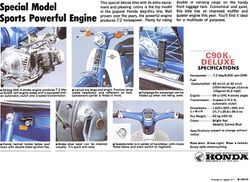