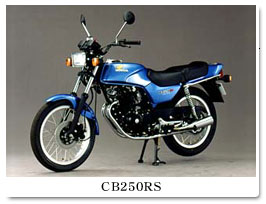 The Honda CB250RS is a 250 cc motorcycle designed for road use. It has a four stroke, four valve, air cooled, single cylinder engine, which was built for the earlier XL250S trail bike. The RS is known for its slim build, with a dry weight of only 128 kg, and nimble handling. The engine featured counter rotating balancers which reduced vibration and allowed a lighter frame. Further weight savings were achieved by making the engine as stressed component. Early models were kick-started (with a completely superfluous automatic decompression lever), while later Deluxe models (designated RS-D) came with electric start and different paintwork. The bike has a front disk brake and rear drum brake, and while it had only a single cylinder, it had twin exhausts.

The engine generates modest power and achieves a top speed of around 150 km/h or 90 mph. Early models sported 26 hp, while later models reached 33 hp. The bike was known for being hard-wearing and reliable. It is also very fuel efficient, achieving up to 70 mpg. One known issue with the bike was that at around 50,000 miles an RS will often suddenly stop and this can usually be traced to a faulty ignition coil in the alternator. The CDI also tended to fail on high-mileage bikes.

Overall the CB250RS is a fun, low cost motorcycle, and has a loyal following among students and delivery riders for both its economical and nimble characteristics. The CB250RS was phased out of production in the mid-late 1980s.